Out of the Cold: Burma and US Take Tentative Steps

Ever since Burma declared martial law in 1988, relations between it and the US have been strained. But as Burma expert David Steinberg writes, with the visit this week by Assistant Secretary of State Kurt Campbell as well as a recent trip by Virginia Senator Jim Webb there are signs of a thaw. Still, such developments only suggest tentative steps in normalizing relations between the two countries. First, while US President Obama has pledged to review US policy with regard to negatively viewed states, there is a limit to how much policy attention can be given to Burma given the size of the other issues gripping the administration presently. Second, the role of Burma’s military junta needs to change before more formal relations can occur, an unlikely event for the moment. In the end, the official US policy remains one of sanctions while fostering dialogue. And so the visits are the first step towards a possible formal dance. But, should Burma change its stance, even embrace democracy in the upcoming elections, it will likely affect not only ASEAN, but also the entire region. The US will need to be prepared to respond. – YaleGlobal

Out of the Cold: Burma and US Take Tentative Steps

Visits by US officials suggest formal dialogue with Burma is possible
David I. Steinberg
Wednesday, November 4, 2009

WASHINGTON: With the trip this week by the first senior US executive branch official to Burma in about fifteen years, Washington has taken an important step. The policy gap between the US and Burma/Myanmar governments is acute, as it has hurt the interest of both sides. It has resulted in intensified Chinese penetration in Burma, affecting regional security and Sino-Indian relations. It solidified both Burmese fear and suspicion of US actions and objectives, and disdain and vituperation toward the country by both the US administration and Congress The current trip might help to explore whether the policy gap might be narrowed, and if so, how and when.

The trip this week by Kurt Campbell, Assistant Secretary of State for East Asia and Pacific Affairs and Scot Marciel, Ambassador to ASEAN, is in a sense a reconnaissance mission on narrowing the gap of hostility of two decades since the imposition of martial law in 1988. It follows the trip there of Senator Jim Webb (d. Virginia) in August. Both visits are products of serious and extensive US reviews of policy toward Burma/Myanmar. Both trips are welcome. 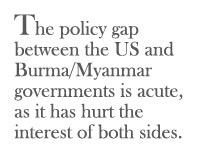 The United States isolated the Burmese junta: first, by refusing dialogue unless there was “regime change” by turning power over to the civilian opposition, whose most influential and noted participant is Nobel laureate Aung San Suu Kyi; and secondly, by invoking a series of sanctions effectively limiting US private and public economic activities, official Burmese travel to the US, financial transactions, and other relations.

Even ASEAN, which admitted Myanmar to membership in 1997 over vociferous US objections, and whose hallmark is non-interference into the internal affairs of any member, has grown increasingly frustrated by the embarrassing actions of its most notorious member, and has sought the relaxation of the taut restrictive internal measures imposed on the population. Both efforts have failed to achieve even modest alleviation of the Burmese political, economic, and social problems.

During the 2008 US presidential campaign, Barack Obama called for dialogue with states negatively viewed by the US, and following his inauguration, the government began an extensive review of its policy toward Burma/Myanmar. For the first time in many years there was public dialogue and debate on Burma policy issues within Washington. But Burma was a “boutique issue,” as one democrat phrased it, and thus only a limited amount of political capital could be expended on altering policy by any administration, even one with a mandate for change. Feelers, however, were exchanged. Nuanced signals were sent by both the Burmese and the US that bridging the gap should be explored. 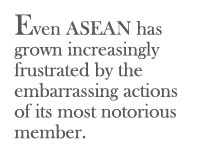 In March 2008, the Burmese foreign minister met with a mid-level US State Department official, an unprecedented modification of diplomatic protocol, and the US, through the Secretary of State, indicated that it was considering signing the ASEAN Treaty of Amity and Cooperation that since 1997 the US had largely refused to consider because of Burma’s presence. It later did sign in July 2009.

The trial of Aung San Suu Kyi in the summer of 2009 for supposedly violating the rules of her house arrest by harboring the strange American John Yettaw who swam to her compound, slowed progress, and the guilty verdict caused international outrage. Senior General Than Shwe’s decision to halve her sentence was clearly designed to mitigate foreign criticism and to keep her under wraps through the elections scheduled for sometime in 2010.

Senator Jim Webb, chair of the Asian Subcommittee of the Senate Foreign Relations Committee, traveled to Myanmar in August. He sought and achieved the release of the inscrutable John Yettaw; more importantly, he met both with General Than Shwe, head of state, and Aung San Suu Kyi, a feat which UN Secretary General Ban Ki-moon was not able to accomplish. 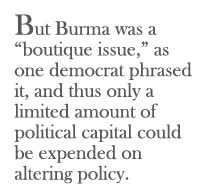 Toward the end of September 2009, Secretary Campbell met in New York with U Thaung, the Burmese Minister of Science and Technology and former ambassador to the US, and soon thereafter issued the administration’s results of the policy study. It called for continued sanctions while at the same time fostering dialogue. Proponents of a new policy were disappointed that sanctions were not unilaterally lifted, while others wanted sanctions hardened. Two factors dictated policy. First, internal US political realities prevented too sudden a policy shift because Burma is a “boutique issue,” meaning that other, more important foreign and domestic crises require expenditure of greater administration political capital. Second, a major swing in US policies must be prompted by some significant amelioration of harsh junta rule in Burma. The US president can justify a policy shift, but only in response to significant Burmese reforms. The Burmese have been so informed by many unofficial foreign visitors for years.

Secretary Campbell said that negotiations would be a gradual and slow process – the goals of US policy remain constant; the tactics have changed. The policy requires the support of significant bipartisan support in the Congress. The Burmese also need publicly to justify changes autonomously and not as a result of US pressures.

The Burmese administration may say that the 2010 elections and the inauguration of the new constitution will institutionalize reforms, even as it entrusts the military with effective control over critical national issues. It will, as General Than Shwe said, bring about “discipline-flourishing democracy.” Democracy, he said, is like a newly dug well; it doesn’t quickly yield clear water. The military feel they will be the democracy filter. Whether this will internally or externally satisfy those advocating reform are open questions. 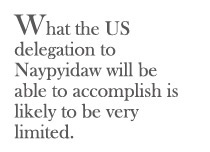 Much will depend on the administration of the elections. Their international credibility is contingent on whether the National League for Democracy (NLD) is invited or allowed to run, whether campaigning is deemed open (involving easing of the censorship laws), and on the extent of regulations on party registration. There is little doubt that opposition parties will run and win seats, but the fairness of the process will be closely watched. What credibility the elections would have if the NLD were allowed to participate but refused, is a major issue; they might refuse if Aung San Suu Kyi continues to remain under house arrest. Many on the outside will look to the release of political prisoners, including Aung San Suu Kyi, whom some will call to run, though that is highly doubtful.

What the US delegation to Naypyidaw will be able to accomplish is likely to be very limited. Observers should not look for a product; they should instead analyze the process, and then monitor those changes over time. But if changes occur, the US must be prepared to respond clearly, quickly, and forthrightly, also in stages, through modifications of its policies. The vested interests in the status quo in the US will complain, but in the interests of the Burmese people and the region, the gap should be closed. These two trips could significantly contribute to this possibility.

David I. Steinberg is Distinguished Professor of Asian Studies, School of Foreign Service, Georgetown University. His latest book is Burma/Myanmar: What Everyone Needs to Know (Oxford University Press).
Copyright © 2009 Yale Center for the Study of Globalization