Offshoring work overseas by US companies is a handy populist issue during a US presidential campaigns. The issue distinguishes the two candidates: Republican John McCain staunchly supports free trade and low taxes; Democrat Barack Obama supports free-trade agreements, but urges tax incentives for companies that keep jobs inside the US. Many US workers bitterly blame the loss of high-skilled manufacturing and increasingly IT and service jobs on US companies relocating factories and offices overseas to low-wage nations. But one study shows that mass layoffs account for only 5 percent of job loss in the US, and only 2 percent of those jobs lost since 2004 can be attributed to offshoring, reports business editor Ann All. Not understanding the reasons behind lost jobs – including high deficits, downward wage pressure and minimal innovation – only adds to the challenges of finding solutions. The election campaign may not be the best time. – YaleGlobal

Rather than blame China, India and outsourcing for the loss of jobs, US workers need to sharpen their own competitive edge
Ann All
Friday, October 17, 2008 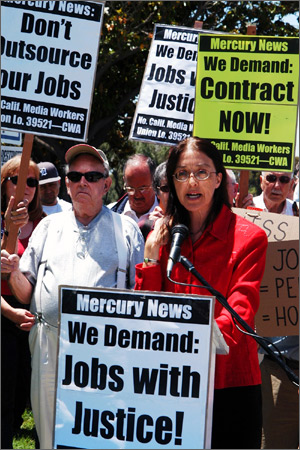 Politics of outsourcing: During a US presidential election year, outsourcing has emerged as a hot button issue

LOUISVILLE, Kentucky: Offshoring has become a well-accepted business practice in the United States, with many American companies taking advantage not only of lower-cost labor pools but also of skill sets in short supply in the United States. Yet it has remained a politically charged practice, and companies that offshore operations frequently face criticism from trade associations, commentators and, especially during election season, political candidates.

This year’s presidential election, pitting Republican John McCain vs. Democrat Barack Obama, is no exception. Obama has yet to come up with a sound bite as memorable as the one used by two-time presidential candidate Ross Perot, who warned that jobs heading south to Mexico following ratification of the North American Free Trade Agreement in 1992 would create a “giant sucking sound.”

Obama has followed the example of John Kerry, the Democrat who made offshoring-related criticism of President George W. Bush a regular part of his campaign appearances during the 20014 campaign. Kerry found receptive audiences, especially in states like Ohio and Pennsylvania, where local economies were hit hard by the loss of manufacturing jobs over the previous decade. His plan to address offshoring revolved around changing rules that allow American companies to defer paying taxes on income earned by foreign subsidiaries until they bring those profits back to the United States.

Bush’s support for such rules encouraged the export of American jobs, said Kerry. Instead of Kerry-style denunciation of unpatriotic companies offshoring their operation, Obama emphasizes positive incentives to those who don’t.

As the US economy continues to sour in the wake of the credit crisis, Obama has used an anti-offshoring message that echoes Kerry’s though on the campaign trail, his speeches are more nuanced. During his nomination speech at the Democratic National Convention, Obama said that “companies that ship jobs overseas will not get tax breaks.”

His remarks were widely aired in India, a popular destination for companies that offshore information technology positions. Not all Indians appear concerned. Som Mittal, chairman of the country’s National Association and Software Companies, said: “Democratic governments in the past were in support of free trade as the US has been all along. We don’t think that practice will go when a new administration takes over early next year. The stakeholders are well aware of the advantages of outsourcing, especially in the service industry.” 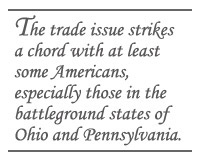 Obama in August 2007 introduced the Patriot Employer Act, which would offer tax breaks for US corporations that keep their headquarters on American shores, maintain a certain ratio of US-based employees to foreign employees and provide certain other employee benefits. Obama also said he would consider renegotiating NAFTA to include stricter environmental and labor standards. During the Democratic primary, he used opponent Hillary Clinton’s past support for NAFTA to cast her as a candidate who cared more about big business than “ordinary” Americans.

During a speech to the International Association of Machinists and Aerospace Workers at its annual convention in September, Obama referred to a strike by Boeing machinists, during which the union has asked the company to agree to future limits on outsourcing. Obama said: “I support you because what you’re fighting for is a fair shot at the American dream. It’s the idea that your government shouldn’t stand idly by while your job is shipped overseas.”

Though Obama has supported trade deals with Peru and Oman, he opposes proposed agreements with Colombia and Panama and voted against the Central American Free Trade Agreement in 2005, which extended free trade to the Dominican Republic and other Central American countries. He may have had second thoughts on CAFTA, however, writing in his 2008 book “Change We Can Believe In” that CAFTA “was probably a net plus for the US economy.”

Republican McCain, in contrast, has been a staunch supporter of free trade throughout his 22-year tenure in the Senate. In July, he visited Colombia to urge passage of the Colombia agreement. Before his trip, acknowledging that it might be difficult to sell Americans on the merits of another trade deal during the economic downturn, he said: “I have to convince them the consequences of protectionism and isolationism could be damaging to their future.”

McCain voted for CAFTA and NAFTA and for expanded trade with Oman, Singapore, Chile, China, Vietnam and the Andean nations. In 1997, he voted to renew a “fast track” system that gave then-President Bill Clinton the ability to quickly negotiate free trade deals like NAFTA. In 2002, he voted to make trade agreements exempt from Congressional amendments. He also voted to kill a bill that would have imposed trade sanctions on China if the country didn’t revalue its currency.

Like Bush before him, McCain emphasizes retraining American workers who lose their jobs due to offshoring. According to his campaign website, he’d overhaul the unemployment insurance program to do so.

The trade issue likely strikes a chord with at least some Americans, especially those in the battleground states of Ohio and Pennsylvania. In a 2005 Program on International Policy Attitudes poll, just 16 percent of respondents favored a liberal approach to trade, while 56 percent said they supported expanded trade, but only if more was done to assist US workers whose jobs are affected.

In a CBS News poll from August, 62 percent of Americans said the economic rise of countries like China and India has been “bad” for the U.S. economy, while 14 percent said it has been “good.” Addressing the question of whether free trade presents an opportunity or a threat to America’s economy, respondents to a CNN poll were neutral last October. In June, their attitude shifted to slightly pessimistic.

Yet there is little hard evidence that offshoring results in a wholesale loss of American jobs. Canadian economists Runjuan Liu and Daniel Trefler published research concluding that US jobs lost due to offshoring to China and India are offset by the growing sales of US-produced services in those countries. Wrote the two, “…we can say with confidence that even if service trade with China and India grows at its current clip, the labor-market implications will be small.”

University of Hawaii professor Raymond Panko reached a similar conclusion after studying data from the Bureau of Labor Statistics’ Mass Layoff Statistics program, which tracks layoffs of 50 or more jobs. Of the nearly 1 million jobs lost since 2004, according to Panko, only 16,197 can be attributed to offshoring. Acknowledging that it’s a small sample, as mass layoffs only account for some 5 percent of US job losses every year, Panko nonetheless suggests the data shows “no support for the idea that enormous numbers of IT jobs are being offshored.” and writes, “This does not mean that offshoring is negligible – only that it does not appear to be large compared to total employment or total IT employment.”

Though global trade is overshadowed for now by the broadening credit crisis and its impact on the world’s financial markets, there seems to be little question that it will reassert itself as an important economic issue. Among the issues the newly-elected president will need to address: concern that the US could lose its edge in high-tech innovation; downward wage pressure, caused at least partly by the growing global labor market; and huge annual trade deficits.

Ann All is associate editor of IT Business Edge.