A Path to Global Disarmament

With North Korea threatening to test a nuclear weapon and openly blast its way into the nuclear club, the world is at a dangerous crossroads. The world community must craft careful responses to the states that are determined to become nuclear powers, writes Hans Blix, chairman of the Weapons of Mass Destruction Commission. History has shown that incentives work better than threats. The international community must provide incentives for Iran and North Korea to abandon nuclear research – offering security assurances and diplomatic relations – rather than threats that only spur the two nations to pursue nuclear-weapon capability. Ongoing nuclear activity by Iran and North Korea could have a domino effect and nudge neighboring countries to pursue their own weapons, warns Blix. In the end, the most powerful way to ensure global security is revival of global-disarmament efforts: Nuclear states can lead the way, showing that they, too, are ready to give up the destructive technology. – YaleGlobal

A Path to Global Disarmament 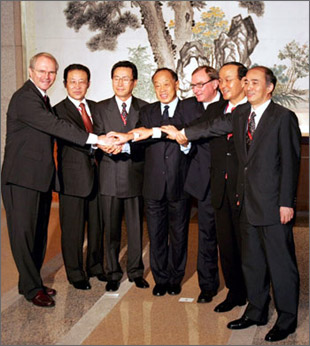 Hold it! The photo-op of the six party talks in Beijing in July 2005 has since given way to invectives

STOCKHOLM: Among the threats to world security is the possible development or the possession of weapons of mass destruction in some states “of concern,” notably Iran and North Korea (DPRK). The program for enrichment of uranium in Iran and the production of plutonium and possible enrichment of uranium in the DPRK take place in tense areas and constitute acute political problems.

In both cases, there are fears that the production of enriched uranium and plutonium may lead – and in the case of the DPRK has led – to production of nuclear weapons that may be used. The concerns are acute in the neighborhoods of these countries: South Korea and Japan; Israel and the Middle East.

Linked to these concerns are fears about possible domino effects. The aversion to nuclear weapons is deep-rooted in Japan, and it would take much to provoke Japan to move toward such weapons. If that were to happen, tensions with China would dramatically increase.

The efforts of the US and other states taking part in the six-power talks in Beijing have wisely aimed at removing the incentives of the DPRK to develop and possess nuclear weapons: A common understanding was reached in September 2005, envisaging that the whole DPRK nuclear program would be eliminated with strict verification introduced. The North and the South would confirm an agreement made in 1992 to have neither enrichment nor reprocessing plants. The government of the North was further told that it would receive economic assistance and assurance that it would not be subject to armed attacks from the outside. It was also told that normalized relations could be opened with the US and Japan.

In the course of one year, the welcome understanding has gradually vanished. Incentives have given place to invectives. The US has inflicted economic punishment on the DPRK for alleged participation in counterfeiting. The DPRK has refused to return to talks unless the punishment is lifted. DPRK has performed missile tests – and now threatens a nuclear test. A de-escalation is acutely needed on both sides – perhaps through action similar to that taken by former US President Jimmy Carter when he flew to see President Kim Il Sung in June 1994.

In the case of Iran, the risk of a domino effect seems less clear. The Arab states would worry about a nuclear non-Arab Iran. So would perhaps Turkey. Unlike Japan, however, these states have a long way to go to acquire nuclear capability.

Unlike the DPRK, Iran has declared that it only seeks a capacity to enrich uranium to supply power reactors with fuel. The IAEA and intelligence agencies around the world have examined the Iranian contention. While the IAEA has not – yet – concluded that the aim of the Iranian program is to make a weapon, others declare this conclusion with as much conviction as they showed about an Iraqi nuclear-weapon program in 2003.

A number of circumstances are invoked to show that Iran’s intention is to make weapons, including that the program was kept secret for many years in violation of Iran's obligations to the IAEA; that a research reactor under construction is an excellent producer of plutonium; and that a nuclear-weapon design was obtained from the Pakistani scientist A.Q. Khan, not only centrifuges for uranium enrichment.

Iran likely had inconsistent aims during the some 20 years before achieving the ability to enrich gram or milligram quantities of uranium to some 5 percent. Also, the Iranian government is likely more divided than united behind the enrichment program.

It is not meaningful to conjecture about Iran's "real" intentions. After all, even if purely peaceful today, these could change in the future. What is certain is that Iran – and any other country – would be a couple of years closer to a weapons option if it were to have an industrial capability for enriching uranium. Notably, the intense concern about Iran is part of a more general concern about the possibility that more countries may seek enrichment capability and thereby be years closer to a weapons option.

Some factors could persuade Iran to suspend, at least for a while, its program for enrichment:

The European states, while arguing that Iran does not need a capability to enrich uranium, wisely seek to demonstrate that they understand and endorse Iran's ambition to move into high technology – including nuclear. They declare themselves ready to assist Iran in this ambition by facilitating investments; offering advantages for trade and finance, including support for membership in World Trade Organization; and transferring nuclear technology for peaceful uses and assuring a nuclear-fuel supply, thereby acknowledging the legitimacy of an Iranian program for peaceful use of nuclear energy.

Missing in the negotiation are two elements that only the US could contribute and that were put on the table for North Korea: assurances about security, because holding out a promise about a dialogue is not enough; and assurances about official relations.

One may assume that the Iranian government is concerned about the huge US military presence in Iraq, Pakistan, Afghanistan and elsewhere in the region and remembers the US actions that toppled Iran’s democratically elected Mohammad Mossadegh in 1953. The Iranians may also conclude that the US and Israel will be reluctant – after Iraq and Lebanon – to use military force, and that on balance Iran could be safer from armed attacks and subversion if it suspended enrichment.

Such a conclusion would be more likely if security assurances were part of the package offered to Iran in return for suspension of enrichment. Yet any readiness to make such an offer is not apparent.

Further, the Iranian government may well feel that it was treated unjustly by the industrialized world, when Iran was the victim of Saddam Hussein's aggression in the 1980s, and that it has been unfairly ostracized. The US has offered to participate in discussions with Iran, provided that the country first suspends its enrichment program.

This may not look as magnanimous in Teheran as it does in Washington. In the case of North Korea, the US does not ask for any payment to sit down and talk, but instead seems ready to offer normal official relations as a part of a negotiated settlement. A similar offer might be a valuable chip for Iran.

Three other points regarding negotiations:

First, the UN Security Council and negotiating powers have demanded that Iran suspend its enrichment program prior to any talks. This may look like a technical negotiation matter, but which player in a game is willing to give up its trump card before play begins? Perhaps a time-limited suspension starting with the talks would offer a way out of this self-inflicted dilemma.

Second, what is the reason for the haste? I do not exclude the possibility that the Iranian side wants to drag its feet, seeking to increase its leverage by building another cascade of centrifuges – just as North Korea may increase world anxiety by reprocessing more plutonium.

Nevertheless, it would be several years before Iran could enrich enough material to make bombs. There’s time for talks. Waving the sanctions card might not facilitate negotiations. It is by no means axiomatic that carrots must be coupled with the waving of sticks. The latter may simply provoke a national wish in Iran to stand tall.

Those who say that one should not lose time should remember that, with the DPRK, the world does not seem so impatient. Yet, in that case, the world is dealing with a country that may already have nuclear bombs.

Finally, there is a crying need for a revival of global-disarmament efforts, with further development of and respect for the United Nations. There might be a better chance to dissuade others – including North Korea and Iran – from developing nuclear weapons, if the nuclear states began, themselves, to move away from these weapons and, thereby, strengthen world security.

Hans Blix, former director general of the International Atomic Energy Agency, is chairman of the Weapons of Mass Destruction Commission based in Stockholm.