Population: Some Boom, Some Decline

World population nearly quadrupled during the 20th century, and in early March, US National Intelligence Director Dennis Blair told the Senate Armed Services Committee Tuesday that by 2025 it could grow by another 1 billion people. That would put pressure on the global environment as well as on food, water and energy supplies, setting up the potential for conflicts over resources. While population has grown at a fast clip in some developing countries, in the developed world it’s been in decline. Varying fertility rates among regions can also contribute to poverty, destabilization and turmoil, explains demographer Joseph Chamie. Uncertainty shrouds projections beyond a few years out, yet Chamie points to some clear trends: Some demographers expect that increases in education, employment for women, contraception development and urbanization could lower fertility rates to replacement levels, thus stabilizing population. But small fractional differences in fertility rates can affect population totals by the billions, leading to economic and social havoc, and Chamie urges policymakers to pay close attention to a central challenge for this century. – YaleGlobal

Population: Some Boom, Some Decline 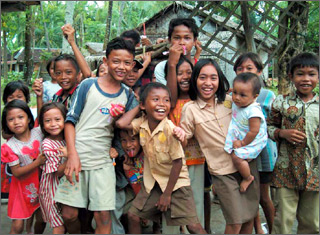 Growing pains: In countries like Indonesia, population is growing fast, while in Japan and Europe it's in decline

NEW YORK: The dangers of population explosion hit newspaper headlines as the US intelligence chief warns about it. Indeed the world population could reach 7 billion in just two years and 8 billion perhaps in next two decades. But that’s not the only story. Dramatic declines in fertility rates in some countries and high rates in others pose a critical challenge. Without restoring some balance, the world could be headed towards instability and turmoil.

One must be reminded that the growth of world population – which now stands at an estimated 6.8 billion human inhabitants – has greatly impacted all life forms and the entire natural environment on the planet. 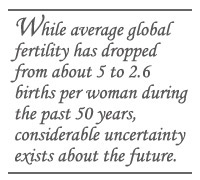 Although the population of the world continues to grow substantially, 79 million per year, the rate of growth has declined by nearly half over the last 40 years – from 2.0 to 1.2 percent per annum. The cause for the slowdown is declining fertility rates.

However, while average global fertility has dropped from about 5 to 2.6 births per woman during the past 50 years, considerable uncertainty exists about the future. Insofar as fertility is the engine driving the future size of world population, this uncertainty about the path of fertility in the coming years is one of the central and challenging questions of this century.

Prior to the 20th century, world population grew slowly because while fertility rates were high so were mortality rates. For example, between years 0 and 1500, world population is estimated to have grown from around 300 million to 500 million. The 1 billion population mark was reached at the start of the 19th century (see Table 1). 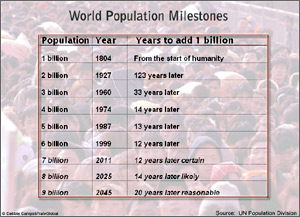 In striking contrast to the past, the 20th century ushered in the world’s most rapid rates of population growth because while mortality rates fell to relatively low levels, fertility rates generally remained comparatively high. World population nearly quadrupled during the past century, with 80 percent of the growth occurring during its second half. The 2 billion mark was reached in 1927, 3 billion in 1960, 4 billion in 1974, 5 billion in 1987, 6 billion in 1999.

Behind these global population figures are enormous differences among regions and countries. For example, of the 79 million people added to the world every year, six of the most populous countries – India, China, Nigeria, Pakistan, Indonesia and Bangladesh – account for approximately half of this growth. India alone accounts for 21 percent of global population growth, followed by China, which contributes 11 percent. As a consequence, India’s population is expected to exceed China’s in about 20 years.

In contrast, among the more developed regions, little demographic growth is taking place. Many European countries and Japan are entering a period of population decline, and these trends are likely to continue. In contrast, Australia, Canada, New Zealand and the US are projected to continue growing due to relatively higher fertility and international migration.

In terms of annual rates of growth, the world’s most rapidly growing region is Africa due to the large gap between high birth rates and comparatively low death rates. During the last half century, Africa’s population more than tripled, increasing from 227 million to 819 million. High fertility and vigorous demographic growth are expected to continue, with the African continent projected to be 2 billion inhabitants by mid-century. The populations of Asia and Latin America are also expected to increase by about 25 percent over the next 50 years.

While the future population growth remains uncertain, some trends are clear: First, most current rates of population growth are unsustainable over the long term. For example, if fertility rates were to remain fixed at today’s levels, then world population would exceed 11 billion by mid-century. Furthermore, while some countries, such as Germany, Italy, Japan and Russia, would decline to a small fraction of their current population size, others such as Ethiopia, Nigeria, Pakistan, Saudi Arabia and Yemen would increase many times their current size.

In the near term, there’s little doubt that the world’s population will reach 7 billion, probably by 2011. Will the world reach 8 billion? Most demographic observers would say that it’s highly likely, perhaps by 2025. After that, things become considerably less certain.

Some demographers expect that world fertility will remain above replacement for some time to come, pointing out that nearly all of Sub-Saharan Africa and most of South and West Asia have high fertility levels. Others, however, see below-replacement fertility becoming the global norm in coming decades. Average world fertility, they note, is about half the level it was in the 1950s, with fertility declines near replacement in such diverse cultures as Algeria, Iran and Vietnam. Lower mortality, urbanization, increased education, especially girls, the growing employment of women, later ages at marriage and the greater availability of modern methods of contraception are strong, universal forces that point toward low levels of fertility. Also, they draw attention to the fact that today approximately 45 percent of the world’s population resides in countries with below-replacement fertility versus less than 1 percent of world in the 1950s. 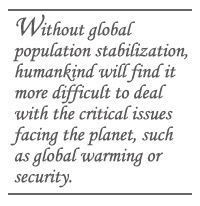 Over time, relatively small differences in fertility rates can lead to enormous differences in population size. For instance, if fertility rates eventually settled at about one-quarter child above replacement, i.e., 2.35 births per woman, world population would more than double to 14 billion by the century’s end and continue growing thereafter. On the other hand, if fertility rates settle at about one-quarter child below replacement fertility, or 1.85 births per woman, world population would be around 5.5 billion by the end of the century and continue declining thereafter. In other words, replacement fertility in the long term is essentially the tipping point for population change: above it growth and below it decline.

As noted earlier, this uncertainty about the path of fertility is a central and challenging question of this century given its impact on the future size of world population. Many demographers making long-range population projections see fertility levels eventually fluctuating around the replacement level. To do otherwise, as noted above, would lead in the long term to either extremely large, expanding populations or very small, shrinking populations. Assuming fertility rates gravitate to replacement during the coming decades and subsequently fluctuate closely around it, world population could in due course stabilize at around 9 to 10 billion.

Stabilization of world population is perhaps the paramount issue of the 21st century. Without global population stabilization, humankind will find it enormously more difficult to deal with the critical issues facing the planet, such as global warming, biodiversity, the environment, energy, food/water supplies, migration and security. The path to population stabilization requires sustained and critical attention and informed policymaking at all levels. Today’s decisions not only affect human well-being, but also the quality of all life forms on Earth in the coming decades and beyond.

Joseph Chamie, former director of the United Nations Population Division, is research director at the Center for Migration Studies.