US citizens have suddenly discovered the global intricacies of port operations throughout the country. While the outrage over the Dubai Ports World investment questioned safety, federal agencies such as US Customs and the US Coast Guard continue to control port security. Since the 1970s, US flag-shipping lines have faced increasing competition from foreign companies, which operate with low-cost crews and less stringent regulatory and tax policies. Firms from Singapore, Denmark and other countries gradually purchased US port-related firms. Profits in the shipping industry were historically low, and US firms lost interest in the business. The DP World controversy has sparked debate in the US Congress over legislation that would prevent foreign companies from “managing critical infrastructure” in the US. Foreign firms have a strong track record of leasing and managing US terminals, and industry veterans doubt that the present furor would have much of an impact on that situation. – YaleGlobal 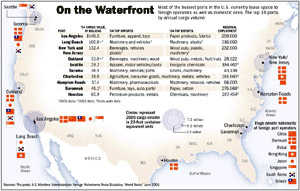 Map of the busiest ports in the U.S. and which countries lease space there. Enlarged image

Amid the political firestorm surrounding Dubai Ports World, one fact is often lost -- foreign companies already manage most of the terminals at American ports, the result of a longtime dominance of global shipping lines that often run the facilities that handle their cargoes.

Today, more than 60% of the container terminals at the nation's 10 busiest ports are at least partly managed by foreign operators, and in some cases, companies controlled by foreign governments. That figure rises to 80% at the biggest ports -- Los Angeles, Long Beach and Oakland in California and New York/New Jersey, which together handle half of all containers that pass through U.S. ports.

"I don't think Americans have any realization of the global nature of the maritime industry," says Peter Shaef, managing director of New York-based AMA Capital Partners LLC, a merchant bank focusing on the transportation industry.

Large ports often have multiple terminals operated by multiple companies. In Los Angeles, for instance, there are terminals managed by companies from China, Taiwan, Japan, Singapore and Denmark. Of the eight terminals in Oakland, four are managed by foreign companies, two by U.S.-foreign joint operations and just two are purely American.

The management of U.S. ports has come under close scrutiny amid an outcry over plans by DP World, which is owned by the government of Dubai, to buy Peninsular & Oriental Steam Navigation Co. of London. The purchase gives DP World control over terminal operations at ports in New York/New Jersey, Philadelphia, Baltimore, Miami and New Orleans. In addition to the P&O terminals, these ports have other terminals, run by different operators, many of which are foreign.

Most U.S. ports are owned by port authorities set up by local, regional or state governments. The port authorities act as landlords for swaths of waterside land where ships dock to pick up and drop off thousands of tractor-trailer sized boxes -- containers -- packed with items ranging from cellphones to lawn furniture to auto parts. Each terminal is leased to an individual operator that is responsible for moving the containers from the ships to storage areas for pickup. (Ports also handle shipments of oil, grain and other material, but these operations are generally run by Americans and aren't at issue in the current debate.)

[Icon] ON THE WATERFRONT

See a map of the busiest ports in the U.S. and information on which countries lease space there.

Even though opponents of the DP World deal have focused on national security issues, security -- such as the inspection of containers -- is conducted by federal enforcement agencies including the U.S. Coast Guard and the U.S. Customs and Border Protection no matter who operates the terminal.

In several places, the port authority itself manages the terminal operations. The port of Savannah, Ga., has one large container terminal and no foreign involvement. In other instances, independent companies, such as DP World and Seattle-based SSA Marine Inc., the largest U.S. terminal operating company, compete for contracts to run terminal operations.

The DP World controversy echoes a mid-1990s furor involving one of those Chinese companies, China Ocean Shipping Co. It had used the port of Long Beach since 1981 and wanted to lease its own facility on land once occupied by the Long Beach Naval Station. Concerned about national security, Congress scuttled the deal. But later, when other land opened up, Cosco took over another terminal in the same port.

Goods shipped domestically -- between the West Coast and Hawaii or Alaska -- must travel on U.S. ships, and terminals that serve these ships are often run by Americans. Still, most ships serving U.S. ports come from points abroad, and today, none of the major global container-shipping companies are American.

It wasn't always that way. Container shipping was launched as a world-wide business in the 1950s by Malcom McLean, a former North Carolina trucker who first loaded freight trailers on a converted tanker in 1956 in northern New Jersey and sailed the tanker to Houston. Mr. McLean's company, Sea-Land, subsequently built a network of container terminals in the U.S. and overseas and was sold to R.J. Reynolds in 1969.

In the 1970s and 1980s, U.S. flag shipping lines, carrying high labor costs and tax and regulatory burdens, faced increasingly tough competition from foreign companies, which employed low-cost Asian crews and operated under flags of convenience from countries with more relaxed regulatory and tax policies. Over time, several American companies were bought by foreign owners. In 1997, APL was bought by Singapore's NOL. In 1999, CSX Corp. sold Sea-Land to AP Moller-Maersk, the Copenhagen-based operator of the largest container-shipping network in the world.

The American divestment was driven partly by economics in an industry where margins are historically low. "It's not a particularly profitable business," said Neil Davidson, research director for Drewry Shipping Consultants Ltd. in London. "There are a hundred other things [where] American investors can put their money to better use and more profitable use."

At the same time, the foreign ship lines were securing leases to operate container terminals in the U.S. and buying terminal-operating companies. West Coast port authorities in particular were eager to lock in the foreign ship lines by leasing them terminals so that the ship lines had a reason to stay and were less able to play one port against another to try to get the best deal.

Even the largest American player in the market isn't expecting the DP World controversy to have much of an impact on U.S. port operations. "We would be surprised if there were impacts to foreign commercial entities leasing terminals in the U.S. because of their successful track record," says Bob Watters, a vice president of SSA Marine.