After weeks of protests, the Bolivia’s military chief convinced President Evo Morales to resign Morales had been president since 2006, and as many as 20 other officials resigned as well. “Crowds of jubilant foes of the socialist leader celebrated in the streets with honking horns and fireworks after Morales's announcement Sunday, treating as a triumph of democracy the ouster of a man who pushed aside presidential term limits and claimed victory in a widely questioned October election,” reports the Associated Press. “But others — including Morales himself — saw it as a return to the bleak era of coups d'etat overseen by Latin American militaries that long dominated the region.” Morales had already agreed to new election. But the date for a new election and succession for the transition period is unclear. – YaleGlobal

Read the article from the Associated Press about the resignation of Bolivia’s President Evo Morles. 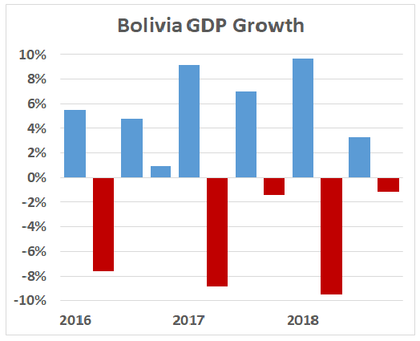 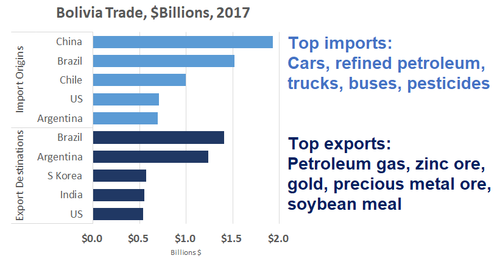 Stability: Bolivia is a commodities-based economy (Observatory for Economic Complexity)

During the 2004-2014 decade, the Bolivian economy grew at an average annual rate of 4.9 percent due to the high commodities prices, the expansion of natural gas exports and a prudent macroeconomic policy. Consequently, moderate poverty was reduced from 59 percent to 39 percent and the Gini coefficient of inequality fell from 0.60 to 0.47.

“Due to a less favorable international context and a reduction in the gas exports, GDP growth declined from a peak of 6.8 percent in 2013 to an estimated 4.2 percent in 2018. The poverty and inequality have continued reducing, although to a slower pace…. The effect of low commodity prices has been cushioned by expansionary policies that resulted in high fiscal and current account deficits in a fixed exchange rate context….

“Between 2014 and 2019, the gross public debt, including the financial public sector debt, increased from 38 percent to about 53 percent of GDP, and fiscal savings in the Central Bank fell from 24 to around 13 percent of GDP.”

End of the Road for the Non-Aligned Movement?