From the historic Spanish Flu to the recent SARS outbreak, communicable diseases have periodically challenged the world community. SARS was caused by a new strain of coronvirus that was identified and stopped. But the latest threat comes from avian influenza virus of the type that could mutate and pass on to humans. Due to their genetic instability and swift multiplication, influenza viruses are extremely adaptable and difficult to prevent. Dr. David L. Heymann, former executive director of communicable diseases at the World Health Organization, discusses the newest threat: the avian influenza, now affecting chickens and some humans in South China and Southeast Asia. An absence of substantial and coordinated prevention efforts could give rise to the first influenza pandemic of the 21st century. And given the increased speed of global human movement, flu outbreaks could become more disastrous than the 1918 pandemic - an outbreak responsible for as many as 40 million deaths. – YaleGlobal

Urgent and coordinated action is needed to head off mutation of avian influenza into a new Spanish Flu
David Heymann
Wednesday, January 26, 2005 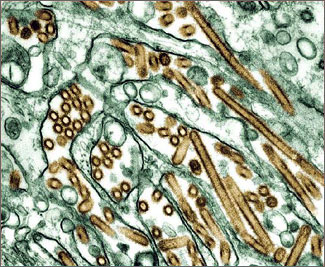 GENEVA: When the outbreak of severe acute respiratory syndrome (SARS) was first identified in 2003, many initially feared the onset of the first influenza pandemic of the 21st century. It turned out to be not an influenza virus, but a newly identified and unrelated coronavirus that caused similar symptoms. But that respite may be short lived, as the world now faces a true influenza alert - one that must be taken seriously. Avian influenza, presently epidemic in chickens in several Asian countries, has infected other animals and humans, thus increasing the risk of an influenza pandemic. A recent discovery - that a variety of avian influenza played a role in the deadly Spanish Flu of 1918 - comes a grim reminder of the potential danger.

Each year, influenza epidemics cause sickness in millions of infected humans, and an estimated 500,000 to 1 million deaths worldwide. In addition to causing human sickness, certain strains of influenza are genetically unstable, bearing the capacity to mutate as they reproduce. In fact, during each influenza season, viruses gradually mutate; these mutated viruses multiply, ultimately overtaking the parent virus to become the new parent during the next influenza season. This process is known as antigenic drift.

Immunity to a parent virus does not completely protect against sickness caused by its mutated progeny, though it may decrease the severity of infection and illness. Thus, each year when the influenza epidemic season begins, humans are again susceptible and must receive updated vaccines.

Antigenic drift of influenza viruses requires constant monitoring so that vaccines can be updated each year. Over 120 laboratories around the world, in collaboration with the World Health Organization (WHO) Global Influenza Program, conduct this monitoring.

The past century gave rise to three influenza pandemics, each of was caused by a new viral subtype. The most serious, before antibiotics and vaccines existed, was the Spanish Flu pandemic of 1918 and 1919. Researchers at the US Armed Forces Institute of Pathology recently studied preserved specimens from people who had died of Spanish influenza. Their results suggest that the trigger virus for this pandemic was originally an avian influenza virus. Over a period of time, it circulated among birds and possibly some mammals. Through a process known as adaptive mutation, the virus gradually assumed a form that could infect - and be easily transmitted among - humans.

With no immunity to the Spanish influenza virus, persons of all ages were unprotected, and the severe respiratory disease resulted in high death rates. It is estimated that between 20 million and 40 million humans died during the pandemic.

All viruses, including influenza, must invade living cells in order to reproduce. If both a human influenza virus and an avian influenza virus enter the same cell, they may randomly trade genetic material. Resulting from this exchange, known as reassortment, are new viruses that bear resemblance to both the human and avian parents. Since humans have not previously developed immunity to this new subtype of the influenza virus, pandemics spare nobody. The other two influenza pandemics of the 20th century, in 1957 and 1968, are thought to have been caused by reassortment. These pandemics were less severe than the 1918 pandemic, and together caused an estimated 4.5 million deaths.

The precise timing of influenza pandemics is unpredictable, yet most scientists believe that future outbreaks are inevitable. Risk factors for adaptive mutation and reassortment are thought to be highest in areas like South China and Southeast Asia, where there are large populations of aquatic birds (the hosts to many different subtypes of avian influenza viruses) and where humans live in close proximity to animals that may be infected by these aquatic birds. Influenza viruses are widespread in mammals, including humans, and birds, but are only rarely transmitted between the two groups. In ducks and other aquatic birds, the viruses cause a harmless, symptom-free infection; however, if transmitted to domestic birds, such as chickens, the infection can cause lethal outbreaks.

In May 1997, an avian influenza virus infected a 13-year-old boy in Hong Kong, who then developed a fatal form of influenza. The virus appears to have directly crossed the species barrier from infected chickens to humans, and no convincing evidence of adaptive mutation or reassortment was found. The child lived in an area with live poultry markets in close proximity to residential areas, and at the time, a highly fatal outbreak of avian influenza plagued chickens in the Hong Kong markets. An additional 17 human cases soon followed, and 33 percent of those infected died. The prompt culling of all live chickens in Hong Kong eliminated the source before the virus could develop efficient person-to-person transmission.

By late 2003 and throughout 2004, a more lethal form of the same virus caused unprecedented epidemics of influenza in chickens in nine Asian countries. The epidemics have begun again this year, and since January 28, 2004, a total of 52 humans are known to have been infected, 39 (75 percent) of whom have died. It is thought that the majority of these humans were infected by sick chickens as the virus repeatedly crossed the species barrier, and the virus does not appear to have attained the genetic factors needed for efficient human-to-human transmission.

At the same time, pharmaceutical companies in North America and Europe are developing a human influenza vaccine that contains the elements of the avian influenza vaccine - for use should a pandemic not be averted. These companies are also exploring means of scaling up vaccine production. Antiviral drugs that decrease the severity of disease in potentially infected persons, and several countries are stockpiling in the event of need.

Though the SARS outbreak did not prove to be the first influenza pandemic of the 21st century, influenza viruses continue to demonstrate their instability. The world is again on notice. Given today's jet travel in a globalized world, any decrease in vigilance and preparedness could result in more rapid spread than in the days when the Spanish Influenza spread throughout the world by slow boat and train.

1 Normally, influenza viruses in birds and mammals do not breach the species barrier to infect humans.

David Heymann, MD, is the former executive director of communicable diseases at the World Health Organization, where he now heads the polio eradication initiative.