Under US President George W. Bush's newly proposed plan, only a handful of countries would be allowed to develop nuclear fuel. These countries could, in turn, sell fuel only to states that renounce enrichment and reprocessing. Joseph Cirincione, Director of the Non-Proliferation Project at the Carnegie Endowment for International Peace, believes that although the proposal does represent an admirable effort to prevent the spread of nuclear weapons technologies, it is "doomed to failure." As long as the US insists on leading an exclusive club of nuclear powers, he says, there will be other states who try to circumvent the rules. Rather than attempt to maintain its nuclear hegemony, the US could propose bringing all nuclear fuel production facilities under international stewardship. In addition, the White House could signal its commitment to non-proliferation by halting the Pentagon's development of 'mini-nukes' and by purchasing more of the former USSR's nuclear weapons stockpile. Ultimately, Cirincione argues, controlling the spread of nuclear weapons will require sincere political will and the financial resources necessary to transform talk into action. – YaleGlobal

Will his unilateral approach and the budget shortfall make it all bark and no bite?
Joseph Cirincione
Friday, February 13, 2004 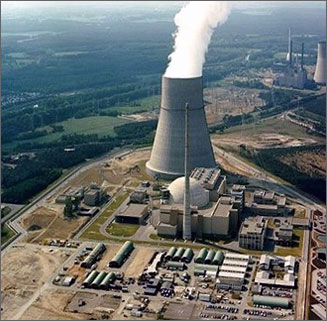 Bushehr nuclear reactor in Iran: The Bush administration wants to stop Iran and other nations from making fuel for such reactors.

WASHINGTON: Like an investor watching his returns plummet, President Bush is rebalancing his proliferation portfolio. The huge cost of the Iraq war and his sinking poll ratings seem to have convinced the president that he has invested too heavily in military operations and unilateral initiatives and that it is time to move some political capital to international organizations and cooperative ventures.

President Bush's February 11 speech was a step in the right direction. The measures he announced would, overall, help forge a stronger, more effective, and more international non-proliferation policy. Many of the initiatives, if implemented, would increase the ability of the United States and the international community to stem the spread of nuclear weapons. It remains to be seen, however, if the President will put his money where his mouth is.

The key initiatives announced by the President include:

• Expanding the Nunn-Lugar programs (initiated with broad bi-partisan support in 1991) that finance the elimination of nuclear, chemical and biological weapons in the former Soviet Union

But will the President’s policy pronouncements translate into government action? The record on that score, and the budget projections, are not encouraging. The administration’s budget for the coming fiscal year actually cuts funding for Nunn-Lugar programs by ten percent. Nor is there any increase in the US contribution to the IAEA.

This is not surprising. The administration is still dominated by officials who have long hated the non-proliferation regime that their Republican and Democratic predecessors struggled over fifty years to create. Several key officials, such as Undersecretary of State John Bolton, reject the entire concept of non-proliferation treaties and most of the multilateral system, including the United Nations. In the wake of the September 11 attacks these officials successfully revived and implemented several previously proposed but controversial policies.

All previous presidents, including George H.W. Bush, had treated the weapons themselves as the problem. This administration shifted the focus from eliminating weapons to eliminating regimes. Whereas then-President Clinton warned of threats “posed by the proliferation of nuclear, biological, and chemical weapons and the means of delivering such weapons,” President Bush framed the issue this way in 2003: “The gravest dangers facing America and the world is outlaw regimes that seek and possess nuclear, chemical, and biological weapons” (italics added). In effect, the administration moved from “what” to “who” the threat is. The country possessing the weapons was a more serious threat than the weapons themselves. This change in strategic vision led directly to the Iraq War. 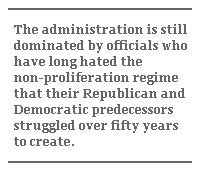 The FY 2002 budget gave counter-proliferation, mostly in the form of missile defense, approximately $8.5 billion, compared to about $1.5 billion for non-proliferation efforts and $13 billion for homeland security programs.

In FY 2004, however, the war in Iraq and $10 billion for missile defense boosted counter-proliferation budgets to $81 billion and homeland security grew to $41 billion, while non-proliferation increased modestly to $2 billion. These figures underscore the dramatic imbalance in the attention, emphasis, and roles assigned to the three pillars.

The President has now made a verbal corrective, but, as noted, has yet to match his words with dollars. Moreover, the imperious way the new policies are announced will certainly feed into the belief in many nations that the United States seeks to lead by fiat, not example.

The president is absolutely right that we must find a way to stop countries from building factories that can produce nuclear fuel one day and nuclear bombs the next. But it will be difficult for the United States to persuade others to go along with new restrictions on nuclear fuel technology that appear to establish a new double standard. In addition to the existing standard where some nations are allowed to have nuclear weapons and some not, now the president proposes that some nations are allowed to manufacture the fuel for nuclear reactors and some are not. The president would freeze the current situation in place: allowing those with existing full-scale plants to continue to make nuclear fuel, those without such plants would be barred forever from building them. The ban would be enforced by agreement of those nations in the Nuclear Suppliers Group not to sell the necessary technology to non-compliant states.

This approach is doomed to failure. The only way this will work is if it applied universally, so that, for example, no nation has independent national nuclear fuel facilities. All existing plants could be put under international control, as the director of the IAEA has suggested, or international consortia could be created to sell the fuel to all customers at prices cheaper than any nation could produce on their own. 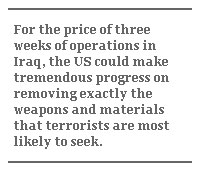 The United States could also signal its willingness to give up its own nuclear ambitions, such as the program now underway to develop new nuclear weapons for battlefield use. As long as other countries think the United States is just trying to preserve its nuclear hegemony, some nations will rise to challenge that arrangement. We all have to be moving away from nuclear weapons. It cannot be just a US diktat that everyone else goes in one direction while we go in another.

The good news is that this could all be done cheaply. We are awash in bomb material – the plutonium and highly-enriched uranium left over from the Cold War nuclear weapons binge. We are not producing any more of this fissile material now and have no need to in the future. We could work towards a global agreement to end the production of these materials as part of a new, global, nuclear deal. The Nunn-Lugar programs to secure and eliminate nuclear stockpiles are cheap compared to other defense programs. The United States now provides $1 billion a year to these efforts, but many proliferation experts believe the United States should triple that spending. For the price of three weeks of operations in Iraq, we could make tremendous progress on removing exactly the weapons and materials lying in often poorly-guarded facilities that terrorists are most likely to seek.

If President Bush backs up his speech with just a fraction of the funds spent on other defense programs we would make some real progress. But if he matches the demands he makes of other nations with new commitments to cut US weapons stockpiles and stores of bomb material, he could have a program that many would beat a path to his door to buy.

Joseph Cirincione is Director of the Non-Proliferation Project at the Carnegie Endowment for International Peace.