The US House of Representatives approved two articles of impeachment against President Donald Trump after compiling evidence about blocked military aid for Ukraine. The White House ordered staff not to testify, and most complied. The two articles of impeachment “should overrule any ethical or legal objection these witnesses now have to testifying before the Senate,” argues Harold Hongju Koh, professor of international law, adding that such testimony fulfills their oath to support the Constitution. Expressing concern about precedent and constitutional crisis, Koh urges Congress to respond in four ways: The House should subpoena former National Security Advisor John Bolton, and House Speaker Nancy Pelosi should continue insisting on a fair trial. Congress should arrest and jail witnesses who do not respond to subpoenas, as allowed by the Constitution. Likewise, witnesses who have rejected court orders should be detained until they comply with subpoenas. “Finally, if all else fails, once House managers are appointed, they should seek an order from the presiding judge, Chief Justice John Roberts, directing these witnesses to testify,” Koh concludes. “If they defy his order, he is entitled to rule that their defiance at Mr. Trump’s direction constitutes evidence that the testimony they are withholding would have supported the impeachment charges, abuse of power and obstruction of justice.” – YaleGlobal

The US has three co-equal branches of government: Contempt for congressional subpoenas by executive branch staff should be met with legal and political fusillade
Harold Hongju Koh
Tuesday, January 7, 2020

Read the opinion essay from the New York Times urging witnesses from the executive branch to testify in the US impeachment proceedings.

Harold Hongju Koh, a professor of international law and a former dean at Yale Law School, served as legal adviser to the State Department from 2009 to 2013. 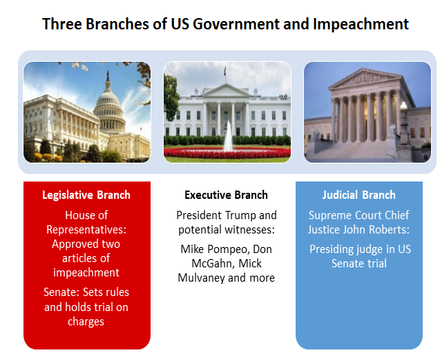 Also, read an essay from the Atlantic analyzing John Roberts’s role in the Senate impeachment trial.