Instituted some 30 years ago, the international Multi-Fiber Agreement (MFA) set export quotas on all textile manufacturing nations. Some poorer countries, like Bangladesh and Cambodia, received larger quotas, which enabled them to attract foreign investment and sharply boost their earnings. Artificially protected from competition, they built their developing economies around the textiles industry. Between 1995 and 2003, for instance, Cambodia's apparel exports surged from US$28 million to US$1.5 billion. In a two-part series, we examine Bangladesh and Cambodia's options when, at the stroke of midnight on January 1, 2005, those quotas will be eliminated. In the second article of the series, journalist Tom Fawthrop reports that the WTO's newest member, Cambodia, is about to learn some hard lessons about free trade: It opens the door to exports, but also to tough competition. In order to stay afloat amidst larger competitors, the country must adopt a multi-faceted strategy that emphasizes its strengths – particularly its ethical labor practices. For this small country to reap the benefits of globalization, Fawthrop writes, it "must be well equipped to navigate through uncharted and possibly turbulent waters." Unfortunately for Cambodia, the global market bears no guarantees. – YaleGlobal

The end of textile export quotas cushion may confront Cambodia with the hard realities of the global marketplace
Tom Fawthrop
Friday, October 1, 2004 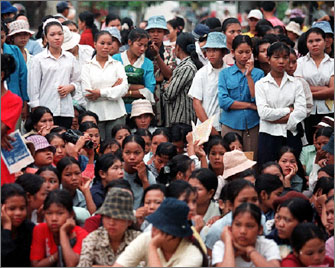 PHNOM PENH: Ten years ago, Cambodia, recovering from the legacy of the Khmer Rouge genocide, received a shot in the arm from Washington's lowered tariffs on Cambodian textile exports. Cambodia also benefited from a generous quota granted under the multifiber trade agreement. But with the end of the quota system looming in early 2005, Cambodia faces a world of tough competition for which it is unprepared. The country is about to learn the hard way that governments must be ever vigilant and nimble-footed to navigate with the shifting winds of globalization.

Only months ago, the Hun Sen government, encouraged by international donors, opted to fully embrace globalization by joining the WTO. The government believes it is the only path for breaking out of chronic poverty and underdevelopment. Free trade, however, comes with its price.

Cambodia's weak economy rests on three main pillars: agriculture, textile exports, and tourism. In recent years, foreign investment has been concentrated in the flourishing garment sector, which employs 240,000 workers and provides family income for up to a million people. Most factory owners hail from the Chinese mainland, Hong Kong, Singapore, and Taiwan. Attracted by the export quota and cheap labor, they, along with a few Korean and European investors, flocked to Cambodia.

In 2003, the clothing industry accounted for more than 90 percent of Cambodian export earnings, mostly in US and European markets. Shipment value soared from US$28 million in 1995, when Cambodia was struggling to rebuild its civil-war-ravaged economy, to US$1.5 billion in 2003. A 1996 bilateral trade agreement with the United States in effect drastically reduced average US tariff rates for Cambodian garments and increased US imports from US$1 million in 1996 to US$1.1 billion in 2003.

The price for these generous trade benefits was Cambodia's commitment to improving labor conditions. In 2001, the International Labor Organization (ILO) began to inspect factory working conditions, in cooperation with the Garment Manufacturer's Association of Cambodia (GMAC), and jointly financed by the US and Cambodian governments.

Labor inspections, never popular with business owners, now weigh on Cambodia as it prepares for life without quotas. After Cambodian admittance to the WTO at the 2003 Cancun summit, a major debate erupted over the post-quota future of the nation's garment sector. Will a minnow like Cambodia be able to swim in the same pool as the northern giant, China?

Many clothing manufacturers, having thrived on the quota system, now dread New Year's Day 2005. Then, they will begin no-holds-barred competition with China for their most important market, the United States. The old system of US textile import quotas had capped China's market share and effectively assured manufacturers in smaller nations some American orders.

Trade officials predict that of the 50 nations exporting clothing to the United States, perhaps only 10 can survive unfettered competition from China, with its almost limitless supply of cheap labor and its capacity for high-volume production. Cambodia, they say, might not be one of them. At factories clustered in a new industrial zone in Phnom Penh, manufacturers acknowledge their inability to beat China's prices.

Production costs in Cambodia, though much lower than those in North America, are about 25 percent higher than China's. Manufacturers cite a host of reasons. For instance, electricity costs are three times those in neighboring Thailand or Vietnam. The companies also suggest that good labor practices – overtime pay, bathroom breaks, and union representation – further boost costs.

Asian growth is expected to level off as higher oil prices bite; only 1.9 percent growth is predicted for Cambodia next year. When the garment quotas are eliminated, the country's medium-term prospect, according to IMF projections, is grim.

The industry downturn could also hurt the most vulnerable section of Cambodian society. Once benefiting from garment-sector employment opportunities, most workers are young women with few alternative prospects after textile factories leave Cambodia. With scant education and families desperate for financial support, they will likely fall prey to recruiters for bars and prostitution in Phnom Penh, or sweatshops and brothels in other countries. 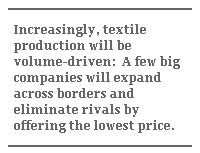 What, then, can Cambodia do? It must adopt an agile, multi-faceted strategy in order to salvage any future benefits from globalization. One certainty is the need for a reform package to make Cambodia more cost-efficient and attractive to foreign investors. In a recent study, the World Bank identified Cambodia as one of the most corrupt and inefficient countries in Asia; labor productivity is 62 percent below industry levels in China, and even 10 percent below those in Bangladesh.

Even if such reforms are zealously implemented, Cambodia must contend with the volatility of the market. Analysts say the end of garment quotas will favor manufacturing consolidation and economies of scale, as prices for non-quota garments have fallen continuously since 2000. Increasingly, textile production will become a volume-driven business: A few big companies will expand across borders, eliminating rivals by offering the lowest price.

Cambodia must pin its hopes, not on direct competition with China and India, but on touting its ethical label to the discriminating consumer. Cambodian garments are sold to the West with the certified seal of ILO approval, which entails recognition of trade unions, overtime payment, and acceptable working conditions. The country must promote its garment industry as a role model for ensuring compliance with international labor standards and preventing the exploitation of child labor.

Unfortunately, trade is driven by cut-throat competition – not ethical standards. Van Sou Ieng told The Cambodia Daily, "Buyers still insist on cheaper prices, regardless of Cambodia's high labor standards. In countries that don't care about child labor, environmental protection, or social justice, of course, their prices will be cheaper. We believe the trend must change. If not, it will be a sad story for some factories."

Organizations like the ILO and Oxfam, touting the primacy of "fair trade" over free trade, have attempted to redress imbalances that limit poorer nations. US government support of Cambodia's good labor practices may also provide short-term help if Washington adopts the so-called "product specific" safeguard against Chinese imports, available until 2013, or the "special textiles" safeguard, which expires in 2008. According to the Cambodian minister for trade, "In a time of harsh and fierce global competition, the survival of our country depends on our ability to capture the right opportunities and at the right time." But even staunch advocates of free-trade globalization concede that in order for small countries to reap the benefits, they must be well equipped to navigate uncharted and possibly turbulent waters; otherwise, the costs may outweigh the benefits. Without a major swing toward more equitable trade, the prospects look gloomy. Strong doubts remain about whether Cambodia, with its weak economic base and donor-dependent government, has either the preparation or the capacity to meet the challenge.

1 The attribution to "The Cambodia Daily" was inadvertently omitted. We regret the error.

Tom Fawthrop is a freelance journalist based in Phnom Penh and Bangkok.