Prisoner’s Release Does Not Herald a Xinjiang Spring

The recent release of a Uyghur businesswoman from a Chinese prison may have appeased the visiting US Secretary of State, but the gesture also underscored the continual frictions between China and its Uyghur ethnic minority. Beijing's official stance is that Muslim Uyghurs separatists pose a terrorist threat, but as Dru C. Gladney suggests, this may actually be a case of so-called "scapegoat terrorism." Violence is more the exception than the rule for the separatist movement. But thanks to Chinese repression, international campaigns for Uyghur rights and possible independence have become increasingly vocal and well organized, especially on the internet. The experience of other Islamic communities in China and elsewhere shows that the core issue is not religious dogma as much as the government's approach. In this context, China's recent anti-secession law allowing China to use "non-peaceful means" against Taiwan has serious import for Xinjiang and Tibet. Gladney writes, "China's 'Xinjiang Problem' has less to do with the Uyghurs as a Muslim minority per se, than it does with China's integrationist and developmentalist policies in the region." Unless these policies are changed, the release of a lone prisoner – however high-profile – will not bring peace to Xinjiang. – YaleGlobal

Prisoner's Release Does Not Herald a Xinjiang Spring 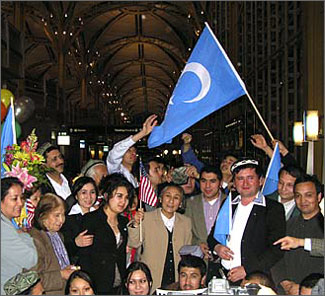 Not a swallow to herald the spring: Released Uyghur businesswoman, Rebiya Kadeer is greeted by family and friends in the US, with the flag of East Turkestan. (Photo: RFA)

HONOLULU: The recent release of Muslim Uyghur businesswoman Rebiya Kadeer from a Chinese prison on the eve of US Secretary of State Condoleezza Rice's first official visit smoothed the trip. But it also highlighted the continuing tension between Uyghur minorities in Xinjiang and the Chinese government. In the wake of the US decision not to charge Uyghur detainees from Afghanistan, the Kadeer release suggests a convergence of ideas: All opponents of the Beijing regime in Xinjiang may not necessarily be Islamic fundamentalist rebels or terrorists.

In August 1999, Kadeer was arrested for "revealing state secrets." Chinese officials believe she was the main financier of Uyghur terrorists, but human rights activists concluded that there was not enough evidence to detain her. As for the prisoners, though Washington has not officially admitted detaining Uyghurs in its Guantanamo base in Cuba, recent reports have indicated a US dilemma in seeking to repatriate some of them back to China: They cannot be guaranteed fair and humane treatment given China's human rights record; meanwhile, no other country will accept Muslims suspected of fighting with the Taliban and enemies of the Chinese state.

The plight of these prisoners and that of Kadeer have brought into focus the discontent of the Islamic Uyghur population of China. The examples of the Iraq election and other democratic ferment in former Soviet Republics underline the problem China must address: If China is to emerge as a legitimate world power, its dealings with dissenters will be crucial. And based on the history of China's dealing with the Uyghurs, many critics find China's actions suspect.

In late 2003, the Chinese government listed the East Turkestan Independence Movement as a terrorist organization; the US State Department and United Nations subsequently concurred. Outside analysts have routinely criticized China's actions (and US support for those actions) as "scapegoat terrorism": Rather than legitimate anti-terrorist measures, a ploy to gain international support for China's increasing integration and development of the oil-rich Western region. Indeed, most visitors to the region suggest that China's ruthless commitment to "modernization-no-matter-what" policy, despite the environmental, civil, and social consequences, motivates the "extremists" – not religion per se.

China waged its war on terrorism against a group of non-state actors, primarily living outside of China for at least two or three generations, largely organized through the internet, and for whom radical Islam has only recently begin to grow in appeal. Their rationale for violence can only be understood as ethnoreligious – the desire for liberation from a nation-state system that has wrested their religious homeland. The region, known to its natives as Eastern Turkestan or even Uyghuristan, was not labeled as "Xinjiang" (or "New Territory") by the Chinese state until 1884.

In May 2003, China released a detailed white paper on what is increasingly called "the Xinjiang problem," which for the first time detailed numerous incidents of terrorism and violence attributable to East Turkistan independence movements. The state staged multiple crackdowns, rounding up thousands of terrorist suspects, large weapons caches, and printed documents allegedly outlining future public acts of violence. One estimate suggested that in a country known for its frequent executions, Xinjiang had the highest number, averaging 1.8 per week, most of them Uyghur.

International campaigns for Uyghur rights and possible independence have become increasingly vocal and well organized, especially on the internet. There are at least 25 international organizations and web sites working for the independence of "Eastern Turkestan," and following 9/11, the vast majority of these organizations disclaimed any support for violence or terrorism, pressing for a peaceful resolution of on-going conflicts in the region. Nevertheless, the growing influence of "cyber-separatism" is of increasing concern to Chinese authorities seeking to convince the world that the Uyghurs do pose a real domestic and international terrorist threat.

China's Muslims are now facing their second millennium under Chinese rule. Many of the challenges they confront remain the same as they have for the last 1400 years of continuous interaction with Chinese society, but many others are new as a result of China's transformed and increasingly globalized society, and especially the watershed events of the September 11th terrorist attacks with the subsequent "war on terrorism."

Though small in population percentage, the Muslim populations of East Asia are nevertheless large in comparison with those of other Muslim states. Recent demographic shifts suggest that there are more Muslims living in China today than there are in Malaysia, and more than in every Middle Eastern Muslim nation except Iran, Turkey, and Egypt (and about the same number as in Iraq). Muslim identity in China can best be described as ethnoreligious in that history, ethnicity, and state nationality policy has left an indelible mark on contemporary Muslim identity, and it is almost impossible to discuss Islam without reference to ethnic and national identity.

If Kosovo and Bosnia are to serve as lessons, not to mention the recent attacks in Madrid and Amsterdam by Muslim Moroccan immigrants, failure to accommodate Muslim minorities can contribute to national dismemberment and international intervention. Indeed, China's primary objection to NATO involvement in Kosovo centered on its fear that this might encourage the aiding and abetting of separatists, a potential problem in light of the fact that independence groups in Xinjiang, Tibet, and even Taiwan, remain a major Chinese concern. While clearly China's recent anti-secession law is aimed at Taiwan, nevertheless it has serious import for Xinjiang and Tibet. In addition, when one considers the ethnic and religious insurgency in Iraq, it primarily involves a Muslim minority (the Sunni Muslims), who feel threatened by a democratic dominance by the Shi'ite and to some extent Kurdish majorities (who also happen to be Sunni). Thus, even in the Middle East, Muslim minority identity is a frequent site of ethnic and religious conflict. The Asian Muslim nation of Indonesia has struggled as well against its own Muslim minority independence movement in Aceh, not to mention the Philippines Mindanao struggle.

Successful Muslim accommodation to minority status in China can be seen to be a measure of the extent to which Muslim groups allow accommodation between their faith and local state policy. Indeed, the case of the Hui Muslims, China's largest Muslim minority, who have never seriously been charged with terrorism or separatism, suggests that there are possibilities for integration and accommodation of Muslim minorities in China. China's poorest and least educated Muslims, the rural Tajik, Dongxiang, Baoan, and Salar, have been the least engaged in violence against the state or attracted to radical Islam. Most importantly, China's Kazakhs, who number 1.3 million, amounting to one-eighth of the world's population of Kazakhs, have never attempted to secede and join the newly founded (and increasingly wealthy) neighboring state of Kazakhstan.

This suggests that China's "Xinjiang Problem" has less to do with the Uyghurs as a Muslim minority per se, than it does with China's integrationist and developmentalist policies in the region. If this is the case, the recent release of Rebiya Kadeer, the anti-secession law, and a strengthened war on terrorism in the region should do little to resolve the Xinjiang Problem in the years to come.

Dru C. Gladney is Professor of Asian Studies and Anthropology at the University of Hawaii at Manoa. His most recent book is: Dislocating China: Muslims, Minorities, and Other Subaltern Subjects (Chicago University Press, 2004). On-line articles and projects can be found at www.hawaii.edu/dru.