Locked in a food shortage approaching crisis proportions – which reportedly caused two million deaths in the past five years – the government of Kim Jong-il has been wooing neighboring China and its brethren to the South for more far-reaching aid. As Seoul-based journalist Shim Jae Hoon reports, this move comes at the expense of broader, international emergency efforts coordinated by organizations like the UN's World Food Program, whom North Korea has asked to leave by the end of the year. Citing a turn from immediate relief to "development-type assistance," North Korean officials have enlisted Chinese and South Korean help in redressing the calamities of decades of state-mandated agrarian planning. Importing new cultivation technologies from the South and relying on China's goodwill and lax food inspections, the North Koreans hope to beef up their agricultural production while avoiding the spotlight of international monitoring. Shim stresses the perils of this new diplomatic arrangement, warning that the expulsion of international donors could lead, among other things, to another famine. "Neither China nor South Korea would be politically equipped to deal with the new crisis," he says. Already engaged in a worldwide political chess-game over its nuclear weapons program, North Korea's risky moves over food may be gambling with the lives of millions. – YaleGlobal 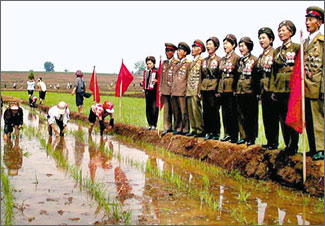 SEOUL: After depending on the international food aid to feed its population of 22 million for the past 10 years, North Korea is looking for a change. It has asked international relief agency officials, including those from the UN World Food Program (WFP), to leave the country by end of the year; and it is signaling readiness to modify its disastrous agricultural policy through a new agreement with the South. For the North Korean regime, the security that comes from dealing with accommodating regional neighbors like South Korea and China is far preferable to food security offered by its global links. At the same time, hard-line North Korea has indicated willingness to tinker with reform to resolve the perennial food shortage.

By limiting the source of food assistance to China and South Korea, a more reliable partner than the United Nations, North Korean leader Kim Jong-il hopes to avoid opening up the politically sensitive hinterland for monitoring by a variety of international food donors.

Closing the door on the international food agency means the regime is determined to safeguard its security – even at the risk of triggering a new famine. Meanwhile, it is toying with the idea of buying more time for its disaster-stricken farm policy with aid from the South.

Since 1995, when the regime was forced to admit to a critical food shortage, it has received more than US$2 billion worth of food aid. South Korea alone has shipped more than US$1.1 billion worth of grains and fertilizers. International relief agency officials have estimated that the five-year famine, the first such man-made disaster to hit a fully industrialized nation, probably killed up to two million people until 2000. But the Kim regime, the world's most secretive dictatorship, only admits to a death toll of around 220,000.

Visiting New York in September, North Korean deputy foreign minister Choe Su-hon told United Nations officials that his country now wanted a shift from emergency food aid to "development"-type assistance, presumably meaning advanced farming know-how and equipment for increased food production. In August this year, Pyongyang signed an agreement with Seoul accepting a delegation of agricultural specialists and latest farming technologies. It was an unprecedented move, indicating that the North was ready for significant policy reform. Under the accord, it will open up two collective farms – one on the east coast and another on the west coast, south of the capital – for experimental farming by South Korean specialists. Seoul will send new rice saplings and fertilizers, as well as the latest equipment for more efficient farming and harvesting. The program starts next year.

If changes recommended by the South are accepted, they could bring significant improvements. The North's farm policy has been a model of disaster through three decades of the party's misguided control. Under the state doctrine of "juche" (self-reliance), state president Kim Il-sung (who died in 1994) ordered hillside forests to be cut down in order to create terraced farmland. Farmers were also told to use high-density planting of rice and other crops for increased production. While the former caused annual flooding, the latter saw reduced harvests due to insects and humidity.

The North's annual food production – rice, maize, potato, corn – has seldom exceeded 4.3 million metric tons, a shortfall of 1.5 million tons, the absolute minimum the country needs to feed its people. The chronic food shortage turned acute in the early 1990s, with suspension of aid from the Soviet Union and Eastern Europe.

The North is now increasingly concerned over the political cost of relying too long on the West for survival. Although top leaders have privately thanked South Korea, the United States, and Japan for food aid, the state-controlled media have rarely mentioned their contributions. The regime is anxious to keep the news out of reach of average North Koreans, although tens of thousands of hungry people have already defected to China. In order to keep people in the dark about the extent of food aid from Seoul, Pyongyang refuses to allow South Korean vehicles to transport grains across the military border from the south. Food aid, therefore, is often transported via China or on third-country vessels, though South Korean vessels are sometimes used. Almost no land transportation is used, however, to avoid being seen by ordinary North Koreans.

Another concern is the international agencies' insistence on maintaining strict monitoring to ensure that their food reaches the neediest civilians – and not the 1.1-million-strong army. A tight monitoring system has been required not only to prevent some food going to the regime's elites – the army and other members of nomenklatura – but also to prevent rice from reaching the black market, where it is apparently sold by those not acutely in need of food. According to the US Committee for Human Rights in North Korea, a Washington-based NGO, up to a half of aid delivered by international agencies does not reach the intended recipients. In Seoul, some critics have demanded that food aid be changed from rice – mostly consumed by the elites – to coarse grains like maize, which is consumed by ordinary people.

If diverted distribution worries donors, the North's main concern is political fallout from monitoring. Under WFP rule, its personnel must travel to cities and villages in order to observe the proper distribution of food tickets and food grains. But Stephen Haggard, a University of California professor, and Marcus Noland, a Washington-based Institute of International Economics researcher, have recently written that Pyongyang is making it increasingly difficult to implement such monitoring.

For fear of outsiders probing into the reality of life in the North, the regime forbids most relief agencies from posting any officials who can speak Korean. It also seeks to curb the frequency of monitoring visits into the interior. China demands no such monitoring for the aid it provides. Nor does South Korea require anything more than a formality.

Pulling out international aid agencies will leave South Korea and China as the only substantial aid donors, giving them a unique chance to influence the North's policy. This positive aspect could overshadow their increased burden of having to feed North Koreans. But it remains to be seen if China will use this leverage to persuade the North to cede its nuclear weapons program and reform its trouble-laden economy. So far, it refuses to use food aid to force the North to change course.

It is even less clear as to whether the South will press the North hard enough to reform its farming policy by demanding an end to collectivization, despite the recent agreement on a farm modernization program. Preoccupied by the "sunshine" policy of reconciliation at all costs, Seoul hesitates antagonizing Kim. For this reason, the South refuses to comply with the US demand for tighter monitoring arrangements.

As for the North, its food crisis is far from over. Depending on the vagaries of weather, it could easily face a new outbreak of starvation. If that happened, neither China nor South Korea would be politically equipped to deal with the new crisis. Having acquiesced in eviction of international donors, how would they appeal for new international aid? And will Kim Jong-il remain strong enough to survive a second round of famine? Certainly, these are challenges facing both Seoul and Beijing.

Shim Jae Hoon is an independent journalist based in Seoul.