The warnings on protectionism are dire. Economists and historians repeatedly remind us about the danger of sliding into protectionism embodied in the notorious Smoot-Hawley Tariff Act of 1930. By raising import tariffs on thousands of goods, inviting retaliation, causing collapse of international trade, the act transformed a US recession into a Great Depression. Deepening anxiety about vanishing jobs and falling investment have once again created a 1930s type scenario in which politicians all over the developed world frantically try to revive the economy. In doling out public funds to stimulate the economy, politicians may have little choice but to take some protectionist steps, admits Jeffrey Garten, Yale professor of international trade and finance and a former US undersecretary for international trade. Global economic leaders must choose among the least harmful forms of protectionism, coordinating policy and documenting any economic impact for taxpayers. For example, Garten observes, the US failing to pass a $900 billion stimulus package could be more problematic than approving a package with some “buy American” provisions. Likewise, he notes, encouraging China to relax its currency rates is not worth the risk of social unrest. Still, global leaders must tread carefully, respecting the many beneficial but intricate connections that could unravel quickly in a climate of retaliation or panic. – YaleGlobal 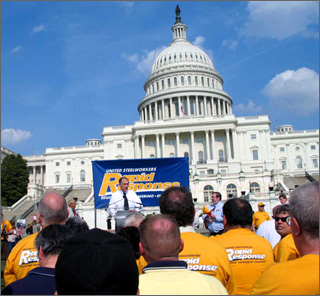 on Capitol Hill; protectionist temptation is hard to resist

NEW HAVEN: The world economy has a metastasizing cancer and the doctors do not know how to stop it from spreading. One problem leads to another, and whenever one remedy is applied, another part of the body contracts the disease. First it was sub-prime securities, then it was other risky assets like collateralized debt obligations, then credit in general, the stock market and a collapse of global growth.

Now there is an indication that the infection is reaching the vital organ of free trade. The rise of protectionism, if unchecked, will kill the world economy as we know it. The only hope at this point would be for everybody to admit that for political survival government leaders may have to take protectionist measures, but that they should consult with one another and limit the damage as much as possible.

Protectionism is something all leaders warn against after the lessons of the 1930s. Then, of course, one country retaliated against another with trade barriers, driving the world economy into a ditch and helping cause a world war. But talking about the need to resist protectionism and actually stopping it are two different things. Right now, unfortunately, there is no evidence that political leaders are on the case. Moreover, it is highly uncertain they could totally resist protectionist pressures, even if they wanted to. We may be witnessing a classic Greek tragedy.

To be sure, there are different categories of protectionist threats. There's tariff protection. This kind of action has been happening of late, but it is not out of control. India and Russia, for example, both pledged to fight protectionism at the G-20 meeting in Washington last November and then proceeded to raise tariffs on soybeans and cars, respectively. But the earth didn’t shake. A second kind of protectionism relates to non-tariff barriers. Exhibit A is anti-dumping duties. This has become more serious, as the number of anti-dumping investigations have been soaring of late.

There are other kinds of protection that could be much more serious. As governments prop up failing firms, as the US is doing for autos and the French for aviation, they are subsidizing failing industries to the detriment of competitors elsewhere. They are also discriminating against foreign companies, because their subsidies are typically just for national champions. For example, the US helped Ford, Chrysler and GM, but not Toyota and BMW, although the latter companies also have big problems and are big investors and employers in America. 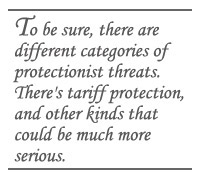 Closely related is the kind of protectionism which comes with “buy national” provisions in stimulus plans. The stimulus package in America, in its current draft form, mandates that new spending go to domestic producers of steel, cement and other products, even if foreign companies are more competitive. Despite President Barack Obama's statement that he doesn't want to violate trade agreements, the Buy America provisions have momentum in Congress, offering a recipe for other countries to do the same to American companies.

We are also seeing protectionism in the financial arena. There is pressure on banks that have received government investment to reduce foreign activities and direct their funds to investments in their own countries. Prime example: Great Britain. We can expect this tendency to widen to US and banks of other nationalities.

And finally there is competitive currency depreciation that makes a country's exports cheaper. In his Senate confirmation hearings, US Treasury Secretary Timothy Geithner accused China of doing just that and issued an ominous warning that could lead to sanctions. 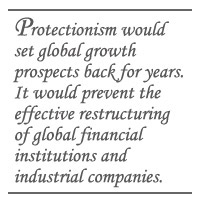 When you add all this up and consider the background against which it is taking place – negative global economic growth, soaring unemployment, a breakdown in the Doha Round of global trade negotiations, a growing involvement of governments as direct investors in banks and companies, with all the politicization of the economy that entails – it is more than a worrying trend. Protectionism would set global growth prospects back for years. It would prevent the effective restructuring of global financial institutions and industrial companies. It would impede the further integration of China, India, Brazil and other emerging markets into the world economy. It would erode what international cooperation exists in many other arenas, including non-economic ones.

But the fact is, you also must sympathize with political leaders who are caught in the vice of conflicting pressures.

Obama's most important goal is to get the $900 billion stimulus package passed. He's convinced, without that, the US economy could plunge into a depression. He could easily rationalize that such an outcome would be the worst one for the entire world. He could well believe that trying to rid the legislation of “Buy American” provisions would kill the bill, that keeping them is the lesser of two evils.

Prime Minister Gordon Brown has talked tirelessly about the dangers of protectionism. But he dare not encourage British banks to continue their international lending, not when Britain is in the middle of a credit crisis and also gripped by labor protests against the granting of contracts to foreign workers.

China has some 20 million migrant workers without jobs. How, realistically can the rulers allow the renminbi to appreciate and make their exports more expensive? They likely expect that the prospect of social unrest is much more damaging to China and the world than a cheap currency.

More generally, economic pressures have now morphed into serious political ones. The world is gripped by the related evils of nationalism, populism and increasingly save-yourself mentality. Democracy, for all its benefits, reinforces this tragedy, because voters are notoriously focused on the short term.

There are only a few ways to combat the tendency to look inward, and it’s hard to be optimistic about any of them. 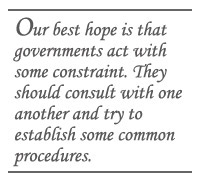 The world could look towards a charismatic leader such as Obama, but, as noted, he is deeply constrained. We could look toward a group of countries such as the G-20 to ward off the protectionist trend, but such a collective is likely to produce only the lowest common denominator of policy. Or, we could look to an established international institution to lead the way. But asked about stopping protectionism at the recent Davos meetings, World Trade Organization Director-General Pascal Lamy said that all the WTO could do would be to track infractions of existing trade laws.

Our best hope is that governments act with some constraint. They should consult with one another and try to establish some common procedures. This could include mandating the WTO or the International Monetary Fund to document for the public all new trade-distorting measures and their likely economic impact, thereby raising the barrier of taking anti-trade measures. They could agree that all protectionist measures will be limited in scope and time. And they could devote a lot more effort to cushioning the blow to workers hurt by rapid import penetration, in order to take some pressure off having to take protectionist measures in the first place.

For supporters of more rather than less trade, of whom I am one, it’s no use just screaming about the evils of protectionism. The premium now is on limiting it as much as realistically possible.