Protests Greet Yet Another WTO Meeting

As the World Trade Organization prepares to meet in Cancun, Mexico, backers and detractors of globalization are clashing again, with each side claiming to represent the interests of the world's poor. Those opposed to globalization in its current form point to an increase in inequality and poverty in countries that have opened up to international capital and corporations, while supporters cite declining poverty in areas of Asia and say increased poverty has more to do with inept governments and civil strife than open economies. Although each side in the globalization debate often oversimplifies the arguments of its opponents, says Pranab Bardhan, Professor of Economics at the University of California, Berkeley, there are serious people on both sides who view the results of globalization differently. For instance, activists say that many American companies with factories in underdeveloped countries pay miniscule wages and reap enormous profits at the expense of workers. But some economists point out that those wages, although tiny by US standards, are in fact high for a third-world country. While this argument should not allow us to dismiss genuine labor abuses, says Bardhan, it should lead us to focus on relative improvement when looking at the results of globalization. Instead of demonizing each other he concludes, both sides in the debate should focus on growing areas of agreement – like the destructiveness of total liberalization of capital and the need to help trade-displaced workers – in order to find real solutions for the world's poor. – YaleGlobal

Protests Greet Yet Another WTO Meeting 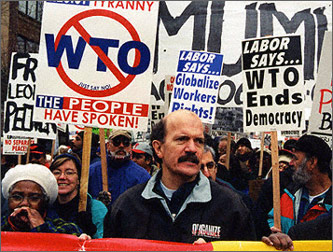 Anti-globalization activists in Seattle seemed to see only one side of the coin.

BERKELEY: As the world braces itself for the WTO Ministerial meeting at Cancun, we'll again hear the usual cacophony on globalization. As with most contentious public debates, those on globalization are now full of stereotypes and caricatures. The anti-globalization protests are often dismissed as the antics of affluent anarchists unwittingly acting as a cover for rich-country protectionism. On the other side, the advocacy of globalization by some economists and international organizations is described as preaching by free-market ideologues unconcerned about the poor and unwittingly covering for corporate lobbyists. Each side tends to ignore that the other side contains many thoughtful people who are trying to find ways in which the opportunities presented by the processes of globalization can be harnessed for the poor.

There are, of course, substantial differences among these two groups of people on the basic facts and on the relevant counterfactuals. On the facts, one side points out that in the recent decades of globalization poverty has not gone down in some countries in Latin America and in many countries in sub-Saharan Africa. The other side points out that in the same decades hundreds of millions of people have been lifted above minimum poverty standards in large, poor countries like China, India and Indonesia. Much of the persistence or even increase in poverty in Africa may have little to do with globalization, and more with unstable or failed political regimes, wars and civil conflicts which afflicted several of those countries. If anything, such instability only reduced their extent of globalization, as it scared off many foreign investors and traders. On the other hand, globalization may not be the only or even the main reason for the decline of poverty in large parts of Asia.

But the more striking difference between the two groups involves the counterfactuals they use to reinforce their points. For example, in the swirling controversies around sweatshops one side points out that the wage paid by a transnational company (let's hypothetically call it Nike) is usually higher than the wage in the vast hinterland from which streams of poor workers come, and the other side points out that this wage is dismal by some absolute standards and lower than what Nike can afford. The trade economists say that if there were no Nike, the wage would revert to the much lower hinterland wage. The important and difficult question then is how to make Nike accept lower profits without pushing some workers back to the hinterland. If rich-country consumers merely boycott what they consider sweatshop products unless Nike pays a 'fair' wage, it is very likely that many of the workers now banging at the gates of the sweatshops for a chance of entry will be sent back to the hinterland.

Similarly, those who complain about the exploitation of young women in the garment factories of transnational companies have to appreciate the relative improvement in the conditions and status of these women (say, in Bangladesh) compared to the alternatives otherwise available to them. (In their opposition to the garment sweatshops the campus radicals of the US are joined by the mullahs of Bangladesh who do not want young women to work outside the household.) This is, of course, not an argument against efforts to improve their appalling working conditions (and certainly not in favor of the totally indefensible cases of forced labor or hazardous or unsafe work conditions), but one has to be careful in looking at the reality of the severely limited opportunities faced by the poor and the possible unintended consequences of 'fair trade' policies which may end up punishing the victims.

The giant marketing chains based in rich countries often eat up a large part of the gains from trade. Just to cite one example, it was reported that in Ecuador the local producer gets only $2 or $3 for each 43-lb box of bananas sold by the marketing chains in US or Europe for about $25. What is the counterfactual here? The economist will say that the alternative scenario of no trade is worse for the poor banana grower. The activist-protester will urge that the transnational marketing company should keep lower margins, but if this is their goal, they should then agitate for anti-trust action, not anti-trade action. Without a large degree of monopoly power, these companies would not be be able to charge such inordinately high margins. This is a valid argument for starting an international anti-trust investigation agency, possibly under the WTO. But the high-margin transnational retail chains with global brand names are often needed by poor countries to provide quality guarantees for their products. This suggests the urgency of coordinated attempts at building international quality certification agencies to help marketing by the poor countries themselves.

Instead, the protesters often agitate for the abolition of the WTO. There is no doubt that the large corporate lobbies of rich countries dominate the agenda-setting and decision-making of the WTO, and there is a great need to make international organizations like this more transparent and responsive to the world's poor, whose lives their decisions affect. But what is the counterfactual? If the alternative to a multilateral organization like the WTO is for a poor country to face the US in bilateral trade negotiations, the US is likely to be much more dominant in such negotiations than in the dispensations of the WTO (which in its arbitration decisions has occasionally ruled against the US position).

It is true that opening the economy often increases economic inequality, as examples from China to Latin America show. This may be associated with decline in poverty in some cases (China) but not in others (some countries in Latin America). But the counterfactual question is if the poor will do better by closing the economy. The closed economies of the past have not been much kinder to the poor. Whether a country can harness the opportunities unleashed by globalization to help its poor depends a great deal on the structure of domestic social and political institutions. Weak states, unaccountable regimes, lopsided wealth distribution, and inept or corrupt politicians and bureaucrats often combine to block out opportunities for the poor.

Fortunately, there is now some slowly developing measure of agreement between the two sides of the globalization debate. For example, many people on both sides agree that protection and subsidization of farm products and simple manufactures (like textiles and clothing) in rich countries severely restrict the job prospects in poor countries. Many of the otherwise pro-globalization economists now have reservations about the liberalization of capital markets that allows completely unrestricted herd-like movements of short-term financial capital across the globe, ravaging fragile economies in their wake, or about intellectual property rights of large companies that protect for a prolonged period their monopoly pricing of products essential for the world's poor. They also often agree on the need for international sponsorship of adjustment assistance for trade-displaced workers in poor countries. There are areas where many people on both sides see the potential of some degree of coordination and international partnerships between transnational companies, multilateral organizations and NGO's in research and development (in drugs, vaccines, and crops) which can be beneficial to the poor. We should try to go beyond the contentious debates and build on these areas of emerging consensus and cooperation, because no matter where one stands, globalization cannot be wished away.

Pranab Bardhan is Professor of Economics at the University of California, Berkeley, and co-chair of the MacArthur Foundation-funded Network on the Effects of Inequality on Economic Performance. He is Chief Editor of the Journal of Development Economics.