There is a surprising gap between government and public views on migration. Most governments tend to be favorably disposed to immigration, while the public remains fearful of admitting foreigners. Such a divergence in opinion is likely to cause significant turmoil in the future, according to Joseph Chamie, research director at the Center for Migration Studies. Less than 20 percent of governments globally view immigration as too high while public opinion polls reveal that in aggregate close to 70 percent of citizens believe immigration should be restricted. Some of the divergence can be attributed to perspective. Individuals fear job losses and cultural degradation due to immigration while governments note the economic benefits of attracting skilled workers or currying favor with ethnic associations. But this migration gap cannot continue much longer without a backlash, writes Chamie, noting successes of anti-foreigner politicians and parties in recent elections. Until a mature discussion between the government and its constituents is held on the benefits and costs of immigration, xenophobia, even violence, will be the likely consequence. – YaleGlobal

Turmoil likely until the costs and benefits of immigration are addressed frankly
Joseph Chamie
Friday, October 16, 2009

NEW YORK: Despite the known reluctance of the overwhelming majority of people in most countries to let in immigrants, governments continue to promote policies that maintain or increase immigration levels. This thorny gap between public opinion and government policies on immigration is leading increasingly to social unrest, political upheaval and in some instances even violence.

Whether in affluent countries in the West or less wealthy nations in the developing world, people are concerned about immigration. In addition to unemployment and economic uncertainties, people are worried about losing their traditional culture and national identities; they feel that their way of life is being badly affected and needs protection from the adverse effects of foreign influences. Opinion polls regularly report that large majorities believe that there should be greater restriction of immigration and tighter control of their country's borders.

A global study of public attitudes by the Pew Center in 2007, for example, found that the majority of the people in 44 of the 47 countries surveyed agree with the statement: “We should restrict and control entry of people into our country more than we do now” (Figure 1).   With the exception of a few low-immigration countries, i.e., Japan and South Korea, majorities in every country surveyed said that their countries should restrict immigration and control the entry of people more than they do now.

This view is especially widespread in Africa and Asia, where at least 75 percent of the public polled felt that immigration should be more restricted and controlled. Majorities wishing for increased restrictions on immigration were also prevalent throughout countries in North and South America. Similar sentiments were shared by the greater part of the populations in Europe, even in countries facing population decline and ageing, such as Italy and Russia. In fact, Italy led Europe with nearly 90 percent of the Italians agreeing that their country should restrict and control the entry of people more than it does today. As it is the landing-point in Europe for many migrants from Africa, the number of immigrants in Italy – currently 4 million – grew faster during recent years than in any other European country. Also last year, Italy experienced a 75 percent leap in unauthorized migrants arriving by sea to more than 37,000.

In addition, whereas a handful of countries had policies to lower immigration for permanent settlement, not a single developed nation had policies to lower the immigration of highly skilled workers. On the contrary, most developed countries are competing globally to recruit and retain talented highly skilled workers, such as scientists, doctors, nurses, teachers and high-tech personnel. For example, the United Kingdom expanded economic immigration with visas for highly skilled economic immigrants to enter the country without a job offer, but simply on the basis of their skills. Some European countries, such as Germany and the Netherlands, have instituted fast-track visas and “Green Card” systems, similar to the US, to attract highly skilled migrants, especially IT specialists. In the United States even local school districts have turned increasingly to overseas recruiting to find skilled teachers: for example, teachers recruited from the Philippines are reported to make up more than 10 percent of the teaching force in the Baltimore Public Schools.

The views and policies on immigration among countries in Latin America and the Caribbean are virtually the same as those of the more developed countries, i.e., few governments view immigration levels as too high or have policies to lower them.   Also, as is the case elsewhere, few African or Asian governments have policies to lower the immigration of highly skilled workers. On the contrary, countries such as Indonesia, Singapore and South Africa are seeking highly skilled workers to enhance their labor forces and advance their economies. 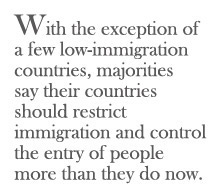 In addition to the migration gap between governments and the public, law enforcement officials and policymakers are viewed by the public as lax in implementing approved policies and enforcing existing laws relating to immigration. For many, simply the presence of tens of millions of unlawful residents in the labor force attests to such laxity. By and large, authorities tend to tolerate those who continue to remain or even work unlawfully in the country, unless they commit a serious crime or are considered a national security risk. While this tolerance may be beneficial for the immigrants – especially those unlawfully resident – and their supporters, this accommodating behavior does not escape the attention of the general public and contributes to undermining the public trust and the rule of law.

Governmental authorities frequently overlook enforcing policies and laws on immigration to maintain good relations with immigrant and illegal alien communities as well as to curry favor with current and likely future voting supporters. For instance, the Marxist government in West Bengal, India is reported to be lax in dealing with immigrants from neighboring Bangladesh as they provide a vote bank. In addition, powerful interest groups, such as business communities, political elites, ethnic associations and labor-exporting nations, actively lobby and pressure governments for policies that promote immigration and advance legalization or amnesty for illegal aliens. For example, the US Chamber of Commerce strongly advocates a continuation and expansion of both temporary and permanent visa programs for highly skilled workers and pushes for comprehensive immigration reform that includes a pathway to legalization of undocumented workers. 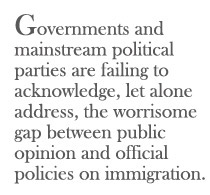 The benefits derived from these pro-immigration lobbying efforts are considerable for these various groups. Developing countries, for example, are able to export their excess labor as well as receive large sums of valuable foreign-exchange remittances. Last year such remittances amounted to over $300 billion. Businesses are able to operate with an amenable and low-cost labor force, to recruit highly skilled foreign workers at discount rates, and to expand consumer demand and hence boost corporate profits. Government officials and political elites gain from promises of political backing and campaign financing, enhanced overseas influence, greater numbers of supportive voters, prospects of increased tax revenues as well as a larger pool of potential recruits for the military. Ethnic associations also gain with additional members reinforcing their culture, adding to their coffers and strengthening their political and voting clout.

Governments and most mainstream political parties are failing to acknowledge, let alone address, the worrisome gap between public opinion and official current and proposed policies on immigration. The consequences of this neglect are likely to become even more serious over time, giving rise, among other things, to increased xenophobia, vigilantism, violence and political extremism as well as the strengthening of radical factions on both the left and right. Some of these troubling developments, e.g., rising xenophobia and the success of nationalist parties, have recently become markedly more visible in such countries as Italy, Greece and Switzerland.

Governments need to address the migration gap as a priority today or risk confronting even more serious, costly and harmful societal troubles in the near future. Good first steps include forthright and candid dialogues between government officials and concerned citizens on the various costs and benefits of immigration as well as genuine consideration of immigration policies and programs that take into account the interests, concerns and welfare of the general public.