The Central African Republic is a recent example of how Russian President Vladimir Putin is investing human resources and muscle for access to natural resources and trade deals in Africa. Africa is poised to represent 25 percent of the world’s labor force by 2050 with its 54 countries having the potential to be an influential voting bloc in the United Nations. The continent has an abundance of rare earth materials, and its importance cannot be understated. Whereas China’s investment is well documented, Russia’s support includes paramilitary support and expertise. Russia provided a security advisor to CAR, and Egypt and Russia are collaborating to inaugurate a Russian-African Summit in October with 50 African leaders. Russia has already signed military deals with 20 countries. The Trump administration has taken notice, but has so far not followed through with a new Africa strategy. – YaleGlobal

The United States has lost interest in Africa, and Russia steps into the vacuum of influence with military support and trade
Frederick Kempe
Wednesday, June 19, 2019

Read the article from CNBC about Russia expanding influence in Africa.

Frederick Kempe is a best-selling author, prize-winning journalist and president and CEO of the Atlantic Council, one of the United States’ most influential think tanks on global affairs. He worked at The Wall Street Journal for more than 25 years as a foreign correspondent, assistant managing editor and as the longest-serving editor of the paper’s European edition. 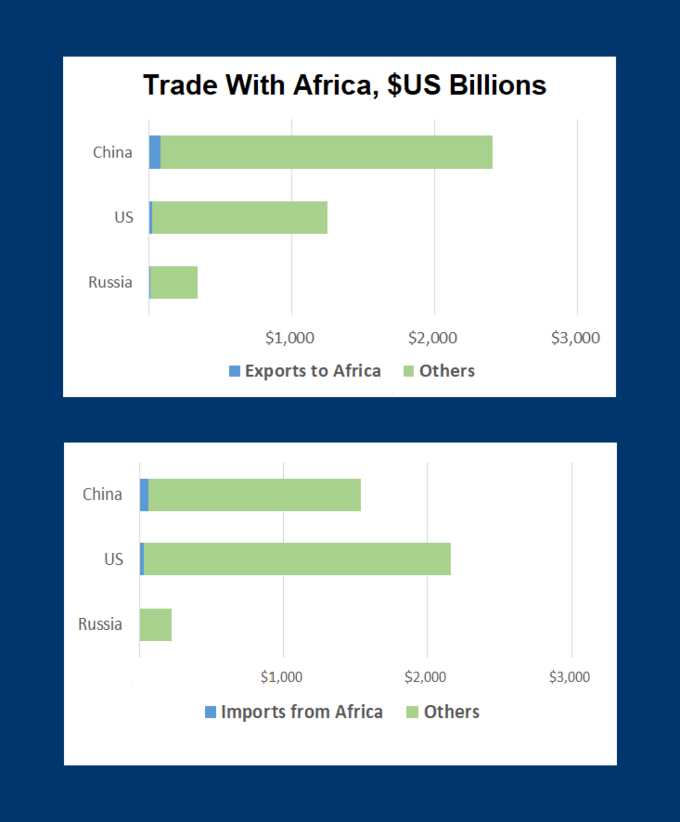 Africa trade in context: The 2017 imports and exports with Africa for China, the US and Russia are small but carry big impact (Source: Observatory of Economic Complexity)

China, Russia Seek to Profit as the EU Beacon of Democracy Goes Dim

Fall of Gaddafi: Policy Challenge for China and Russia