Venezuela is in crisis with corruption, food shortages and power outages. The international community remains divided over a remedy. The United States supports new leadership, represented by Juan Guaido, president of the National Assembly, after a disputed election. Russian Foreign Minister Sergei Lavrov describes such support as a US-led coup and supports the Nicolas Maduro regime, in power since 2013 and in charge of an economy in steady decline. Venezuela owes Russia and China billions in dollars. For now, China describes its stance as neutral and opposes intervention. Russia has dispatched two cargo planes with specialists and equipment. Some analysts compares Venezuela’s situation to Syria’s: The US protested Russia’s intervention in support, but not stop the country’s control of airspace. US officials suggest that two cargo planes are minimal, meant to protect Russian personnel and help with repairs of an air-defense system. More US sanctions are expected, delaying Venezuela’s massive debt repayments. “More sanctions will hopefully deter the Russians further,” Eli Lake concludes for Bloomberg. “In which case, the Trump administration will be able to continue what has been a largely bipartisan policy: encouraging a nonviolent, democratic transition in Venezuela.” – YaleGlobal

Two cargo planes of Russian military assistance aren’t enough to make a difference to Maduro’s survival in Venezuela; the US need not worry yet
Eli Lake
Wednesday, March 27, 2019

Read the article from Bloomberg about Russia sending military specialists and equipment in support of the Maduro administration in Venezuela. 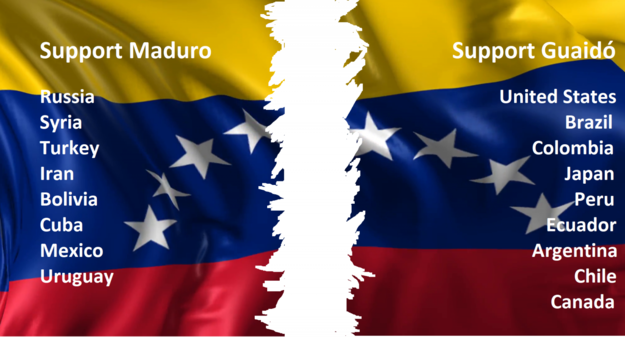 This image was replaced to show the proper countries under the two leaders, Maduro and Guaidó.

Russia Reaches Out to Venezuela

Venezuela Is Not a Big Priority for Russia, China or Iran