Fear of trade has emerged to be as potent a weapon in the hands of the Democratic candidates as fear of terrorism proved to be for the Republicans in the last two US elections. The unilateralist policies of the current administration have produced not only enormous negative political returns for those now in the White House, but also mean that the Republican candidate shoulders a heavy burden. Stoking fear for short-term electoral gain could prove just as disastrous for the Democratic Party. If the opportunity arises for the current candidates' fear-of-trade rhetoric to be turned into reality, less, not more, prosperity would be the result. The politics of fear can blow problems out of proportion, trap leaders into untenable policy positions and encourage costly overcompensation. "It is inevitable to find an unfortunate parallelism between the Democrats' 2008 reliance on a fear-of-trade strategy to get votes and the Republicans' reliance on fear of terror," writes Ernesto Zedillo, director of the Yale Center for the Study of Globalization. Fear-mongering may capture votes of anxious citizens, yet it can't be turned off like a spigot once the presidential campaign ends. Instead the elected officials feel compelled to carry out their electoral platform, creating bitterness abroad and causing a new set of crises. – YaleGlobal

By whipping up fears of terror and trade, US presidential candidates may win, but won’t solve problems
Ernesto Zedillo
Monday, March 10, 2008 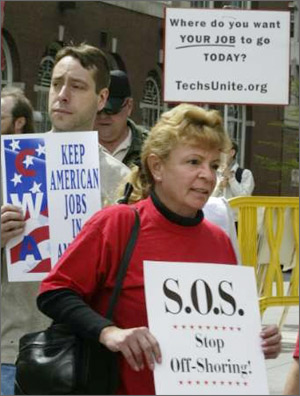 Season of fear: Politicians may win votes by exploiting fear, but resultant

policies could poison the fruit of victory

NEW HAVEN: With the American election season upon us, fear once again emerges as the most salable commodity for aspiring presidential candidates. As the primary results show, the fear of trade has emerged as the potent weapon in the hands of Democratic candidates, much as fear of terrorism was in the hands of their Republican rivals for the previous two election seasons.

Back in 2002 when American leaders began turning aggressively unilateralist and preparing public opinion for eventual military intervention in Iraq, I suspected that this stand had to do with short-term electoral politics more than anything else. I sensed that political strategists from the party in power in the United States had detected an electoral gold mine in the American psyche brought about by the barbarous 9/11 attacks. 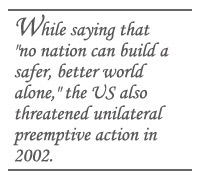 My concern was reaffirmed by their rhetoric and actions during the fall of 2002 as the country approached its November elections. Over and over again I tried unsuccessfully to understand whether the steps being taken by the US government really made sense from the perspective of the country's long-term interest.

Reading the National Security Strategy (NSS) document released by the US administration in September of 2002 reaffirmed my fear that there was no coherent vision of strategic value for the United States.

I observed that the NSS presented two mutually inconsistent views – one unilateralist, the other emphasizing international cooperation – on how to go about addressing the legitimate security concerns of the US. While saying that "no nation can build a safer, better world alone," it also threatened unilateral preemptive action: "We must be prepared to stop rogue states and their terrorist clients before they are able to threaten or use weapons of mass destruction against the United States and our allies and friends."

Eventually, as we know, in the struggle between these two doctrines aggressive unilateralism won over, leading to the invasion of Iraq. This decision has imposed huge human and material costs with no evident benefit for the strategic interests of the US. 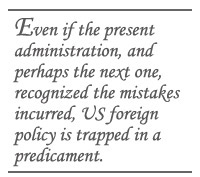 Given my belief that the fundamental motivation for the bellicose policy adopted by the US had been an electoral one, I was appalled by the attempts of many intellectuals who, after the fact, tried to dress up that policy as a grand strategy to spread freedom and democracy in the regions of the world recalcitrant to these values. If there weren't so many lives lost and other tragedies involved, the grand-strategy justifications for the faulty intervention would be laughable today.

Admittedly, the unilateralist policy provided excellent electoral results for its proponents not only in 2002 but also in 2004. Yet it was just a matter of time – and of lives sacrificed – before that policy would have negative political returns. Now, the war's mounting costs and lack of patent benefits for the American public's security have dramatically eroded political support for President Bush. It is also clear that this burden will constitute a huge electoral handicap for the clinched Republican candidate, the respectable Senator McCain, who is a strong supporter of the present administration's policies in Iraq. Even if the present administration, and perhaps the next one irrespective of party, genuinely recognized the mistakes incurred, US foreign policy is now trapped in a predicament that doesn't have a good solution. Every conceivable scenario out of this quagmire is a nasty one. It is not about opting for the best course of action, but about determining which one is the least worst.

Having overcommitted to a policy with far-reaching national and global implications essentially only through the filter of short-term electoral politics has proven, and will continue to prove, costly and traumatic for many years to come for the US and the rest of the world. I believe that failure to pay attention to this lesson by the remarkable politicians competing in the US presidential electoral process would be a terrible mistake. Unfortunately, it seems to be happening already. 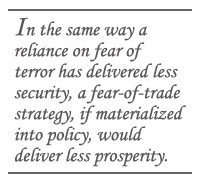 Alarmingly, the competitors in the Democratic Party are also playing electoral politics on another fundamental issue in a way that would prove damaging to the interests of the US and the world at large. That issue is trade. It has been truly disheartening to hear statements from senators Clinton and Obama on their purported trade policies. It is hard to accept that politicians of their intellectual stature truly believe what they have said about the effects of existing US trade policies on the wellbeing of the American people. For example, they have submitted that entire cities have been devastated by trade agreements alone, that NAFTA has cost the US economy jobs and has meant a race to the bottom on both environmental and labor issues, that trade deals underlie the huge US trade deficit, and so on and so forth.

They and their respective advisers on economic issues must know very well that these statements are not warranted by any serious study. Cherry-picked anecdotal evidence is not enough to validate the protectionist oratory of the otherwise brilliant candidates.

Fifteen years after Ross Perot's false claim that NAFTA would cause a "giant sucking sound" of jobs fleeing to Mexico, it is shocking to hear these candidates recycling Perot's political marketing.

For example, for Latin America the so-called war on terror has meant, in practical terms, a policy of neglect on the part of the US. Because of the US distraction in Iraq, Latin American issues have only come intermittently and diffusely onto the US foreign policy radar. What the Democrats are saying is that if they make it to office, Latin Americans would be on the radar – and that's the good news -- but not for the better on issues of trade. That's the bad news. 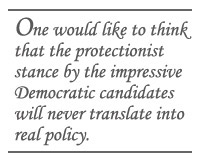 On trade, they are promising not to ignore Latin Americans; in fact they offer to be active not only against further trade liberalization, but even to cripple the already existing trade agreements between the US and its southern neighbors. Were these proposals to materialize into actual policies, they would destroy jobs and reduce income in both the US and its Latin American partners.

This is a high price to pay for the support of some special-interest groups in the current campaign. One would like to think that the protectionist stance by the impressive Democratic candidates will never translate into real policy.

Unfortunately both recent and old experiences show us that once the forces of protectionism are unleashed, anything short of complete surrender would fail to placate their proponents. It would then be evident once again that votes won for the wrong reason are Pyrrhic victories.

Ernesto Zedillo is the director of the Yale Center for the Study of Globalization and former president of Mexico.