Since the first test of a nuclear weapon at Alamogordo, New Mexico on a summer day in 1945, a terrible device for mass slaughter has continued to gain ground. Although only five permanent members of the UN Security Council are nuclear weapons powers, two others - India and Pakistan - have blasted their way into the nuclear club. Israel, which, like India and Pakistan, has not signed the nuclear non-proliferation treaty, is also believed to possess nuclear weapons. North Korea, which has for some time been known to possess fissile material worth one or two weapons, has now become the first country to leave the NPT. In this article the author argues that unless urgent steps are taken to prevent North Korea from expanding its nuclear program, the country may soon be able to build a few more bombs. - YaleGlobal.

Only a jumpstart to negotiations between the US and North Korea can halt deterioration
Nayan Chanda
Tuesday, January 28, 2003 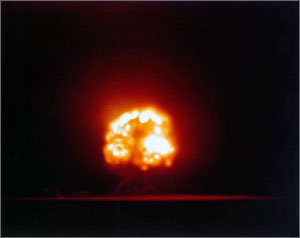 Trinity atomic test in 1945. Is North Korea getting ready to blast into this club? (Photo: U.S. Department of Energy)

NEW HAVEN: The postponement of the International Atomic Energy Agency board meeting and the talk about a negotiated settlement of the North Korean crisis have created a false air of calm. Unless the United States promptly engages Pyongyang in dialogue and sends back the monitoring team to watch over the North Korean nuclear program, the world may soon be facing a dangerous situation.

The time-tested tactic of ignoring the hostage taker's demands and wearing them out by protracted negotiation may not work with Pyongyang. Even if it does not openly relaunch its nuclear program, it may simply use the time to accelerate its clandestine effort to acquire fissile material and strengthen its bargaining hand. A month has passed since the seals on nuclear facilities were broken and IAEA inspectors were expelled. US experts believe that in another month, the North Koreans will be able to begin turning their stored spent fuel into bomb-making plutonium. The only hope of preventing that would be to insist on the return of arms inspectors as a precondition for dialogue with the US.

The strong possibility that North Korea could take more dangerous steps in their nuclear defiance makes this an urgent situation. First, it is a mistake to underestimate North Korea's paranoia about an impending American preemptive strike (A North Korean radio broadcast claimed last week that Washington is buying time under the pretext of dialogue and negotiations while "it prepares for dangerous war of aggression on our republic, targeting the next phase of a war in Iraq.") Second, one cannot ignore North Korea's redoubtable skill in presenting the world with a fait accompli achieved in total secrecy. They may figure that the further down the nuclear weapons road they go, the more bargaining leverage they accumulate. 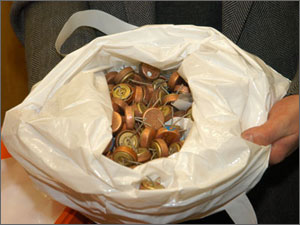 IAEA Seals Broken by North Korea. Can they be put back? (Photo: Hansen/IAEA)

Pyongyang's penchant for purple prose notwithstanding, many experts on North Korea's nuclear program say the country's paranoid leadership may well be rushing to acquire a few more nuclear weapons as deterrence against the United States. Gary Samore, Non-Proliferation Fellow at the International Institute for Strategic Studies, says the North Koreans "believe they have a window of opportunity to rush ahead while the US is preoccupied with Iraq." Former State Department official in charge of non-proliferation Robert Einhorn also sees urgent North Korean interest in developing a deterrent capability. He points to both the rhetorical attack on North Korea in the state of the union speech in 2002 as well as evidence of Bush's personal loathing of Kim Jong Il ("I loathe Kim Jong Il. I've got a visceral reaction to this guy," Bush told the Washington Post's Bob Woodward) that has given North Koreans reasons to worry that they are going to be the next target. "If they have to develop deterrence against such attack, what is a better time than now - with Bush preoccupied with Iraq and transitional governments trying to find their feet in China and South Korea," Einhorn says.

Among the many contradictory signals emerging from Pyongyang, there is an assurance that it does not intend to go nuclear "at this stage." One would have to ignore the two decades of North Korean cheating and lying to take that promise at face value. With the expulsion of the IAEA inspectors, the world's ability to know what has been going on in North Korea's nuclear complex has been drastically reduced. North Korea specialist of the Library of Congress Larry Niksch says, "It's very doubtful that we have the capability of knowing what is going on in Yongbyon on a daily basis." There is at least one news report that suggests that shortly before announcing its withdrawal from the nuclear Non-proliferation treaty North Korea received a large shipment of a key chemical solvent needed for reprocessing plutonium - tributyl phosphate - from China. There is growing concern among nuclear experts that if North Korea begins reprocessing the spent fuel (which has so far remained sealed and under IAEA surveillance) the world may not know about it till it's too late.

US failed to detect plutonium making in 1989-90

Consensus among most nuclear experts is that in about four to six months, North Korea can turn the 8,000 fuel rods, which have been kept sealed as part of the 1994 Agreed Framework, into enough plutonium for making six additional bombs. Some doubt that North Koreans would be able to bring their reprocessing plant on-stream in a short time because it has been mothballed since 1994. One expert says it would require extensive checks in plumbing before tons of highly radioactive spent fuel would be allowed to flow through the pipes of the 600 feet long factory. A UN official in Vienna hints that North Korea may be less thorough about such precautions. "Every country has different regulatory regimes and one country may be more thorough or safety conscious," he says. A US administration official shrugs: "Right now we are placing our hope on [North Korean] machine failure to prevent them from producing bombs."

If North Korea decides to begin reprocessing, they have only a short distance to cover to remove the irradiated fuel rods from the cooling pond to the reprocessing plant. In theory transportation of those fuel rods in shielded vehicles may be observed by spy satellite or reconnaissance planes like U-2 but they can also be moved undetected. One of the easiest would be to time the transportation with the absence of a prying eye in the sky - the gap in the passage of satellites overhead. Leonard Spector of the Monterey Institute of International Studies' Center for Nonproliferation Studies, a former senior official of the US Department of Energy (which was involved in canning North Korea's spent fuel ), says he wouldn't be surprised if those fuel rods were dispersed in secret locations for fear that the US might bomb the reprocessing plant.

Even more difficult would be finding out if North Korea has actually begun reprocessing plutonium. The process by which plutonium is extracted from spent fuel results in the release of a gaseous Krypton isotope, but that can only be detected by sensors in the immediate vicinity and not by spy planes at 80,000 feet. It is possible that technological advances made in the past decade have given the US better means to detect such activity. Gary Samore, who served in Clinton White House, notes that the US failed to detect North Korean production of plutonium in 1989-1990. Only the IAEA analysis of North Korean data later revealed that reprocessing campaigns conducted in those years gave North Korea enough fissile material to build one or two nuclear bombs.

If Pyongyang manages to produce an extra six bombs from the reprocessed plutonium, a Bush administration official says, North Korea may choose to abandon its deterrence through ambiguity and demonstrate its nuclear status by conducting a test. Then it may even sell a couple of devices to the highest bidder.

The White House is trying to defuse the North Korean crisis by holding out promise of negotiations at a future date and by encouraging international emissaries - Australian to Russian - to travel to Pyongyang to calm the North Korean leadership down. The administration has also repeated the pledge North Koreans want - a pledge of non-aggression, recognition of North Korean sovereignty, and non-interference in North Korea's economic development. In a bid to dampen criticism that focus on Iraq has led to the flaring up of the North Korean situation, Colin Powell even downplayed the significance of North Korea acquiring a few more weapons. "They have had these couple of nuclear weapons for many years, and if they have a few more, they have a few more, and they could have them for many years." he said. The public display of nonchalance hides a deep worry in the administration. Recently former secretary of defense William Perry revealed that the US had made contingency plans to attack North Korean nuclear plants if they were seen to be moving to reprocess plutonium from the stored spent fuel. "There must be people at the Pentagon who have pulled out the 1994 plan and put it back under review," Niksch says.

Experts like Einhorn believe it is theoretically possible to send two Tomahawk missiles to the Yongbyon reprocessing plant and destroy the possibility of large scale production of plutonium. But once the fuel rods have been moved to the site and chemical processing has begun, any explosion would cause local radioactivity. Destroying the plant beforehand may thus be the better option from the point of view of radiation hazard. But the North Koreans are likely not to treat it as a limited attack only aimed at disabling their nuclear capability but rather as an attempt to snuff out the regime. A massive retaliation by North Korea using thousands of artillery shells with chemical and biological agents may have catastrophic consequences for the population of Seoul and the 37,000 American troops in South Korea. 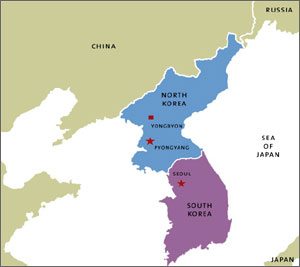 Map of North Korea and South Korea, which shows both capitals, plus North Korea's nuclear complex in Yongbyon.Enlarged image

Once reprocessing begins, the choices are stark. The US option then would be to either launch a strike against North Korean nuclear installations, with unpredictable consequences, or to stomach the emergence of a declared nuclear power in East Asia, along with all the strategic upheaval that may entail. It is clear that Washington needs to start talking, but it should do so only on the condition that North Korea observes a verifiable freeze during the course of the negotiations. Only by returning international inspectors on the ground and resealing the facilities can we be sure that at least those known facilities are not being restarted. Engaging North Korea won't be easy either. Their demands for dialog and recognition may seem benign enough, but once the negotiations begin, the Bush administration will find, as did Clinton's negotiators in 1993, that talking with North Korea involves an ever-deepening commitment to shoring up the dictatorial regime. Nonetheless, that may still be worthwhile, because the longer the US waits, the greater the risk to the security of East Asia and the world.