Bullying authoritarian leaders cannot endure criticism or democratic checks on their policies by journalists or courts. Agents with the National Bureau of Investigation arrested Maria Ressa, editor of the online news site Rappler. Rappler is a publishing partner of YaleGlobal Online. “Her arrest is the most dramatic sign of Mr. Duterte’s crackdown on the free press in the Philippines,” reports Alexandra Stevenson for the New York Times. “Duterte has not tried to hide his disdain for journalists, calling reporters ‘sons of bitches’ and ‘spies’ and even warning that they are ‘not exempted from assassination.’” The arrest is related to an article published in May 2012 and a law passed in October 2012. She was also arrested in December on a tax-evasion charge. The Committee to Protect Journalists honored Ressa with a press freedom award in 2018, and she warned: “There is a global playbook, and autocrats are learning from each other.” – YaleGlobal

Maria Ressa, editor of Rappler who has criticized Philippines’ Duterte, is arrested; she warns that autocrats are learning from one another how to attack their critics
Alexandra Stevenson
Wednesday, February 13, 2019 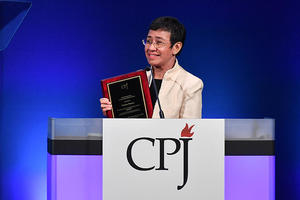 Read the article from The New York Times about the arrest of Maria Ressa, editor of Rappler, a YaleGlobal partner publication.

Read about the Committee to Protect Journalists: “CPJ exists to defend the basic principle that journalists, wherever they are in the world, should be free to report the news without fear of reprisal. We defend this fundamental right everywhere that journalists are threatened, from Afghanistan to Zimbabwe….CPJ works to ensure that freedom of expression is defended and preserved around the world. We will continue to stand up for your right to informaotn in the global society.” 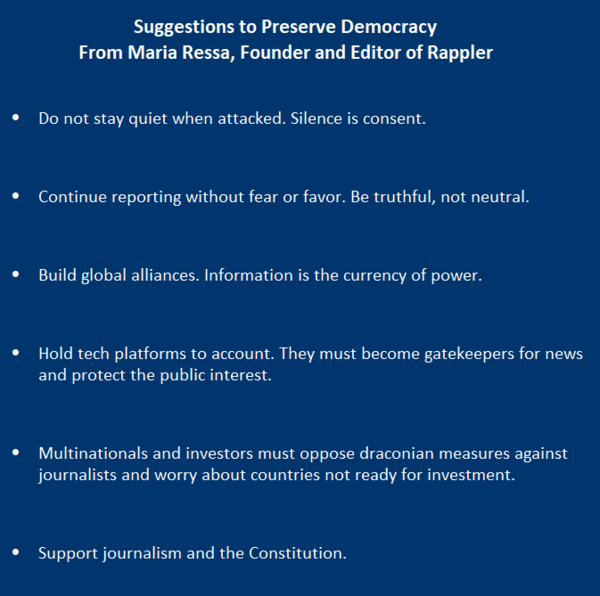