A Report from the Ground Zero of China’s AIDS Crisis

The international community has praised the Chinese government for its recent change of heart toward the AIDS crisis. Whereas central authorities considered the epidemic a foreign issue just five years ago, Chinese leaders today acknowledge the severity of the problem and are participating in international programs aimed at the prevention and treatment of the disease. Journalist Pierre Haski who has spent time in the most affected Henan province, however, argues that the reality on the ground belies the government's lofty words. The miserable conditions in Henan, where an infamous blood-trade scandal in the early 1990s left thousands of peasants infected, warrant special attention. In contrast to the positive changes seen in Beijing, the government of Henan continues to downplay the extent of the disease and resist outside assistance. Inadequate measures, such as the distribution of pharmaceuticals with notable side effects, have been rejected by patients – leaving many without sufficient treatment and social support. "Until [the central government] brings assistance and justice to the victims of the Henan blood scandal," notes Haski, "it's too early to cheer Beijing's change of heart on HIV/AIDS." – YaleGlobal

A Report from the Ground Zero of China’s AIDS Crisis 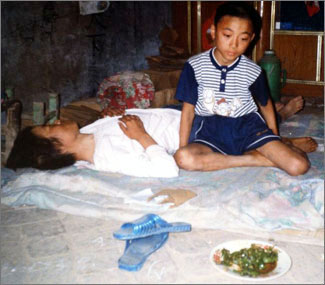 Lone vigil: A child sits by a dying mother in Henan, the ground zero of China's HIV/AIDS crisis

BEIJING: In a recent meeting with UN officials, China's Premier Wen Jiabao announced that the Chinese government is "determined and capable of curbing the spread of the disease (HIV/AIDS); to ensure the people live a healthy and peaceful life." China has indeed stopped playing the ostrich with head in the sand, but in the region where HIV/AIDS exploded, the old habit of secrecy still rules. With the government drastically underreporting the extent of the disease and resisting foreign help to fight it, thousands of infected Chinese are being left to further spread the virus and die unattended. Despite the public revelations of mass infections through contaminated blood, Henan residents continue to practice unprotected sex and send migrant workers to China's booming coastal region.

Only five years ago, AIDS was nowhere on the country's leadership radar screen. On World AIDS Day, December 1, 2000, the government treated reports about the epidemic as "foreign news." Nowadays, HIV/AIDS-related news appears regularly in newspapers and television. In a highly symbolic move – in China, the impulse still has to come from the top – the president and prime minister publicly shook hands with AIDS patients. Having made important commitments to address the AIDS crisis, the Chinese government now participates in international programs promoting both prevention and treatment of the virus.

The international community praised the Chinese government for its change of heart toward a world epidemic that is still far from contained, particularly in Asia. But as is often the case in China, there is a big gap between the central government's stated intentions and some of its provinces' real actions. HIV/AIDS provides a tragic example of this well-known characteristic of Chinese politics.

The central province of Henan, a poor, rural, and densely-populated region of 100 million, has been hardest hit by the virus – the result of an infamous blood-trade scandal in the early 1990s. Authorities encouraged Henan's poor peasants to sell their blood to collecting stations for industrial use. Residents still remember the slogan, "It is glorious to sell your blood." Also, the 40 yuan ( US$4.80 ) compensation was a welcome relief for low-income families. Tragically, no precautions were taken, and tens – probably hundreds – of thousands of these peasants, who had never heard of AIDS, were infected with the deadly virus.

The country's political system made a bad situation worse. My recent research shows that the authorities at local, provincial, and central levels knew everything by 1995: They stopped the blood trade, but did nothing about the mass contamination. Between 1995 and 2003, people living with HIV/AIDS were not informed of their infection, nor of the risks of contamination. Mothers gave birth to HIV-positive babies; existing treatments could easily prevented these transmissions. Meanwhile, adults – particularly migrant workers in the industrial zones of eastern China – continued to have sexual relations without any precautions.

When, as a reporter, I first visited the "AIDS villages" in 2001, people were totally ignorant of the plague that was striking their helpless communities: The disease had no name (They called it "the fever."), and the first peasant I interviewed asked if it was contagious. Visitors could meet dying patients who had received no treatment for lack of money, orphans taken care of by villagers' solidarity, and peasants with scars on their arms for selling their blood hundreds of times in the early 1990s – and wondering if they would be next to become ill.

When the first cases of illness, the first mysterious deaths, appeared, some Chinese doctors realized, often by chance, that something had gone awfully wrong. They were harassed and pressured to keep silent. The first Chinese journalist who reported the first cases of "mysterious illness" lost his job and became a kind of "political refugee" in the capital, Beijing. Things have changed since 2003, and these courageous doctors once considered subversives, like Dr. Gao Yaojie, a retired gynecologist from Zhengzhou, Henan's capital, have been rehabilitated in Beijing. Newspapers in Beijing and Guangzhou have been at times outspoken about the scandal.

But in Henan itself, what has changed since 2003? Unfortunately, not enough. Even the number of contaminated peasants remains unknown, and the ministry of health in Beijing laughs at Henan's official tally of 22,000. Dr. Zheng Ke, one of the Chinese doctors with the best field experience in Henan, puts the estimate at 300,000; others speculate the figure is closer to 500,000 or even a million. No one knows for sure.

Officially, the government has started distributing free antiretrovirals, the treatment that can stop the progress of the disease. The leadership has granted free education for children of AIDS patients and help for their communities. In reality, these treatments have been inadequate; a majority of patients rejected them because of side effects, while others have been trying all kinds of medicine, including experiments from Chinese army research centers. Many have opted against treatment altogether – and anxiously wait for their death. Worse, some were abandoned, like one man I met who was clearly developing the disease and who had been left waiting for a month for the results of his blood test. In dozens of interviews last year, I did not meet a single patient who was correctly treated.

This medical chaos would be enough to justify outside assistance. But Henan authorities are adamant not to allow any outside presence. When I travelled to the "AIDS villages" last year, I had to arrive at midnight and leave before daybreak to avoid the militias formed to stop journalists and non-government organizations, both Chinese and foreign, from visiting AIDS patients. International NGO's like Doctors Without Borders, have seen their offers of assistance rejected by Henan and have opened in other provinces – Hunan and Guangxi – AIDS clinics which, in partnership with local governments, bring their valuable experience in fighting the epidemic in other countries. Chinese NGO's trying to organize orphanages for the thousands of Henan children who have already lost their parents have been violently chased from the province and their institutions closed. I was a witness last year to one such incident in the town of Shengqiu, and saw the children's panic as police surrounded the building in an aggressive way.

This leaves tens of thousands of Henan peasants without adequate treatment, without any social support, and having to face the hostility of authorities who fear retribution for their role in the contamination process a decade ago. At the beginning of this year, China organized a massive campaign of solidarity for the victims of the Southeast Asian tsunami and raised more money than many developed nations. This, as many victims of official neglect, political cover-up, and medical chaos are waiting in Henan to see the central government put its positive attitude in action before it's far too late. Until it brings assistance and justice to the victims of the Henan blood scandal, it's too early to cheer Beijing's change of heart on HIV/AIDS.