Blocking most of the internet within Iran’s borders was the government's response to nationwide protests over a rise in fuel prices. The US ambassador to Germany suggests that the United States and European Union could restore internet access, and he called on tech and telecom companies to provide service. Limited communications could be available with the help of secret servers, explains Fabian Schmidt for Deutsche Welle. Such primitive networks were used during the 1990s in former Yugoslavia. “As long as the servers were able to reach a telephone number in a free country, communication with the internet and the rest of the world was assured,” Schmidt writes, noting that delivery could take days rather than seconds. “The backbone of a contemporary system in Iran and other countries with authoritarian governments would be the hundreds of thousands or even millions of smartphones that people carry around with them.” Protesters in Hong Kong and Lebanon have set up such parallel networks to avoid government tracking. Likewise, programmers can use cell phones as wireless routers for message distribution. Anonymous purchase of cell phones is required to avoid digital tracking. Also, satellite phones could be distributed to trusted users. – YaleGlobal

US ambassador to Germany suggests that the US and EU could restore Iran’s internet after regime shuts it down during protests against fuel prices
Fabian Schmidt
Monday, November 25, 2019

Read the article from Deutsche Welle about Iran responding to protests by blocking most of the internet. 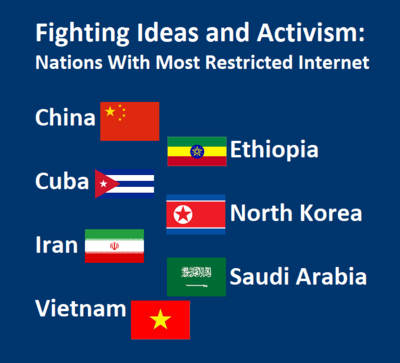 The Globalization of Censorship