The United States is weakening its future capability with unsustainable federal spending. The US budget deficit exceeded $1 trillion for the most recent fiscal yea, and the Congressional Budget Office anticipates the federal debt as a share of GDP increasing to at least 144 percent by 2049, and possibly higher. “The large deficit will crowd out important federal programs, including needed infrastructure investment, as well as private investment needed for economic growth,” explains John Taylor, professor of economics with Stanford University, for Project Syndicate. “Debt service will account for a rising share of spending, and the high debt will likely increase interest rates by more than the CBO assumes, leading to an economically perilous debt spiral.” The country could avoid such calamity by reducing federal spending as a share of GDP, not with strict austerity programs but with targeted reductions that boost government efficiency. More efficient, targeted spending and reduced deficits would strengthen the US economy for the long term. – YaleGlobal

The US federal budget deficit is climbing; gradual fiscal consolidation, with reduced federal spending as a share of GDP, would create a more resilient economy
John B. Taylor
Saturday, January 25, 2020

Read the article from Project Syndicate about a recommendation to reduce US deficit spending.

John B. Taylor is Professor of Economics at Stanford University and Senior Fellow at Stanford’s Hoover Institution. His most recent book (with George P. Shultz) is Choose Economic Freedom. 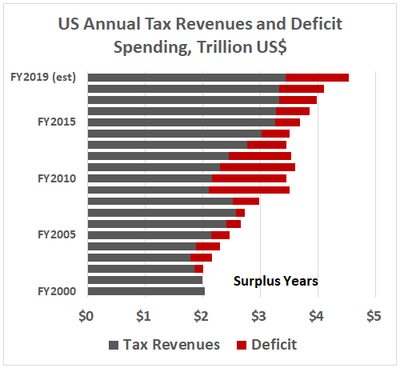 (Source: Deficit and tax revenues by year, The Balance, )