Alternative for Germany, of AfD, holds less 15 percent of the seats in the German Bundestag, but research suggests the right-wing political party dominates Facebook, representing more than 80 percent of shared German political posts. Such activity, while over-representing actual support for AfD, could still give the party a boost in the May 23 European parliamentary elections. AfD relies on multiple social-media accounts and frequent sharing; negative campaigning; photos including those from Russia image databases; some automated and fake accounts; and content designed to trigger fear about immigration, crime and taxes. “Experts believe that support for the AfD is consistent with Moscow's strategic intention of destabilizing Western democracies by strengthening extremist forces,” reports a team for Spiegel Online. Extremists and populists benefit from the ease and emotion of social media messaging as well as low turnouts in elections like that for the European Parliament. – YaleGlobal

Analysis reveals how much German right-wing populists from the Alternative for Germany, AfD, dominate the social media landscape with help from abroad
Jörg Diehl, Roman Lehberger, Ann-Katrin Müller and Philipp Seibt
Tuesday, May 7, 2019

Read the article from Spiegel Online  about AfD’s dominance of political posts on Facebook. 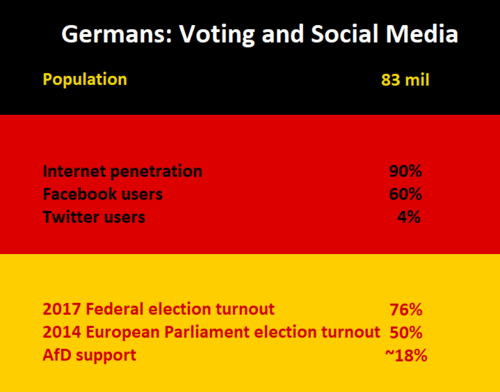 Germany’s Nationalist Movement Rides on a Wave of Islamophobia