The Rise of a New Axis?

North Korea is at it again. On the eve of a new round of diplomatic talks on its troubling nuclear program, Pyongyang has upped the ante: Announcing that it has already manufactured 'nukes,' the government suddenly suspended its participation in negotiations. This revelation comes in the wake of US reports that North Korea secretly shipped nuclear material to Libya, a shipment which was intercepted by the US-led non-proliferation grouping. With the shutting down of the underground nuclear sales network previously run by Pakistan's A.Q. Khan, writes nonproliferation expert Leonard S. Spector, North Korea is likely emerging as the rogue supplier of choice. The continuing Iranian effort to develop undeclared nuclear weapons-fuel, along with the North Korean sales activity, may set the stage for a new relationship with Iran, warns Spector. Both parties would have much to gain from this clandestine trading alliance. If they succeed, the world may witness the troubling emergence of a "North Korea-Iran nuclear axis" – and a rash of nuclear proliferation that could be a source of instability for years to come. – YaleGlobal

The Rise of a New Axis?

Washington may have cause to worry about a Pyongyang-Tehran nuclear alliance
Leonard S. Spector
Friday, February 11, 2005 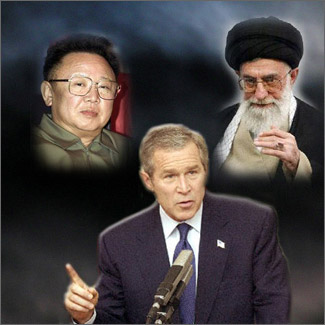 WASHINGTON: North Korea's abrupt announcement that it has manufactured nuclear weapons "for self-defense" and is suspending participation in disarmament talks underscores the dangers posed by its nuclear potential and seriously dims prospects that it will ever be eliminated.

Pyongyang's assertive new stance does not, in itself, change the facts on the ground. The United States has assumed for some time that North Korea has a nuclear arsenal of roughly eight plutonium-based weapons, and it is known to have production capacity for roughly one weapon per year. In addition, Washington believes North Korea has a program for enriching uranium, the second material that can be used for nuclear weapons. The status of that program, which received extensive assistance from the nuclear smuggling network led by Pakistani nuclear scientist A.Q. Khan, remains uncertain, but it could eventually enable Pyongyang to add several weapons annually to its stockpile.

In September 2004, North Korea announced at the United Nations that it had transformed material for nuclear weapons "into arms," but the Bush Administration treated the announcement as less than definitive. Since the US elections, Washington has pressed North Korea to restart the "Six-Party Talks," which also include China, Japan, Russia, and South Korea. The talks are aimed at persuading Pyongyang to cede its nuclear weapons and production capabilities in return for US diplomatic recognition, substantial foreign aid, and assistance to its energy sector. The talks, launched in 2002, have been deadlocked over the sequence for implementing the bargain, the United States demanding that North Korea first eliminate its nuclear capability before receiving any benefits, and the North insisting on a step-by-step process, with benefits accruing at an early stage.

North Korea's announcement appears to end prospects for a negotiated elimination of its nuclear potential, although the United States and its Northeast Asian partners will undoubtedly keep the door open. Even Pyongyang has stated that it is "suspending" its participation in the talks, rather than withdrawing permanently from them.

North Korea's new belligerence comes at a moment when another development had greatly heightened US concern over that country's nuclear potential: evidence that North Korea was the most likely supplier of uranium hexafluoride for Libya's now renounced nuclear weapons program. The transfer, attempted 18 months ago, was interdicted through a US-led multinational effort, known as the Proliferation Security Initiative.

Libya had planned to improve the uranium to weapons-usable, highly enriched uranium in a gas-centrifuge uranium enrichment plant. At first, because the A.Q. Khan network had supplied equipment for the enrichment plant, it was assumed that the uranium hexafluoride had been produced in Pakistan and smuggled to Libya.

But, based on extensive technical analysis, the new US assessment that the uranium originated in North Korea, proved more credible. Importantly, it provides the first publicly disclosed evidence that Pyongyang has become a player in the secret nuclear supply market. The development adds further urgency to efforts to constrain North Korea's nuclear capabilities because if Libya was its nuclear customer yesterday, Iran – already buying North Korean intermediate-range missiles – may be its nuclear customer today, or could become one tomorrow. And if North Korea continues to enlarge its own nuclear arsenal, it may have much more to sell, including weapons-ready uranium or plutonium – or nuclear weapons themselves. Now that Khan and his network have been shut down, North Korea is likely emerging as the rogue supplier of choice.

In Tehran, meanwhile, another nuclear negotiation, with considerably more promise than the Six-Party Talks, is under way. This bargain is being brokered by France, Germany, and the UK, with US engagement behind the scenes. In late 2002, it became known that Iran had pursued a clandestine uranium enrichment program for over a decade. Again with the help of the A.Q. Khan network, Iran developed the ability to manufacture enrichment centrifuges; set up a pilot enrichment plant; and was building an industrial-scale enrichment facility. Because Iran is a party to the nuclear Nonproliferation Treaty, all of this work should have been disclosed to the International Atomic Energy Agency and placed under IAEA inspection to ensure it was not used for nuclear arms. (A uranium hexafluoride plant, initially assisted by China, was declared to the agency.) Although the IAEA detected traces of highly enriched uranium on some of the Iranian centrifuge equipment, it remains unclear whether Iran has in fact crossed this critical threshold. Iran claimed that the equipment was contaminated with highly enriched uranium produced by its previous owner, Pakistan, although Iran has not specifically acknowledged the Pakistani connection.

Iran argues that it is building its enrichment capability to supply low-enriched fuel for future nuclear power plants. But the evidence does not add up: Iran currently has only a single power reactor under construction, the Russian-supplied Bushehr reactor, and the contract specifies that Russia will supply all the low-enriched fuel needed for that reactor. Given the secret history of the Iranian enrichment program and its unconvincing justification, virtually all observers perceive the effort as a transparent bid to develop an Iranian nuclear weapon capability.

The deal being negotiated with France, Germany, and the UK would require Iran to freeze these activities, as well as those at a second set of facilities that appear designed to produce plutonium, an alternative material for nuclear weapons. The IAEA would monitor all relevant sites to ensure Iranian compliance. In return, Europe would lift trade restrictions, Iran would gain access to currently prohibited high-technology, and, possibly, the West would assist Iran with a truncated nuclear power program that would not include facilities for enriching uranium or separating plutonium. Tehran's missiles – capable of reaching Israel – would not be included, nor would the chemical weapons that the United States believes Iran retains.

The United States is uncomfortable with the nuclear deal. Its fundamental concern is that Iran will cheat and build new enrichment facilities at secret sites, notwithstanding the relatively robust IAEA inspections prescribed under the deal. Indeed, last month, Iran appeared to be protecting some nuclear-weapons related activities from IAEA scrutiny, restricting its access to portions of a site where Iran is allegedly developing the triggering components for nuclear arms.

As the IAEA monitors Iran's known nuclear facilities, the most effective way for Tehran to build a new clandestine enrichment capability would be with assistance from abroad. If the uranium hexafluoride sale to Libya is any indication, North Korea stands ready to help. Tehran, whose enrichment program is well advanced, may have technical know-how to trade to North Korea as part of the bargain. The two states are thought to have collaborated on intermediate-range missiles: North Korea – having accepted a voluntary moratorium on missile launches – most likely supplied the missiles and a production capability in exchange for Iranian missile test data.

With the end of Libyan and Iraqi nuclear programs, the "Axis of Evil" is not what it once was – but a North Korea-Iran nuclear axis seems all too likely. Now that North Korea has declared itself nuclear power and rejected negotiations to eliminate this capability, thwarting such connections will be more difficult than ever.

1 Khan, known as the father of the Pakistani nuclear deterrent, acknowledged his smuggling activities in February 2004 and, in a prearranged deal, was immediately pardoned by Pakistani President Pervez Musharraf. He is now under de facto house arrest in Islamabad and much of his network has been rolled up.

Leonard S. Spector is the Deputy Director of the Monterey Institute Center for Nonproliferation Studies.