Rising Dragon and the American Eagle – Part I

Recent developments – including the high-profile visit by China's premier Wen Jiabao to South Asia – showing the rising profile of China have intensified a long-running debate in Washington. How does the growing power and influence of China affect the dominance that the United States has so far enjoyed in Asia? In the first of our two-part series, George Washington University's China scholar David Shambaugh sees signs that should worry the US. He says that China's increased economic power and its sophisticated policies have prompted countries along its periphery to readjust their relations with Beijing. "As China's influence continues to grow, many of these countries look to Beijing for regional leadership or, at a minimum, take into account China's interests and concerns in their decision-making," he says. A recent Australian poll showing China's growing popularity against declining esteem for the US is only the latest indicator of the shift taking place. Shambaugh says that the US remains the most powerful player, but "nonetheless, the shifting public perception of China and the United States – as reflected in the polls mentioned at the beginning – is an indicator of current trends and perhaps a harbinger of things to come." – YaleGlobal

Rising Dragon and the American Eagle – Part I

China's growing economic power and diplomatic clout may portend a turning of the tide against the US in Asia
David Shambaugh
Wednesday, April 20, 2005 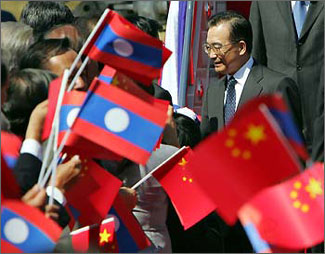 WASHINGTON: In a recent poll of Australians conducted by the Lowy Institute in Sydney, 69 percent of those surveyed had "positive feelings" towards China, while only 58 percent had such sentiment for Australia's staunch ally, the United States. Equally striking is that 72 percent of respondents agreed with Australian Foreign Minister Alexander Downer's expressed view that the United States should not automatically assume Australia's assistance in the event that US becomes embroiled in a conflict with China over Taiwan.

Other surveys over recent months in South Korea and Thailand – which, together with Australia, the Philippines, and Japan are the formal US allies in Asia – have revealed similar shifts in perceptions. The Thai and South Korean publics clearly hold very positive images of China, while their esteem for the United States has declined.

What is going on here? At the governmental level, all five allies profess their official allegiance to the US alliance architecture that has maintained peace and stability in East Asia since at least 1975. But these polls do reflect rather dramatic shifts in public opinion throughout many Asian societies – in favor of China and against America. The significant exceptions to this rule are in Japan and Taiwan – where the opposite trend has occurred.

First – particularly relevant in the South Korean case – Seoul finds itself much more in tune with Beijing's views (and vice versa) than Washington's approach to the North Korean nuclear problem. Publicly, the South Korean and US governments profess their agreement on the Six Party Talks and how to handle the North – but underneath, the ROK government shares many perspectives with China.

Second, many Southeast Asian governments are frustrated by Washington's myopic focus on the war on terrorism in the region, while not being attentive to a variety of other regional concerns.

Third, and of greater importance, has been China's "charm offensive" and very successful diplomacy in recent years throughout the Asian region. Taken together with Washington's twin preoccupations with the North Korean nuclear problem and the war on terror, China's proactive approach to its neighbors has contributed to this shift in regional perceptions.

China's increased economic power and these changing perceptions have prompted countries along China's periphery to readjust their relations with Beijing. As China's influence continues to grow, many of these countries look to Beijing for regional leadership or, at a minimum, take into account China's interests and concerns in their decision-making. Although China is far from being the only consequential power, its desire for a larger role has become a principal catalyst in shaping a new order in Asia. The region's increasing view of China as a status quo power is even more pronounced when compared with the frequently negative images of China in the past.

Multilaterally, China's deep engagement with the Association of Southeast Asian Nations (ASEAN) and the Shanghai Cooperation Organization (SCO) countries in Central Asia reveals a key element in Beijing's enhanced regional profile: It reflects an increased appreciation by the Chinese government of the importance of norms and "soft power" in diplomacy. Chinese print media, television, music, food, and popular culture are spreading around the region as never before. So, too, are Chinese tourists fanning out across the region, often filling the void left by American tourists staying home after 9/11, the Bali bombing, and tsunami; 800,000 Chinese toured both Thailand and Singapore in 2004. 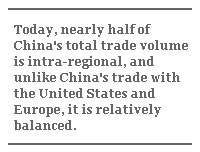 Beijing's growing appreciation of "soft-power diplomacy" is also evident in China's efforts to train future generations of intellectuals, technicians, and political elites in its universities and technical colleges. China increasingly sees higher education as an instrument of statecraft. Approximately 80 percent of the 78,000 foreign students studying in Chinese universities last year came from other Asian nations. Calculating the influence of this academic training on future generations of Asian elites is difficult to measure with any precision, but their experiences will certainly sensitize them to Chinese viewpoints and national interests. Those who enter officialdom may be more accommodating of Chinese interests and demands. They will also share personal connections with former classmates and will move up through professional hierarchies simultaneously.

China's growing engagement with the Asian region is perhaps most evident in the economic domain. According to official Chinese customs statistics, trade between China and the rest of Asia topped US$495 billion in 2003, up 36.5 percent over 2002. During the first eight months of 2004 (final year-end figures are not yet available), China's exports and imports continued to surge; exports to its 13 neighbors grew by an average of 42 percent, while imports surged on average 66 percent. Trade growth has been stimulated particularly by sharp rises in China's imports of components and semi-finished products from around the region (which jumped 42 percent to US$272.9 billion), much of which is assembled into final-demand goods and exported to the United States and Europe. Today, nearly half of China's total trade volume is intra-regional, and unlike China's trade with the United States and Europe, it is relatively balanced.

In the security sphere, considerable anxiety remains about the pace and scope of China's military modernization program, as well as Beijing's refusal to renounce the use of force against Taiwan. The recent passage of China's "Anti-Succession Law" only heightened these concerns.

Yet, in recent years, Beijing has become much more sensitive to these regional concerns and has worked hard to try and assuage them. China has been able to offset concerns about its buildup against Taiwan with a series of confidence-building measures of four principal types:

• increased participation in the ASEAN Regional Forum (ARF), which Beijing sees as a potential catalyst for establishing a regional cooperative security community, and

• increased military transparency, as demonstrated by its publication of several defense white papers and invitations to observe Chinese military exercises.

Again, while regional concerns remain regarding China's military capabilities and ambitions, these efforts have gone some way towards ameliorating the angst.

Despite the significance of China's regional rise, it is tempting – but premature – to conclude that the Asian regional system has become Sinocentric or dominated by China. This is decidedly not the case. China shares the regional stage with the United States, Japan, ASEAN, and increasingly India. The United States remains the region's most powerful actor, although its power and influence are neither unconstrained nor uncontested.

Today, the Asian regional order is an increasingly complex mosaic of actors and factors. China is certainly among the most important of these, and its influence is being increasingly felt. Nonetheless, the shifting public perceptions of China and the United States – as reflected in the polls mentioned at the beginning – is an indicator of current trends and perhaps a harbinger of things to come.

The author is Professor of Political Science & International Affairs, and Director of the China Policy Program, in the Elliott School of International Affairs at The George Washington University in Washington, D.C. Portions of this article are drawn from his recently-published article “China Engages Asia: Reshaping the Regional Order, published in International Security, Vol. 29, Issue 3 (Winter 2004/2005), available at: http://mitpress.mit.edu.