Recent developments – including the high-profile visit by China's premier Wen Jiabao to South Asia – showing the rising profile of China have intensified a long-running debate in Washington. How does the growing power and influence of China affect the dominance that the United States has so far enjoyed in Asia? In the second of our two-part series, Georgetown University's China scholar Robert Sutter argues that, despite many worrying signs, US power in Asia remains strong. Chinese economic growth and diplomatic outreach, while impressive, remain hindered by both domestic and foreign policies. Politically, new tensions have led many other Asian countries to reinforce their relations with the United States, which Sutter argues never really declined in the first place. China cannot afford to alienate the US by pursuing aggressive policies aimed at regional domination. For that reason, Washington's continued leadership in Asia – despite naysayers' predictions – remains the optimal, if not the only, strategic aim for Beijing. – YaleGlobal

China is on the rise – but US influence in Asia shows no signs of waning
Robert Sutter
Friday, April 22, 2005 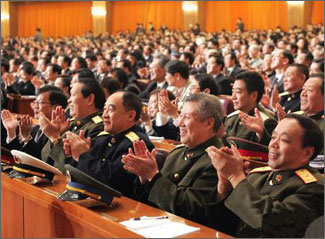 If you are happy clap your hands: Military members of the China's National People's Congress back the anti-secession legislations but the West is concerned. (Photo: Xinhua)

WASHINGTON: Secretary of State Condoleezza Rice's inaugural swing through Asia has brought in its wake another spate of stories about China's growing challenge to US leadership. Despite Rice's strong emphasis on relations with democratic allies as a linchpin of US Asian strategy, one of the United States' long-standing allies – South Korea – boldly stepped aside to claim a role as "balancer" between China and the US-Japan alliance. An Australian opinion poll showed the US trailing behind China in popularity. So, should Washington worry about its slipping leadership?

China has surely made gains. Its sometimes maladroit and disruptive past policies have given way to attempts at broadening common ground that are welcomed by most of its neighbors. Chinese leaders embrace a variety of Asian groupings to the satisfaction of other regional participants. Taken together, these recent developments prompt many media and other commentators to predict Chinese ascendance in Asia at the expense of US leadership, which is seen as mired in problems of its own making notably on account of unilateral policies in Iraq and the broader war on terrorism. However, a careful assessment shows limits of China's influence, and resiliency of US leadership.

China's staggering economic growth is undeniable. China is a manufacturing base and central destination in the burgeoning intra-Asia and international trading networks producing goods, notably for export to developed countries. China's over US$1.1 trillion foreign trade in 2004 involved a processing trade value of over US$600 million; about 60 percent of Chinese exports and 50 percent of Chinese imports involved products made from imported components and materials and sold abroad.

China has also embarked on a large-scale development of infrastructure. Already massive investment in fixed assets – plant, property, and infrastructure – increased over 40 percent from early 2003 to early 2004. Capital investment as a share of GDP in 2003 was 43 percent – a level widely seen in both China and abroad as unsustainable but nonetheless continuing for the time being. In Asia, China is a top trader with such key neighbors as South Korea (2004 trade over US$60 billion), Japan (2004 trade including Hong Kong over US$210 billion), Taiwan (2004 trade over US$60 billion), and a number of Southeast Asian countries.

However, it would be hasty to assume that China's obvious economic heft accompanies equally influential political and diplomatic influence. Last month, China's image suffered with the passage of a hard-line anti-succession law that worsened relations with Taiwan and increased tension in Asia. The law underlined an important reality – China's approach toward Taiwan, arguably the most important regional issue for China, has failed; and it has fallen to the Bush administration to keep pro-Taiwan independence movement within Beijing's bounds. Other Chinese limitations showed in Sino-Korean disputes over the historical Goguryeo Kingdom; strident pressure against dignitaries from Singapore and other Asian states seeking to visit Taiwan; a tough warning to Australia to stay out of Taiwan military contingencies; growing Sino-Japanese tensions leading to greater official Japanese assertiveness over Taiwan; deepening awareness among Asian manufacturers as to the threat to their markets posed by China; and an inability – despite protracted and extraordinary efforts--to join the upper ranks of donors after last December's Tsunami disaster.

China's geo-economic strategy in Asia also has practical limitations since the country remains very poor, as Chinese leaders themselves admit. China's per capita GDP of over US$1,000 ranks well behind the 100th place in the world. It remains a significant net recipient of foreign aid. China's annual dues to the United Nations are small, and its ability to invest and give aid to Asian neighbors is undercut by strong domestic development priorities. Overall, Chinese investment abroad in 2004 was US$ 3.6 billion, a tiny fraction of world investment and less than 10 percent of the investment flowing into China. China's foreign aid outlays are even smaller.

Reflecting its limited power, China approaches US leadership in Asia with care. Chinese leaders are loath to devote top priority to marginalizing the US influence in Asia at a time of major internal concerns regarding sustaining economic growth and political stability. At the same time, Chinese leaders have worked for over 50 years to rid their periphery of the great American power presence. The Chinese military continues to devote extraordinary efforts to purchase and develop weapons systems to attack Americans in a Taiwan contingency. China also continues to counter US influence through trade agreements, rhetoric, Asia-only groupings and other means that amount to a soft balancing against the US superpower.

In the view of Chinese officials, the Bush administration appears more prepared than previous US governments to act strongly and effectively in the face of Chinese assertiveness and opposition. In response, Chinese officials in recent years emphasize China's recognition of US dominance in Asia and a determination that its rising stature in Asia not be seen as a threat by the United States.

Elite and public opinion in many Asian countries will likely remain critical of the US government, but Asian governments probably will continue to react pragmatically to American policies, seeking to keep relations on a good foundation. The United States is important for their economic development and the security environment in Asia. They remain wary of rising China and its possible ambitions, and see the United States as a needed counterweight. Even in South Korea, a country swept by anti-US sentiment and pro-China fever in recent years, government officials privately assess that continued South Korean ties with the United States are essential in South Korea's ability to deal effectively with China.

One way to assess the perceived US decline relative to China is to compare the recent situation in Asia with past periods of US decline and rise of other powers. In the last few decades, there have been two notable periods of perceived or actual US decline in Asia. The first was the post Vietnam War period, which saw a marked rise of Soviet military-backed expansion in Asia. The second was in the latter part of the 1980s, when Japan seemed to dominate much of East Asia while the United States seemed unable to compete, even in the US domestic market. In both cases, the perceived US weaknesses turned out to be exaggerated as did the strengths of the newly rising powers. It is unclear if this third major episode of perceived US decline, along with China's rise, is the product of similarly distorted views. What is clear to seasoned observers is that any decline that has taken place in US power relative to China does not compare in scope or importance to the challenge to US power and influence in the 1970s and the late 1980s. The notion of China's rising over a declining America seems greatly exaggerated.

1 Chinese specialists publicly complain, "We need to find out who is making money on this trade. The answer is not China but rather the multinationals." "China Becomes No 3 Trading Nation," Asia Pulse January 12, 2005 (accessed January 15, 2005 on www.taiwansecurity.org.)

2 Morris Goldstein and Nicholas Lardy, Don't hail China's soft landing too soon. Institute for International Economics, October 5, 2004. "A reheated economy," The Economic Global Agenda, January 25, 2005. China has emerged among the top ranks in the production steel and other metals, cement, ships, cars, electronic goods and textiles; and in the consumption of international raw materials.

4 The World Bank and the Asian Development Bank continue to extend loans to China, building on their provision of over US$40 billion in loans to China, though China in recent years has been graduated from receiving loans reserved for the poorest countries. The Japanese aid program has declined to somewhat under US$1 billion of foreign assistance loans annually, and probably will end in a few years "Japan-China," Comparative Connections, January 2005.

Robert Sutter is Visiting Professor of Asian Affairs, at the School of Foreign Service, Georgetown University. Except where other source materials are noted, this assessment is based on Sutter’s most recent book China’s Rise in Asia: Promises and Perils (Rowman and Littlefield, 2005).