Homes of 300 million people are facing threat from rising sea levels across the world, more than three times the previous estimate of 80 million, according to a study published in Nature Communications. The risk assessment was revised after a more sophisticated method applied artificial intelligence to compensate for overestimation of land altitudes. The biggest change in estimates occurs in Asia. “The numbers at risk of an annual flood by 2050 increased more than eightfold in Bangladesh, sevenfold in India, twelvefold in Thailand and threefold in China,” reports Jonathan Watts for the Guardian. Indonesia is already planning to relocate the capital city from Jakarta. The study’s authors warn that risk of underestimation remains because countries may not meet current assumed emission cuts under the Paris agreement on climate change. In the worst case scenario, there could be 640 million people threatened by 2100. Given the revised estimates, the need for coastal defenses is much greater than scientists and communities once thought. – YaleGlobal

Read the article from the Guardian about new estimates of the impact of rising seas. 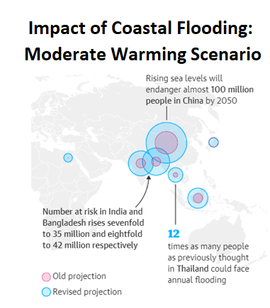