Russia and China Together Again, Gingerly

Beginning August 18, China and Russia embarked on an unprecedented military collaboration: an eight-day joint war game, named "Peace Mission 2005." Though officials of the two countries claimed the drills were for "anti-terrorist" goals, writes scholar Yu Bin, the exercises were "certainly oversized and of overkill capacity for any anti-terrorist operation." Though both sides denied that the drills were directed toward a third party, the United States and several of its East Asian allies responded with their own military exercises – on a far larger scale. So what was the unspoken agenda for the Sino-Russian "Peace Mission"? Yu suggests that, for one, both countries have expressed growing discontent with US activities near their borders. Due to the complexity of their respective relationships with other countries, however, unequivocal military cooperation seems unlikely. In fact, Russia may have participated simply to increase arms sales to China. "With both dependent on the US and the West for their economic well-being," concludes Yu, "their military relations can only remain an auxiliary tool in their toolbox." – YaleGlobal

Russia and China Together Again, Gingerly

Though unhappy with some US policies, both need the West
Yu Bin
Tuesday, September 6, 2005 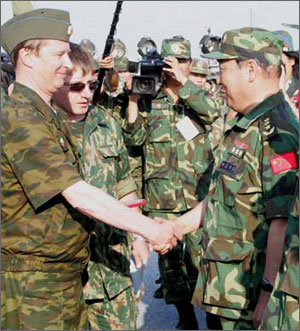 Nice to meet you, I suppose: Russian Defense Minister Sergei Ivanov (left) shakes hands with General Ge Zhenfeng, general director of the Chinese side of the exercise, in China's Shandong Province. (Photo: Xinhua)

SPRINGFIELD, Ohio: For the first time since the former Soviet Union and China fought a border war in 1969, their armed forces are meeting face to face – not in anger, but rather to conduct land and sea military exercises. The collaboration, called "Peace Mission 2005," demonstrates the significant change in the East Asian geo-strategic situation, which has allowed the erstwhile enemies to come together. Still, there are clear limits for China and Russia in shaping their current "strategic partnership" into a military bloc.

Starting in late August at Russia's Pacific outpost of Vladivostok, the unprecedented war games witnessed 9,000 Russian and Chinese troops conducting an eight-day, three-stage exercise along China's northeastern coastline, which was not seen even in the Sino-Soviet "honeymoon" in the 1950s.

On the record, the joint drill was for SCO's "anti-terrorist" goals, an all-purpose and convenient cover for almost all state activities in the post-9/11 world. The actual components of the Sino-Russian exercises – beach landing, parachuting, blockades at sea, dropping depth charges, firing anti-ship missiles from submarines, precision guided bombing from strategic bombers – however, were certainly oversized and of overkill capacity for any anti-terrorist operation. The drill's locations were far removed from the land-locked Central Asia, where the Moscow-Beijing dominated Shanghai Cooperation Organization (SCO) exercises its jurisdiction. While some Chinese commentators suggested that the terrain of the exercise areas were similar to Taiwan's coast, the Russian media speculated about a joint occupation of North Korea if necessary.

The two continental powers repeatedly stated that their drills did not aim at any third party. Few in the region seemed to believe it. Through diplomatic and military channels, the US and its "littoral" allies had urged Russia and China to reduce the scope of the exercise, or even to cancel it altogether. China and Russia, nonetheless, went ahead with the exercise on August 18. The next day, Secretary of State Condoleezza Rice delivered an unusually sharp comment stating China's military buildup as "outsized for its regional interests."

Meanwhile, the United States and its allies matched the Sino-Russian drill with their own, and much larger, maneuvers. On August 7, the US Pacific Command launched its week-long Joint Air Sea Exercise 2005 in Okinawa and Guam. The year's largest joint exercise outside the US, the drills involved more than 10,000 troops, more than 100 warplanes, and the USS Kitty Hawk carrier strike group. On August 22, South Korea and the United States kicked off a 12-day "Ulchi Focus Lens 2005" exercise, drawing 10,000 American and an undisclosed number of South Korean troops. Just one day before the Sino-Russian exercise, Taiwan staged a "routine" exercise to "repel" a simulated invasion by the Mainland. Also, the United States and Japan have scheduled the first-ever island defense exercise – code-named "Yama Sakura" – for early 2006.

In broader terms, the Russian-Chinese exercise was part of a more outward looking Sino-Russian strategic partnership. The annual summit in Moscow in late June issued the Joint Declaration on the International Order in the 21st Century, calling for adherence to international law and principles, a major role of the UN, multilateralism, equal dialogue, development, and a new security framework for the world.

These high principles for a desirable world order reflected genuine concerns in the post-9/11 world: the ever assertive foreign/defense policies of the Bush administration despite the bloodiest "peace" in Iraq; a steadily growing Japanese military power; the precarious Korean nuclear standoff; an almost unstoppable arms race across the Taiwan Strait; and a deluge of "color" revolutions across the former Soviet states. The US-Japan "2+2" conference, held on February 19, was seen as moving beyond its original goal of defending Japan to cover the situation across the Taiwan Strait and the Korean Peninsula.

These developments, past and present, have converged at a time when both continental states have traveled far away from their communist legacies.

Aside from the long-term constraints in relations with the US, Russia and China's post-9/11 "honeymoon" with the Bush administration seems over. Although both nations continue to publicly echo the US anti-terror policy, they are concerned more about the US "hard" and "soft" activities around their peripheries. In a concrete move, the SCO's annual summit meeting in July went as far as to call the US to set a timetable for closing its bases in SCO member states.

In bilateral terms, the joint exercise was in many respects an outcome of a much expanded military-to-military relationship, which, ironically, has been rather lopsided toward confidence-building and Russian arms sales to China. The two militaries actually do not share much in terms of operating principles and military doctrines. Nor do they have any idea how their multi-service and high-tech units and weapon platforms would communicate, let alone coordinate, with one another. Indeed, officers and men of the two sides are more proficient in English than in one anothers' languages. The months leading to the drill also witnessed the sides bargaining for the format, scale, components, locations, and sequences of the exercise. In contrast, the maneuvers between the US and its Asian allies are far more integrated. The US dominance in the alliance relations, too, ensures operational efficiency of those drills.

Beneath the publicized highly positive statements from both sides for the first ever exercise were the not-so-overlapping goals. Beijing is obsessed with Taiwan. Russian Defense Minister Ivanov, however, publicly stated that the exercise did not mean Russia "is prepared to be involved in joint combat operations with China." If the "weapons-but-no-war" is Moscow's bottom line, it makes sense this time for Russia to offer only "sufficient" forces (1,800 vs. China's 7,000) and certain carefully chosen weapons systems. "We are not putting up everything we have for sale," said a high-ranking source in the Russian Defense Ministry. "The main thing is not to damage one's own security." The choice of involving Tupolev-series strategic bombers in the drill was to turn these aging platforms into some profit rather than scrapping them. Meanwhile, Russia's newer models never showed up. It remains to be seen how this will be reciprocated by the Chinese Air Force, whose quest for air superiority and ground support in future operations against Taiwan will likely be served by hundreds of Sukhoi-series heavy fighter/bombers.

Even with the "best-ever" military relations, Moscow and Beijing still need to deal with disappointing trade and societal relations. Last year, US-China trade was eight times greater than Sino-Russia trade (US$170 billion versus US$21 billion). Further, both societies seem more geared to the West than to each other. In the far eastern areas of Russia, distrust and dislike of anything Chinese seem permanent – despite the fact that their 4,300-kilometer border has, for the first time in history, become a non-problem.

Ultimately, the Russian-Chinese drill is expected to serve a much larger politico-strategic goal of maintaining stability in Northeast Asia. In pursuing this goal, the two sides continue to engage diplomatically and politically through bilateral and multilateral interfaces such as the Six-Party Talks on the Korean nuclear crisis. With both dependent on the US and the West for their economic well-being, their military relations can only remain an auxiliary tool in their toolbox.

Yu Bin is a professor of political science at Wittenberg University in the US, Senior Research Associate for the Shanghai Institute of American Studies, and currently visiting scholar at the American Study Center of Fudan University in Shanghai. He is also a regular contributor to Comparative Connections, Pacific Forum, CSIS on Sino-Russian relations. He can be reached at byu@wittenberg.edu.