Greater openness in tourism and trade, on which much of Asia's recent economic growth has been based, is coming back to haunt countries from South Korea to Thailand. The extent of the economic fall-out from the Sars epidemic is only just becoming apparent, but WHO estimates already place the global costs at $30 billion and rising. With China's true infection numbers still unknown and new cases still popping up, investors, tourists, and laborers are now all staying home out of fear that they might contract or spread the mysterious illness. - YaleGlobal 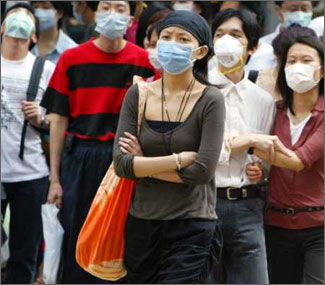 SINGAPORE: Asia is reeling from the spread of the Severe Acute Respiratory Syndrome (Sars) virus and the respiratory illness it causes. The rising caseload of victims and deaths is being accompanied by widespread panic and uncertainty, undermining economic growth and prompting citizens and investors alike to question the effectiveness of government, especially in China and Hong Kong.

East Asia's export-oriented growth in recent years, with China's increasing openness and turbo-charged economic expansion at its heart, has been based on the forces of globalization. Now these same forces - including extensive trade, business travel, and tourism across national borders that are difficult to block for disease prevention - have come back to haunt the region.

Under intense international and regional pressure to reveal the dimensions of the crisis in China, the authorities in Beijing on April 20 took the highly unusual step of admitting that cases of Sars were many times higher than previously reported. At the same time, China's health minister and the mayor of Beijing were sacked.

On April 21, China reported the presence of the pneumonia-like illness in three more provinces, intensifying foreign concerns about disease control in the world's most populous nation and Asia's fastest growing major economy. On the same day, a World Health Organizaion (WHO) team began a four-day investigation into the extent of the Sars outbreak in Shanghai, a major commercial and financial hub and center for foreign investment. Shanghai had officially confirmed just two Sars cases as of April 18 - a figure likely to prove far from complete, as it has in Beijing.

The Chinese government's "evasive and tardy response to the challenge of the Sars virus reflects very poorly on China's international standing, undermines its economic prospects and bodes ill for combating other infectious diseases," said Bates Gill, a China specialist at the Center for Strategic and International Studies in Washington. "This was not the hoped-for auspicious beginning for the newly-installed fourth generation of Chinese leadership and its widely touted goal of 'building a well-off society'."

Until recently, China failed to cooperate fully with the WHO to try to stem the Sars outbreak. Many Asians who had previously looked to Beijing for political as well as economic leadership now blame China for contributing to the spread of the disease.

Chinese credibility on Sars was first questioned in February and March as it became evident that the virus had mushroomed in Guangdong Province, adjacent to Hong Kong. Sars cases were first observed in the province last November. Medical researchers believe that Sars originated in Guangdong, probably mutating from an animal to a human virus, thus becoming more difficult for the human immune system to cope with.

Some economists now say that Sars could be the biggest challenge China's manufacturing sector has faced since the violent suppression of pro-democracy movement in 1989 prompted investors to shy away from the Chinese market. For the past decade, the Pearl River Delta in Guangdong has been one of the mainsprings of China's growth, churning out US$110 billion in annual exports and drawing in $17 billion in foreign direct investment, mainly from Asia and the United States.

The big worry is that if Sars spreads in China, and in nearby East Asian economies, global manufacturing supply chains, banking and trade will start to be affected. Business travel to Sars-affected countries has already been halted by many multinational companies and financial institutions. Many expatriates and their families in places such as Hong Kong have been told by their employers that they cannot go abroad until the Sars scare abates.

"Sars has brought tourism, travel, entertainment and other service activities such as retailing to a virtual standstill in this once-resilient region," said Stephen Roach, chief economist of Morgan Stanley.

Tourism alone represents some 3-4% of GDP in Asia, and Chinese tourists have accounted for an increasingly larger portion of the activity in recent years. "With the Chinese now reluctant to travel - not just overseas but also at home - and with Asian countries restricting the entry of visitors from affected areas, the Sars effect could easily escalate," Roach added.

From Guangdong, travelers took the disease to Vietnam, Hong Kong, Singapore and other countries in Asia, the Americas and Europe, as well as to different parts of China. On April 1, the WHO reported that 1,700 people had been infected with Sars worldwide and 61 had died; by last weekend, barely three weeks later, the global caseload had more than doubled, to 3,871, with 203 deaths.

Although the disease has spread to at least 26 countries, the three worst-affected by Sars are in Asia: China, with 1,807 confirmed cases and 79 deaths; Hong Kong 1,380 (88 deaths); and Singapore 178 (88). Vietnam reported 63 cases and five deaths; Taiwan 27 and three deaths. There is no sign that numbers will peak and decline any time soon.

So far, only about 4% of Sars-infected people die and most appear to make a full recovery within 10 days or so from falling ill. The virus that causes Sars has been identified and its genome sequenced by scientists. As a result, doctors now have a reliable means of distinguishing Sars from influenza-type illnesses while researchers seeking to develop a preventive vaccine have an accurate road map. But because the disease still appears mysterious and no specific treatment or vaccine is yet available, people fear it could turn into a pandemic.

The longer the crisis lasts, the greater will be the damage to Asia's economies. The latest issue of the weekly Far Eastern Economic Review magazine estimates that the cost of Sars in Asia, in terms of slower than previously expected economic growth, is nearly $11 billion and rising.

Others put the loss higher. Andy Xie, a managing director at Morgan Stanley in Hong Kong, estimates that Sars will this year shave 0.6% off real GDP growth for Asia (minus Japan, Australia and India) at a cost of $15 billion. The WHO, meanwhile, estimates that the global cost of Sars so far is close to $30 billion.

Factor in public health outreach efforts, quarantining thousands of confirmed and suspected Sars cases, patient screening and health education, coupled with the impact the new and frightening disease has already had on travel and retail industries and consumer confidence, and the final bill could be much higher.

Because of Sars, governments and private analysts have recently started cutting their economic growth estimates for this year. For example, ING Financial Markets lowered its GDP forecasts for 2003 for several leading East Asian economies. Hong Kong was downgraded to 1.5%, from 2.5%, Singapore from 3.5% to 2%, Malaysia from 5% to 4%, and Thailand from 4.5% to 4.3%.

"Sars appears to be a more serious threat to regional growth than the US-Iraq war," said Tim Condon, ING Financial Markets' chief economist. "The highly tourist-dependent economies of Hong Kong, Malaysia and Thailand will be the most exposed to damage from Sars; South Korea, the Philippines and Taiwan the least affected."

As demand for air travel slumped because of fears of Sars and the Iraq war, some leading Asian carriers cut their flights sharply. Cathay Pacific Airways, based in Hong Kong, is asking employees to clear their annual vacation and take unpaid leave in what is seen as a prelude to extensive job cuts if the downturn continues.

Entry bans by countries like Malaysia have left an estimated 20,000 Vietnamese laborers who were going to work in the labor-short Malaysian economy stranded at home. Taiwan is now requiring health certificates and quarantine-on-arrival for up to 15 days for Vietnamese laborers, while South Korea has closed its doors altogether to Sars-infected countries. Some Southeast Asian countries, such as Indonesia and the Philippines, have stopped sending their workers to hard-hit Sars countries.

In Singapore, officials said that with the onset of the Sars crisis only 62,500 air travelers arrived in the first week of April, less than half the number from a year earlier. Retail sales dropped by as much as 50% in the same period. Normally, Singapore's 35,000 hotel rooms are about 70% full in April. Sars has cut that rate to about 20% and, in some luxury hotels, to less than 10%.

"This crisis is not just a crisis of Sars, it is also a crisis of fear - people fear catching Sars," said Singapore's Prime Minister Goh Chok Tong when he announced at the weekend that the government planned to impose more sweeping and tougher measures to contain Sars and prevent it from spreading.

© Copyright 2003 Yale Center for the Study of Globalization.