When SARS was first reported by China to the World Health Organization last February, the world was little prepared for the consequences that were to follow from that pneumonia-like disease. We are only now beginning to understand the toll the disease took on individuals as well as entire economies and societies. Dr. Michael Merson, dean of Yale University's School of Public Health, says that globalization facilitated both the spread and the containment of the SARS-causing coronavirus, with transportation improvements allowing people to spread the disease rapidly but also with technologies to facilitate intense and rapid communication between health care professionals seeking to control it. With another outbreak seen as likely to occur sometime in the next few months, Merson calls upon policy makers worldwide to commit more money, personnel, and other resources to strengthening public health infrastructure. "The current challenge," he believes, "is to learn from the past and harness the positive forces of globalization to minimize the impact of future outbreaks." - YaleGlobal 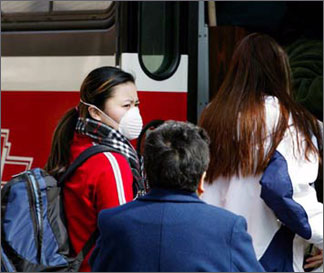 Toronto during the last SARS epidemic. Next time will it be a just a nuisance or another crisis? (CP Photo/Kevin Frayer)

NEW HAVEN: "Life," Aabye Kierkegaard observed, "must be lived forward, but it can only be understood backward." Understanding the implications of last year's SARS outbreak is certainly one such task for our life ahead. As winter approaches and a seasonal renewal of upper-respiratory infections such as SARS threatens, policy makers around the world must look to the past to observe the successes and learn the lessons of last year's outbreak.

Though the first cases of SARS occurred in China's Guangdong Province last November, the first official report on SARS was not made to World Health Organization (WHO) until February 11, 2003. This delay contributed to the rapid spread of SARS around the world, primarily through air travel. The forces of globalization both drove the spread of SARS and are the key to its successful control. Modern travel and labor migration patterns helped spread the disease, and global links amplified its political and economic impact. Simultaneously, modern communication and science alerted the world to the disease and facilitated a strong public health response.

By mid-March, the WHO had issued the first-ever global alert and a strong emergency travel advisory to help curb the global spread. These efforts were largely successful and most countries were able to forestall further transmissions and limit the number of new cases. Nevertheless, by August 7, twenty-nine countries had reported 8,422 probable cases to WHO.

These numbers are indeed frightening, especially occurring within such a brief period. Yet fear spread faster than the virus itself. The fact that the disease was previously unknown, affected many otherwise healthy individuals (including health workers), was potentially fatal, and was spreading rapidly clearly contributed to this fear. To this end, the media played an integral, if double-edged role.

On the one hand, the media's hyper-focus on the virus informed the world and inspired immense international cooperation on research and implementation of control measures such as quarantine and isolation. Whereas it took two years to discover that HIV caused AIDS, it took a mere month of international collaboration to discover the new corona virus that caused SARS and swiftly complete the genetic sequencing of the pathogen. 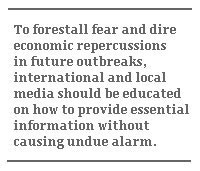 On the other hand, the media's coverage exaggerated public fear, feeding the growing stigma attached to the illness. Chinatowns were deserted, recovering SARS patients were turned down for jobs, and universities made it difficult for Asian students to attend commencement ceremonies. The economic impact was immense, particularly affecting tourism and related sectors and costing as much as $150 billion worldwide. To forestall fear and dire economic repercussions in future outbreaks, international and local media should be educated on how to balance their reporting so as to provide essential information without causing undue alarm.

The media is only one of many elements of the international response that must be examined. Many even question how much the international response headed by the WHO and the Centers for Disease Control (CDC) was responsible for containing the virus. These critics argue that it is equally possible that the number of cases diminished because the virus was following a seasonal pattern, not unlike that of influenza.

In all likelihood, both seasonal effects and the public health response played an integral role in containing SARS. The WHO's public, activist stance incited a rapid response from countries like Vietnam which quickly curtailed the virus's spread.

Similarly, the CDC worked closely with airlines, immigration agencies, and airport authorities in this country and around the world to establish an excellent surveillance system. Using a high sensitive case definition, so as not to miss any cases, states reported 418 probable cases to the CDC, almost all of which were acquired overseas and only 8 were laboratory-confirmed. Moreover, none of these cases resulted in death or transmission.

This global response displayed the value of international cooperation, in a world where this is far from the norm. The WHO used a virtual network of 11 leading laboratories connected by a shared website and daily teleconferences to identify the SARS coronavirus. The organization also utilized its Global Outbreak and Alert Response network to establish investigative teams in many countries.

The cooperation and innovation evidenced in these measures should be modeled in the world's response to future outbreaks. If nothing else, SARS has shown the world that domestic and global health policy can no longer be divided because local health problems can have global repercussions.

SARS thus imparted a fundamental reality: health is a global public good. (See "SARS: Wake-Up Call for a Strong Global Health Policy") To acclimate to this fact, the world must revamp the archaic international health regulations. Currently, governments are required to report only cholera, plague, and yellow fever to the WHO. This protocol must be changed so that the WHO has the right and latitude to gather information, ensure transparency, and assist countries facing public health emergencies like SARS. Making such changes will require international cooperation, financial resources, incentives to governments to encourage compliance, and confidence in the WHO.

In addition, countries must improve their domestic capacities and responses. Hospital practices, procedures, and facilities used to deal with communicable disease must be improved. More experts in epidemiology and surveillance should be trained and reference laboratories should be strengthened. The discovery of effective treatment for SARS or - better yet - a vaccine to prevent it would be ideal. But in the meantime, laboratories should be provided with standardized reagents for rapid, accurate diagnostic tests. Such standardized tests will prevent chaos and confusion in hospitals should a recurrence of SARS coincide with a major influenza pandemic.

Unfortunately, such changes are expensive and compelling governments to implement them may prove difficult. It is therefore important that the economic impact of the first year of SARS be more precisely determined to convince officials that it is more cost effective to invest in preparedness and report health issues promptly to the WHO than it is to deal with a serious pandemic.

Whether there will be an outbreak of SARS this winter still remains to be seen. However, there has already been a case reported in Singapore that was laboratory-acquired.

The US National Intelligence Council recently constructed three possible scenarios for this winter. The first is that SARS will simmer and randomly resurface in a few countries, rendering it more of a public health nuisance than a crisis. The second is that SARS could also potentially gain a foothold in the poor countries of Africa and Asia, causing more deaths than last year, but having relatively little economic impact. The third and most-dreaded scenario is a full resurgence of SARS in all the places it hit before, but particularly in well-connected places like the US, Japan, Europe, India, and Brazil. The world will be fortunate if the simmering scenario proves true, but should be prepared for a combination of the second and third scenarios.

The current challenge is to learn from the past and harness the positive forces of globalization to minimize the impact of future outbreaks. As Julie Gerberding, the CDC Director recently wrote in the New England Journal of Medicine, "If we are extremely lucky, the epidemic will be curtailed, develop a seasonal pattern that will improve prospects for regional containment, or evolve more slowly than it has in its earlier stages. If the virus moves faster than our scientific communications and control capacities, we could be in for a long difficult race. In either case, the race is on, the stakes are high, and the outcome cannot be predicted."

Michael Merson is dean of the Yale School of Public Health. This is adapted from his remarks made at a recent conference at Yale University: “SARS: Globalization’s Newest Challenge.”