As the economic consequences of Sars become more and more apparent, countries are scrambling for solutions. However, argues Ilona Kickbusch, Professor of Global Health at Yale University's School of Public Health, individual nation-states are unequipped to manage something like Sars by themselves. In an interconnected world, we must acknowledge the truly global nature of public health, and nation-states must commit to full cooperation if a disease like Sars is to be contained. In the past, international treaties and organizations have arisen and evolved as countries tried to cope with similar outbreaks, but these groups - like the current World Health Organization - have been plagued by lack of funding and enforcement measures. Kickbusch sees the current crisis as a chance to strengthen the global public health system and offers some specific recommendations for what needs to be done. - YaleGlobal 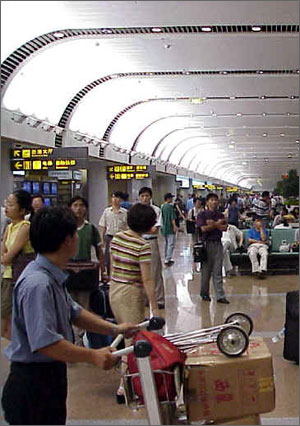 Many books have been written and conferences held on the subject of global public goods. The worldwide consternation caused by the mysterious disease Sars may finally have given a concrete example of how to understand the term and apply health policies based on a global public goods approach. This new realization might prove to be the wake up call that we need to move towards a strengthening of international institutions to ensure health security of all. Why? Because already now - just a few weeks after its identification - the World Health Organization is calculating that the global cost of the disease is close to US$30 billion. That is roughly the amount the WHO has calculated to be the annual donor spending necessary to significantly reduce the global infectious disease burden in the poorest nations.

Sars is not just another disease of the poor - it has hit the vulnerable epicenters of global commerce. The television pictures we see are not of poor babies dying but of middle class Asian citizens and Toronto health workers wearing face masks while going about their daily life. The global concern with Sars at the interface of health and trade is very similar to the situation that led to the first attempts to introduce international agreements on health in the period of rapid globalization in the mid 19th century - an interconnected world faced with major disease outbreaks, in particular large cholera epidemics. Historically, since the 14th century countries have responded to disease outbreaks with a cordon sanitaire, basically a detention of entry for 40 days - enforced by quarantine and even military force. In the new age of expansion this approach was increasingly seen as a hindrance to the rapid growth in trade. Merchants and investors wanted to see responsible government action that contained the spread of disease and made the expensive quarantines unnecessary or raised barriers in the name of infectious disease control.

The First International Sanitary Conference in 1851 ended with a convention dealing with cholera, yellow fever and the plague but was not ratified by all countries concerned due to national interest outweighing international commitment. Yet health diplomacy continued and in 1874 the Fourth International Sanitary Conference in Vienna proposed to create a permanent body, the International Commission on Epidemics which then led to the establishment in 1909 of the L'Office Internationale d'Hygiene Publique in Paris. While the organizations have changed - the Paris Office was followed by the Health Section of the League of Nations in 1920 and the World Health Organization in 1948 - the premise for international health cooperation is still a narrowly construed nation-state model. In this, the "great powers" would ensure their priority areas for action and maintain a financing model based on global charity. This is evidenced by the fact that throughout the last 150 years none of the international health organizations were given real power to intervene and all have been severely under-funded.

With Sars - as in the days of quarantine and the great cholera epidemics - it is the harsh impact on trade and commerce (tourism, banking, the airline industries, the restaurant and service industries, educational institutions, and many more) that could become the driving force for change. Sars shows that simple divisions between domestic and global health policy do not work any more and that transparency is essential in global health matters. Just as many of the determinants of health are now beyond the control of nation states conversely the action or inaction of a sovereign nation-state can endanger the health of the global community. Countries - small and large - will need to pool both sovereignty and resources based on a new mindset; they will need to acknowledge that while health is a national responsibility, it is also a global public good. No state can go it alone in matters of global health. As a global community, we need to stop focusing on the reactive mode that fights disease by disease and outbreak by outbreak. We need to ensure the international legal framework for such a fight and develop sustainable financing of global surveillance, rapid global response and local capacity. This response is as much political as it is technical.

1. To urgently revise the international health regulations (IHR) based on a global public goods model. This means giving the WHO the right and the latitude to gather information, ensure transparency, establish protocols in the case of outbreaks, and to help countries in establishing systems that allow them to fulfill their IHR obligations. Precious time was wasted by the initial Chinese refusal to allow the WHO team to visit Guangdong province, where Sars emerged, or visit military hospitals in Beijing where Sars patients were hidden. It means not only expanding the list of notifiable diseases but also requiring countries to report on the epidemiological characteristics of different syndromes, such as acute respiratory diseases like Sars

2. To explore sanctions by the UN Security Council, the WTO and the IMF for countries that do not adhere to global health transparency and their obligations under the IHR and, conversely, to develop an incentive system for countries who act as responsible global citizens

3. To revisit - within the WTO - the principles and the application of international trade law in view of disease threats so that countries are not penalized for the wrong reasons or subject to "excessive measures" from other states, and to ensure rules for the application of intellectual property laws in cases of global health emergencies

4. To provide sustainable financing to expand the multi-actor global surveillance and rapid response network built by the WHO. Indeed, global surveillance emerges as the number one priority and most important strategy in all surveys of global disease threats.

5. To systematically establish local surveillance and laboratory capacity in developing countries as a joint priority program between WHO and the World Bank

It is the immense economic burden of Sars that could be the tipping point for action and responsibility. It can no longer be accepted that countries do not share health information. It can no longer be accepted that the industries who rely on global disease control do not contribute directly to the financing of global health security. It can no longer be accepted that nation-states keep the World Health Organization on a meager regular budget of US$800 million a year, less than it takes to run an average hospital in the United States. It would only seem reasonable to suggest that those industries most dependent on global health security develop a voluntary mechanism to help ensure it. For example, the travel and tourism industry could establish and contribute to a special WHO Fund for global health surveillance and rapid response. As some health experts have suggested, just one dollar on every airline ticket would ensure about US$ 500 million per annum to help build a sound and reliable global health capacity.1

Above all, it can no longer be accepted that we as citizens think that this is not our problem and it will go away. After Cholera in Peru in 1991, plague in India in 1994, Ebola in Zaire in 1995, Rift Valley Fever in 1998, not to mention BSE (mad cow disease), drug resistant tuberculosis, HIV/AIDS and a series of other outbreaks, it is now time that we signal to our politicians that we expect them to take the next step and establish reliable global agreement on responsibilities, rules and regulations and above all, finance. The United States, with its stellar institutions such as the Centers for Disease Control (CDC), is the world's leader in surveillance and outbreak research. It should also be at the forefront of establishing a new global health agreement. Sars has illustrated it clearly: investing in health as a global public good is the best policy to ensure domestic health.

Ilona Kickbusch is Professor of Global Health at the Yale University School of Public Health.