Sea of Troubles: The New Republic

Conflict, a changing climate, famine and poverty destroy communities throughout the Middle East and Africa, driving thousands of people of all ages to risk crossing the Mediterranean to reach Europe’s safety. Authorities have documented more than 18,000 deaths in the Mediterranean since the start of 2014. Worries about unchecked immigration have boosted far-right populism, and Europe’s leaders block migrant routes while funding patrols and substandard camps in northern Africa. NGO rescue crews can face denial to enter ports, criminal charges, fines, attacks and seizure of ships. Author Ben Ehrenreich joined a crew operated by the German nonprofit Sea-Eye during the summer and describes the experiences of rescuing 109 migrants. “[T]he Mediterranean is now the deadliest border on Earth, a boundary between two worlds, one guarded for the rich, the other suffered by the poor,” he writes. “Its waters hide not only the bodies of thousands of missing migrants, but also the suffering they are running from: the torture camps and slave auctions of Libya, an entire economy of monetized pain subsidized by the European Union in the name of the rule of law. This is a story of that sea, and of what happens far from land when no one else is watching.” – YaleGlobal

Sea of Troubles: The New Republic

Read the article from the New Republic about the crew experiences aboard one vessel rescuing migrants attempting to cross the Mediterranean.

Ben Ehrenreich’s next book, Desert Notebooks: A Roadmap for the End of Time, will be published in summer of 2020 by Counterpoint Press. 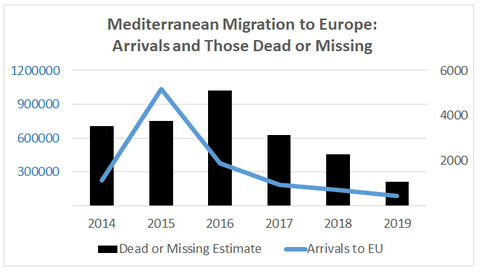 Seeking security: About 82 percent of Mediterranean migrants to Europe in 2019 came by sea, and activists assume that the numbers of migrants who die or go missing during such journeys could be much higher (Source: UNHCR.org)