In Search of Common Sense

Globalization and an unchecked quest for economic growth have rapidly changed the world. Growing numbers of people expect a standard of living substantially higher than what the earth has capacity to provide. Humans increasingly confront problems global in scope, yet the world lacks a cohesive form of governance that efficiently addresses issues that surpass national boundaries. The world could benefit from new frameworks for international negotiations, as well as new or changed institutions for global governance, argues Bo Ekman, chairman of the Tällberg Foundation. Based in Sweden, the foundation is set to embark on organizing worldwide debate on global governance and research on best practices for managing problems that today’s systems can no longer handle. By presenting the Nobel Prize for Peace to the UN Intergovernmental Panel on Climate Change and Al Gore, the Swedish committee has helped to bring new focus on global warming. Some critics suggest that climate change has little to do with peace. Ekman argues otherwise, pointing out how the world offers few frontiers for mass migration by people seeking to escape poverty, war or effects of climate change that endanger human security. To ensure peace, global citizens have a responsibility to respect the environment and conduct business in ways that don’t harm others. – YaleGlobal

In Search of Common Sense 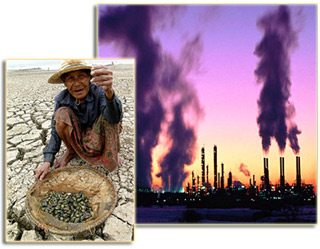 The price of growth: As carbon emissions and greenhouse gases raise the earth's temperature, those who scrounge the earth for a living suffer Enlarge image

STOCKHOLM: The process of globalization has transpired for ages, but during the past century its development grew exponentially, paced by population explosion, technological revolution and economic hyper-growth. However, as people, economies, societies, cultures, production systems are increasingly more intertwined, we find ourselves without effective political mechanisms to create solutions for the whole. While the new problems do not recognize any national boundaries, every nation has sovereign power over its own territory and to pursue its own interests.

The initial objective is to develop recommendations for the long-term viability of humanity’s relationship with nature. We will use well-tested planning methods used by the most successful companies to develop strategies and structures for global operations: advanced planning in their long-term development; experiments and prototypes; research and product development combined with risk analyses.

Such planning is missing in the international systems of negotiations that should guarantee welfare and security for all. Responses today emerge based upon the capriciousness of spontaneous crises that erupt from changes in the balance of power. This is not a well-reasoned approach.

Environmental and climate issues are themselves, by definition, systems problems. No one nation can solve the climate problem; no one nation controls the solution to “its” water problem.

Unfortunately, the world now relies on a system that thrives on economic growth. To question the idea of growth is a modern taboo. That growth should have limits is not in our time a politically or economically acceptable perspective, but environmental crises and climate change would say otherwise. Current trends of growth destabilize our future.

The political rhetoric of the day is that continued high global economic growth is compatible with avoiding the effects of climate change. This has not been proved. Our lack of knowledge is our greatest risk.

All serious research demonstrates that our one planet does not suffice to meet the growth ambitions of everyone in the current technological infrastructure. 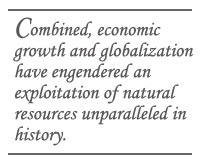 No one technology, no one policy, no one set of values or single nation, can restore or guarantee the future of the environment, security and livelihoods for all the people of the Earth. China cannot do it, nor can the US or the EU.

Perhaps least likely to do it is the United Nations. The American invasion of Iraq clearly demonstrated that the institution does not have the authority to limit a superpower’s ambition to maximize its own interests.

But all parties must be part of the process toward political agreement that can lead the way toward development that is truly sustainable.

The new reality born of globalization is “the territory of the whole.” It is a commons. Yet today we lack political debate about how to organize our global society.

Instead, distrust among nations and groupings of nations has grown steadily for many years within multilateral organizations, particularly the UN and WTO – with conflicts between poor and rich nations, between the North and South, East and West, between various religions, ethnic and cultural spheres.

There is also a sense of mistrust and resignation in the international system over the ever-increasing gap between expressed promises, agreements in force and results delivered. A plethora of examples can be found among environmental issues. Despite more than 500 international treaties now in force, it is a scientifically established fact that the sustainability of Earth’s ecosystems continues to be undermined.

The combination of economic growth and globalization has engendered an intensification and exploitation of natural resources unparalleled in history. The technological infrastructure – primarily energy production – is not compatible with the growth that 6.6 billion people see as their vision of the future. The problem is that too many in too short a time strive after too high a material standard of living relative to the planet’s capacity for delivery. We are caught between our own material ambitions and the Earth’s supportive capacity. That is our dilemma.

Economic growth and thus the accompanying exploitation of natural resources must not take place under any circumstance at unacceptable levels. “Business as Usual” is, with today’s knowledge, not an alternative. We must discover new formulas for politics, economy and business models: “Business as Sustainable.”

Today’s private and public insurance systems are designed to accommodate the risk landscapes of the past century, not those of the future.

Water is but one example of a resource with alarming imbalances throughout the world. In northwestern Europe, parts of North America and South America, water is plentiful. However, in large areas of Africa, the Middle East, Pakistan, India, China and western and southwestern US, water is approaching critical levels.

The shortages are greatest in the most densely populated areas. Today, 1.2 billion people do not have access to safe freshwater, and 15 percent of Earth’s rivers do not reach the sea. In areas of China, the situation is acute. Groundwater levels are sinking in many regions of the world. Global warming will hasten this process as will changes in rainfall patterns. Of all the water on Earth barely 2.5 percent is freshwater, and of this amount less than 1 percent is directly accessible to humans and animals in lakes, rivers, reservoirs and aquifers.

It is not altogether unlikely that we will be forced to exploit Greenland, for example, to meet the growing human need for freshwater.

The struggle for natural resources will harden geopolitical tensions, with resulting military conflicts and terror. The conflicts will appear first over access to freshwater in the Middle East, Africa and Asia.

In our time there are no longer new worlds to which millions could once emigrate. In the worst case, a drawn-out fight for survival awaits us, as the international systems of economy, finances and logistics erode.

Efforts are underway to develop new forums to manage globally shared issues, including the G8 summits, the European Union and the African Union, the Asean grouping, along with many international agreements and conventions.

Management of immense global-systems issues is too often fragmented, handled from the perspective of solitary nations’ relative economic and military strength. In this age of globalization, the world needs new principles and models to meet the fast-growing mutual dependencies. 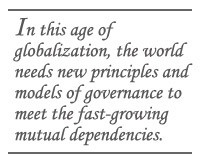 The Tällberg Forum 2008 will pursue new systems for sustainable and secure development upon which humanity ought to agree. The Tällberg Foundation will organize a series of workshops in seven national capitals in cooperation with diverse partners. The full potential of the Internet will be explored for debate, with a goal that the process will develop global public opinion that does not stem from individual political, national or economic interests.

The project will be a “test track” for new prototypes that will manage the problems that yesterday’s models no longer can manage.

One Swedish tradition might serve as a model: Allemansrätten literally means “Everyone’s Right” or “Common Right.” Not a law, it is a centuries-old principled practice protected by the Swedish Constitution: Everyone shall have the right of access to nature. You may go anywhere as long as you heed the common sense of freedom and responsibility concisely expressed in the phrase, "Do not disturb, do not destroy.”