Security and Prosperity in the 21st Century

Former US President Bill Clinton believes that an interdependent world is unsustainable because of its instability. To solve this latent instability Clinton proposes three goals. First, the world needs to create a global community with shared responsibilities, benefits, and values. Second, to implement this global community, nations must share the burden of international security and build institutions that allow for the peaceful resolution of disagreements. Furthermore, the benefits of the developed world must be shared through greater trade liberalization. Finally, the US should foster greater multi-lateral ties, but act alone if necessary. Fundamentally, he concludes, for the US to lead in the creation of an integrated global community, it must first establish an integrated domestic community. -YaleGlobal

Security and Prosperity in the 21st Century

'Cooperate with others whenever we can and act alone only if we have to'
William J. Clinton
Monday, November 10, 2003 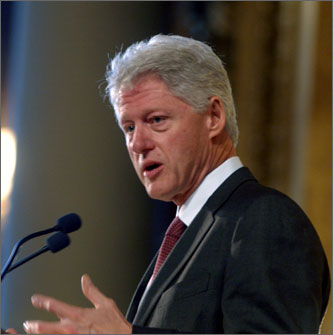 NEW HAVEN: Most people today refer to the time in which we live as the age of globalization. For most Americans, the age of globalization has brought enormous benefits. In the eight years when I served as the president, roughly one third of our growth came from trade. Our country's enormous increase in productivity was in no small part fueled by the application of information technology across all sectors of the economy, the continued outreach to people throughout the world and the openness of our borders to new immigrants from all over the world who continued to replenish the energy of our entrepreneurial system. It worked for us. But interdependence is not, by definition, good or bad. It can be either good or bad, and it can be both.

On September 11, 2001, Al Qaeda terrorists used the forces of interdependence - open borders, easy travel, easy immigration, easy access to information and technology - to turn a jet airplane full of fuel into a weapon of mass destruction, killing 3,100 people in the United States, including hundreds of people from 70 foreign countries who were in America looking for positive interdependence. Over 200 people they killed were Muslims, indicating the racial and religious diversity of the positive side of this equation.

My basic premise is this: the interdependent world, for all of its promise, is inevitably unsustainable, because it is unstable. We cannot continue to live in a world where we grow more and more interdependent, and we have no over-arching system to have the positive elements of interdependence outweigh the negative ones.

So I believe all thinking people must ask and answer three questions for themselves, particularly if you are in this country. One, what is your vision of the 21st century world? Two, what do we have to do to achieve it? And three, what does America have to do?

As to the first question, I think the great mission of the 21st century world is to make it a genuine global community. To move from mere interdependence to integration, to a community that has three characteristics: shared responsibilities, shared benefits, and shared values.

On the second question - how would you go about building that kind of world? With regard to shared responsibilities, I think the most important are to fight for security against terror, weapons of mass destruction, organized crime, and narco-traffickers; to take shared responsibility for breaking up Al Qaeda and terrorist networks, for re-starting the Middle East peace process; for resolving the nuclear issues and the missile issues of North Korea; for encouraging the new dialogue between the two nuclear powers, India and Pakistan; for making post-war Iraq a successful transition to a democratic self-government; for helping other countries fight terror, like Colombia and the Philippines, and for having a global effort to reduce the stocks of available chemical, biological and nuclear materials. The second main shared responsibility is to build institutions of global cooperation across a wide range of areas, so people get into a habit of resolving their differences in a peaceful way, according to rules and procedures that are generally perceived to be fair to everyone. Unless you have institution building, it will be hard to sustain the mentality necessary to have shared responsibilities.

We also have to share the benefits of the interdependent world. Why? For one thing, if you come from a wealthy country with open borders, unless you seriously believe you can kill, imprison, or occupy all of your enemies, you have to make a world with more friends and fewer enemies, with more partners and fewer terrorists.

As we see everyday in Iraq, the United States military is the only super military in the world. We can win any military conflict all by ourselves but we can't build the peace all by ourselves. So what does that mean? Among other things, it means that we have to bring economic opportunity to the 50 percent of the globe's population that lives on $2 a day or less. It means more trade with developing nations. It means more aid that works properly. It means another round of debt relief tied to economic development, education, health care. It means funding projects that will build successful, functioning, sustainable economies in poor countries across the globe. It means educating the world's people who presently can't be part of positive interdependence.

I was at the United Nations yesterday talking to the Secretary-General about the work I'm doing to fight AIDS in Africa and the Caribbean. We are now going to be able to buy medicine for under $140 per person per year, but we need to fund the poor countries to develop the health care networks to make the medicine work. This is not rocket science, but every time we do it we build a world with more friends and fewer terrorists. I'm all for a strong security position, but we cannot possibly kill, imprison or occupy all of our actual or potential adversaries, and we are drastically under-investing in building a world with more partners and fewer terrorists.

On the third question - what is America's responsibility? My philosophy is that the U.S should cooperate with others whenever we can across the broadest range of areas and act alone only if we have to. In the current government, the conservatives believe they should act alone whenever they can and cooperate only when they have to. For example, take those of us in the cooperation camp who were fairly hawkish on Iraq. I was for the UN resolution last November that said to Saddam Hussein: 'you will let the inspectors back in, or we will depose you.' Where I fell off the wagon was when we moved from 'cooperation whenever we can and act alone when we're forced to,' to 'now we've got the UN, and we will decide when Hans Blix is through with his inspections.' The UN inspector was pleading for four, five, or six more weeks to finish, but the people who wanted the conflict didn't want him to finish and didn't want to let him finish.

I still believe that we ought to see if the UN can take over security, ask NATO to handle it, and involve countries that opposed the military conflict but who are part of NATO. If they came in, it would prove that we were all trying to build a multi-party, multi-ethnic, and multi-tribal democracy in Iraq. But most of the problems we have today are ill-suited to unilateral action.

Finally, let me say just one other thing. I believe that fundamentalism - the sense that you have the certain truth and the entitlement to impose it others - is not well-suited to solving the problems of the modern world in either religion or politics. It is far better to deal with these problems based on evidence and argument with a willingness to experiment. If you're driven by ideology, you're going to make mistakes. The world is full of hard questions without easy answers. Not everyone who disagrees with you is your enemy.

The opposition to globalization in the world is rooted in people who feel left out, left behind, and stepped on by other countries. If you, like me, believe in expanded trade and believe America has greater obligations to open our borders and to invest more in the development of poor countries, we have got to maintain the political support here in America for doing that. And the only way we can do that is to keep making our economy function better, make our society more united. We have to build an integrated community in America, too. Otherwise we won't have the political support here to do what we need to do around the world.

William J. Clinton was the 42nd president of the United States of America. This is adapted from a speech he delivered at Yale University on October 31, 2003, at the invitation of the Yale Center for the Study of Globalization.