Security Measures May Not be Sand in the Wheels of Commerce

Seaports have been described as America's most vulnerable entry-point. Everyday, ships from around the world dock in American harbors and unload a vast array of cargo. Most inbound crates contain products from trusted trade partners. However, since September 11, concern has grown that the crates entering these under-regulated gateways could hold chemical, biological, or even nuclear weapons. In order to patch this gaping hole in border security, the US government has initiated new policies designed to monitor US bound merchandise. The number of inspectors at foreign ports has been significantly increased and the US has started to require that traders and carriers electronically submit detailed descriptions of their cargo to customs officials prior to arriving in American ports. This new requirement is creating a global chain reaction, not only affecting US domestic carriers, but influencing EU policies and creating upheaval with some Asian ports authorities as they struggle to update their technology. But despite initial concerns about delays and costs, these new measures are not slowing the flow of trade. Rather, they are securing and streamlining global commerce, to the benefit of traders and citizens worldwide. - YaleGlobal

Security Measures May Not be Sand in the Wheels of Commerce

Initial costs could be followed by a boost in efficiency of global trade
William Mougayar
Tuesday, August 19, 2003 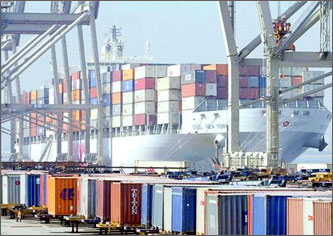 TORONTO: In the wake of September 11, the US government has been under intense domestic pressure to step up security on its vast borders. Aside from stricter visa regulations and monitoring at airports, authorities have also been closely scrutinizing what has been called America's most vulnerable entry point - its seaports.

Realizing that gaping holes in port security could allow all sorts of biological, chemical, or even nuclear weapons into 'the homeland', the US has worked to expand traditional forms of seaport security and will soon send 170 inspectors to over 20 new foreign ports. More importantly, it will also begin utilizing modern technology to efficiently report on the quantity and type of cargo entering the US by ship. These new American standards may facilitate the flow of goods across borders rather than be a drag on economic growth that many predicted. Keeping an eye on the changing rules and their own bottom lines, US trade partners are attempting to bring their security practices in line with the new regulations.

The US policy that initiated this global chain reaction of commercial security policies is the 24-Hour Advance Vessel Manifest Rule, a part of the US's newly launched program called Customs Trade Partnership Against Terrorism (C-TPAT). The new policy requires that carriers electronically submit, in advance, detailed cargo descriptions to the US Customs Automated Manifest System.

International ports like Durban, Bangkok, and Antwerp have so far complied with the US-initiated procedures. Major US trade partners are well aware that another terrorist attack would be disastrous to the entire world economy. Moreover, cooperation secures the flow of trade via their ports and allows them to reap the benefits of elevating their operations to a new standard in global security and efficiency.

Buoyed by this worldwide cooperation, the US government is now turning its attention to domestic carriers. It will begin enforcing the latest amendment to the Trade Act of 2002 by asking that the Customs and Border Protection agency receive information pertaining to cargo before it is exported by US companies, whether by sea, air, rail, or truck.

The US's post September 11 interest in re-engineering transport security is spawning similar policies around the world. Indeed, in an unexpected move, motivated in part by existing bilateral agreements with eight EU countries, the European Commission has proposed that all of Europe replicate the US's new rule. The EU will ask traders to account for the contents of their containers a day before leaving EU ports and require US exporters to provide detailed information about their cargo. Though primarily a response to the US program, this proposal will coordinate EU customs activities and standardize risk assessment procedures for screening goods at ports and airports.

Thankfully, meeting these security requirements will not be as costly as expected. Shortly after 9-11, Fortune magazine suggested $65 billion as the bill for logistics related expenses, including transportation and inventory storage. However, these estimates did not consider that security procedures would further lubricate trade by forcing transport carriers to automate their supply chains, raising the level of customs information.

In the US, the use of EDI (electronic data interchange) and Web technologies to transfer data will cost large air carriers an estimated $5,000 to $25,000, plus $6,000 a year in maintenance costs, according to the Bureau of Customs and Border Protection. Smaller carriers will have a cheaper alternative when they contract with a service provider. And some smaller regional carriers will be permitted to fax their cargo manifests. These initial costs will doubtlessly be passed on to customers or shippers. However, newly adopted technologies will speed-up the flow of information and streamline the flow of goods. Only high risk containers will be subject to delays, thus reducing the need for random inspections and the number of costly unexpected delays.

Even express carriers see benefits in connecting their islands of information. Responding to the new US legislation, DHL Worldwide Express Inc., which already files electronically many of its customs documents, is in the midst of implementing a Worldwide Clearance System designed to standardize and centralize its customs processes. DHL expects to boost productivity by up to 35 percent over the next five years.

Internationally, the costs of implementing the initiative will also be balanced by a more streamlined system. Foreign ports wishing to trade with the US are required to buy the specified screening and detection equipment to facilitate US inspectors in the identification of high-risk containers. In return, the time spent processing cargo upon arrival in the United States will be substantially reduced.

Traders that fail to comply will face costly and grave consequences. Penalties for non-compliance with C-TPAT range from US$5,000 for the first violation, and US $10,000 for subsequent violations, to a complete ban on unloading goods at the US port destination. In addition, ports that aren't highly automated will lag in compliance and become disadvantaged as a choice for US-bound cargo.

However, avoiding penalties is not the only incentive for traders to comply. Faster processing will mean lower costs of inventory in transit, a key measure of supply chain efficiency. Even saving one day of transit per month could mean a few million dollars in savings for a large multi-national company.

There are also some not-so-glamorous benefits to these US-led initiatives. Forcing electronic efficiency as a de-facto standard exposes weak areas that must be urgently dealt with. For example, Hong Kong, a world-class transportation hub, has surprisingly found itself lagging on compliance with the C-TPAT because it has been slow to upgrade its information technology systems. To reduce inefficiencies and close the digital gap, the Hong Kong Logistics and Development Council has launched one of its most ambitious projects - the Digital Trade and Transportation Network (DTTN) - a multi-million dollar venture aimed at delivering electronic compliance in less than a year's time.

In Thailand, although the US's new regulations are already making some carriers add an additional cost of US$40 per bill of lading and freight forwarders charge another $25 per shipment, the new requirements will curb existing corruption tactics of falsifying goods identification and customs clarification that greatly undermine efficiency.

The US-based regulations are gaining even another level of international support and backing. Inspired by these US initiatives, the International Maritime Organization recently amended its 1974 Safety Convention to include the new International Ship and Port Facility Security Code, to be enforced starting July 2004. The code was signed by 104 countries and will suggest that ships and port facilities more closely monitor the access and activities of people and cargo and begin ensuring secure communications.

And at the G8 level, the "Cooperative G8 Action on Transport Security," a relic from the 2002 meeting, was re-adopted at the recent Evian summit. The G8 even took credit for the expansion of the Container Security Initiative to seven G8 countries, saying they had long supported "pilot projects that model an integrated security regime."

Thus, what appeared originally as a set of extra procedures and expenses designed to secure only US-bound cargo is beginning to look like a global effort to secure and streamline international trade, promising to yield benefits far greater than the costs incurred. Indeed, with the right combination of technology, new processes, and international agreements, post-September 11 transport rules could prove a boon to global trade.

William Mougayar is a management consultant and the author of the book, Opening Digital Markets.