Early in 2003, New York Times columnist Thomas L. Friedman applied a rule common in retail pottery stores, “You break it, you own it,” to the then-impending invasion in Iraq. The succinct analogy warned that the US and other invading nations would bear responsibility for rebuilding Iraq. More than four years later, political and social institutions throughout the Middle East are in ruins, with millions of young Muslims and Arabs growing up in desperate poverty – the targets of extremist groups who seek power. Author and analyst Fawaz Gerges points to three major fault lines: a growing divide between the rich and poor parts of the Arab population; growing dissatisfaction with the ruling elite and the Shia-Sunni sectarian divide. Any of the three could trigger region-wide chaos any day. The Bush administration, with 19 months left in office, has lost credibility in the region, amid violence raging in Iraq, refugee populations expanding in numerous countries daily, pro-Western authoritarian regimes cracking down on reform-minded secular progressives and Muslims all over expressing outrage about long delays in addressing the central Israeli-Palestinian conflict. Still, the US cannot escape responsibility of the pottery rule – for restoring stability to the troubled yet vital region. The entire world awaits signals from all serious candidates for US president on specific, realistic plans for the Middle East. It’s a long shot, but unwavering attention and talk of strategies, on the scale of a Marshall Plan, could ease conflict in the region. – YaleGlobal

Invasion, poverty and instability deepen institutional crisis throughout the region – with no fix in sight
Fawaz A. Gerges
Tuesday, June 12, 2007 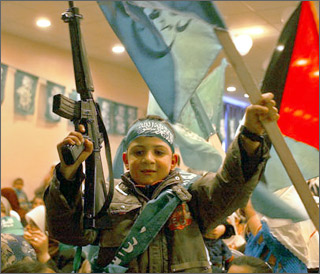 SANA’A, YEMEN: Marking 40 years of Israeli occupation, Palestinian President Mahmoud Abbas warned that his people are on the verge of civil war. Infighting between Islamist Hamas and nationalist Fatah is worse than living under Israeli military rule, stated Abbas. Similarly, Lebanon faces grave crises, pitting the pro-Western ruling coalition against Hezbollah-led opposition, the Lebanese army against Al Qaeda-inspired factions like Fatah al-Islam and Jund al-Sham. The nation is also a battlefield with a fierce struggle waged between the US and its allies on the one hand, Iran and Syria on the other.

The Middle East is boiling, and not just in Palestine, Lebanon and Iraq. What official Washington views as “clarifying moments” are deepening institutional crises shaking the foundations of Middle Eastern societies. I focus on three pivotal fault lines: 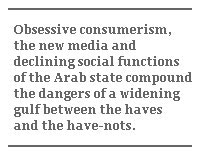 The first is the widening socioeconomic divide between a tiny elite and critical segments of the Arab population. On average, up to 40 percent of the Arab population lives below the poverty line. In poverty belts surrounding Arab cities, from Egypt to Sudan, millions of young Muslims struggle to subsist, with no stake whatsoever in the existing order. Several developments make this widening socioeconomic gulf between the haves and the have-nots dangerous: obsessive consumerism, the new media that reach into every corner of the Arab and Muslim world, and the declining social functions of the Arab state.

Militancy migrates into these poverty belts. Since its inception in the mid-1970s, the jihadist or militant Islamist current has basically been elitist. Some of the brightest, most educated young Arab and Muslim men led the jihadist current from its inception until the mid-1990s. Their ideology now spreads into urban poverty belts throughout the region. Recent suicide bombings in Morocco and Algeria are a case in point.

The dominant wisdom in the US is that the Arab state system is durable, that it has withstood various shocks. But how long can the forced durability last? Social revolutions are unlikely at this historic juncture, but a tiny incident – a riot over a soccer game, a protest against human-rights violations by security services or a hunger protest – could precipitate chaos.

I hope I’m wrong, but I’d not be surprised to wake up one day and see entire posh neighborhoods in Arab and Muslim cities on fire, reflecting a reservoir of accumulated grievances collecting in the region.

A second related fault line revolves around the increasing legitimacy gap between the Arab ruling elite and the population. The vacuum of legitimate political authority has never been so wide, exacerbated by the dismal economic performance of the Arab state and widespread perception that the Arab rulers are subservient to American foreign policy.

A consensus exists, outside the ruling circles, that the status quo is no longer viable. Moderate voices call for civil disobedience. Radical and nationalist Islamists call for open revolt. The paradox is that the opposition is fragmented.

It’s little wonder that mainstream Islamists represent the only viable alternative to the relatively secular authoritarian order. The fragmentation of social and political opposition groups has created a bipolarity, one in which mainstream Islamists, particularly the Muslim Brotherhood, are the major challenge to the status quo. In almost every

Arab society, mainstream Islamists – as opposed to radical and militant Islamists – have emerged as the leading social and political force.

Liberals hold the pro-Western Arab regimes responsible for creating this dichotomy as a result of closed political systems and crackdowns on progressive, secular elements.

While governments succeed in silencing progressive voices, they have failed to do so with the Islamists. The Islamists possess their own resources including mosques, schools and social infrastructure. In a way, Muslim rulers enabled mainstream Islamists to become the only viable political alternative. In Imbaba, one of the poorest neighborhoods in Egypt, a poor Egyptian said: "Listen, suppose my son gets ill at two in the morning. He’s dying. Who do I call? Who is there?” He counts on the Muslim Brotherhood to send a doctor to his house in the middle of the night. “Who do you want me to vote for,” he asked, “the government or the Muslim Brotherhood?”

In the last 50 years, authoritarianism and ideological immobilization have sapped the strength of Arab citizens, estranging them from the political process. They are fed up with the elite, both the opposition and the ruling elite, who promised heaven and delivered dust.

Sadly, mainstream Islamists have provided neither vision nor initiative to build a broad alliance of social forces and transform the political space. They arm themselves with vacuous slogans like “Islam is the solution.”

A third, more recent fault line is the Shia-Sunni divide. Even in traditionally non-sectarian societies like Egypt, Yemen and Jordan, the divide resonates. In interviews, some radical Islamists have told me that the Shia represent a more existential threat to the Sunnis than the Americans do. “America can never infiltrate the social fabric of Sunni societies, while the Shia can," they said. 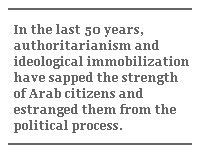 Although the Shia-Sunni divide is more political and ideological than religious, the spillover from the Iraq War threatens social harmony from Lebanon to Syria to the Gulf. Unfortunately, US strategy in Iraq has widened the gulf between Shia Iran and Sunni-dominated states in Egypt, Saudi Arabia, Kuwait and Jordan, indirectly sowing the seeds for a transnational sectarian battle. Pro-Western Arab regimes manipulate the divide to stem the Iranian tide in the Arab arena.

The dominant narrative in this volatile region pins the blame for deepening fault lines on America. Time and again, I am told that Westernization and globalization, US support for Israel and authoritarian Muslim regimes, coupled with America’s war in Iraq and Afghanistan, are the sources of the ills besetting Muslim societies. Few recognize the gravity of the internal institutional crisis shaking Arab societies to their very foundation. Pinning the blame on imperial America is the easy way out.

It’s futile to talk about what the Bush administration can do to prevent the region’s escalation of hostilities. We can only await the next administration, one that begins the process of extracting US forces from Iraq's shifting sands and trying to resolve the region’s simmering conflicts, particularly the Palestinian-Israeli conflict. The coming administration, along with the international community, must develop a new Marshall Plan to help Arabs rejuvenate their collapsed economies and institutions. A superpower like the US with vital interests in the region cannot afford to remain idle. The major foreign-policy challenge facing US presidential candidates is coming to terms with the complexity of the region’s troubles – and crafting strategic approaches for Iraq and the region as a whole. 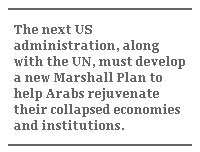 My conversations with a broad spectrum of the public and civil-society leaders convinced me that, without pressure from the international community, Arab and Muslim regimes will resist reform. Since the invasion of Iraq and subsequent devastation, Muslims have no serious regard for the Bush administration’s rhetoric on democracy, widely perceiving it as a ploy to subjugate the Muslim world. Now liberals say to the Bush administration, "Please leave us alone. You’ve done a great deal of damage to our democratic agenda."

Based on public surveys, democracy does not rank high for Arabs. Bread-and-butter issues top their concerns. Democracy is a luxury when economic survival is at stake.

That does not mean Arabs do not welcome democracy. Rather the rhetoric of democracy means little unless translated into concrete actions, such as helping to build a productive social base and a universal commitment to the rule of law and human rights, reducing tensions by resolving festering regional conflicts.

Fawaz A. Gerges, who holds the Christian Johnson Chair in Middle East and International Affairs at Sarah Lawrence University, New York, is author of the recently published “Journey of the Jihadist: Inside Muslim Militancy,” recently published by Harcourt Press. Gerges is currently a Carnegie Scholar and visiting professor at the American University in Cairo.