A Setback for Democracy

Before the US-led invasion of Iraq, states throughout the Middle East had been loosening some controls, particularly in the economic and communication spheres. Increasing internet use and lively broadcasts from Aljazeera satellite TV gradually encouraged economic and political debate. But increasing debate did not automatically lead to representative government or elections. As chaos reigns in Iraq, authoritarian Arab regimes use the failure there to resist any further movement toward democracy. Author Dilip Hiro explains that the ongoing violence in Iraq bears all the signs of a low-intensity civil war, exposing ethnic and sectarian fault lines once controlled by the harsh rule of Saddam Hussein. Iraq could break up along ethnic lines, and authoritarian leaders and Arab analysts warn that other nations throughout the Middle East could also be susceptible to such ethnic divisions. Because of the ongoing conflict in Iraq, Arabs who advocate for democracy in the Middle East endure new challenges along with questions about their patriotism. – YaleGlobal

A Setback for Democracy 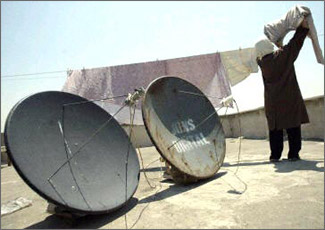 LONDON: An elected Iraqi government is about to take office in Baghdad – the first since the brief democratic experiment that began with direct multiparty parliamentary elections in 1953 and ended with the 1958 anti-royalist military coup. Yet, despite Washington’s belated justification for overthrowing Saddam Hussein as a victory for democracy, why is there no sign of joyous celebration among Arabs aspiring for democratic rule? The sad answer is that most Arab intellectuals view the evolution of this elected government in Iraq as giving a bad name to democracy and setting back the cause.

It is true that a consensus among observers of the Arab world holds that over the past decade or so there has been some movement toward liberalization in the region. The advance – more marked in the economic and informational fields than in politics – is unrelated to the US invasion and occupation of Iraq. Instead, there is growing opinion to the contrary, that authoritarian and semi-authoritarian Arab regimes are using Washington’s faltering project to resist political reform.

Like the rest of the world, Arab countries have been affected by the economic globalization movement that gathered momentum with the collapse of the Soviet Union in 1991 and the transformation of the General Agreement on Tariffs and Trade (GATT) into the World Trade Organization (WTO) in January 1995 under the tutelage of powerful Western economies. Globalization has loosened the grip that the dictatorial and semi-dictatorial Arab states have traditionally maintained over the economy.

Equally, the arrival of the internet and satellite television during the latter half of the 1990s has undermined the monopoly over information that most Arab governments had arrogated for themselves.

The launching of the Doha-based Aljazeera satellite TV with a powerful C-band transponder in 1997, followed by the abolition of censorship by Qatar’s ruler Shaikh Hamad ibn Khalifa al Thani in 1998, broke the long-established mold of state-managed news in the Arab Middle East.

Aljazeera also pioneered no-holds-barred talk shows, one-on-one debates and investigative journalism of the sort not witnessed in the region before or since. The network broke taboos by interviewing Israelis and inviting them to participate in debates, and tackling such controversial issues as the role of religion in politics and the existence or otherwise of God.

At one time or another, almost all of the Arab states have closed down the local Aljazeera bureaus in protest of the editorial policies. Yet audience figures of some 35 million in the Arabic-speaking world have so impressed their governments that they, too, have tried to incorporate some of Aljazeera’s features – one-on-one debates and investigative journalism – to spice up their own output.

Similarly, the information explosion from the early 1990s onward has impacted the Arab world. Internet use has become quite common among middle and upper-middle classes who matter most in politics. And there has been a mushrooming of satellite television channels.

The governments try to control information sources by blocking websites and banning satellite dishes. But those savvy with internet technology invariably find ways to circumvent the barriers. And over time, satellite dishes have become small enough to be mounted indoors.

Yet these laudable technological developments have proved insufficient to prime a vigorous movement for political liberalization, committed to creating a representative government through periodic elections and a choice of political parties.

Perhaps what is missing is a catalyst to transform economic liberalization and the information explosion into a powerful instrument for political reform.

Those who loudly advocated an invasion of Iraq by the US confidently predicted a scenario of democratic Iraq in the post-Saddam Hussein era becoming a beacon of democracy, good government and rule of law for the rest of the Arab world. Three years after the overthrow, the reality is chaos and violence.

Two elections have exposed the sectarian and ethnic fault lines of the Iraqi society that had been masked by the iron hand of the Baath Party and Saddam Hussein.

The Bush administration compounded its ignorance of the culture and history of Iraq with its staggeringly disastrous policy of not just toppling the Saddam Hussein regime, but also smashing the state machinery by letting all the ministries, except oil, be looted and burnt by the mobs and – worse still, instantly disbanding the military, police and intelligence apparatus.

The vacuum, created by the dissolution of the all-pervasive, Sunni-dominated Baath Party and the coercive organs of the state, was quickly filled by the hitherto extensive underground network of the Shiite religious establishment. The militias of the Shiite religious parties followed, including the leading one established in Tehran during the 1980-1988 Iran-Iraq War.

The subsequent elections enabled the Shiite parties to consolidate their positions by securing popular mandates. The same happened in the case of the two main Kurdish parties. Finding themselves marginalized, minority Sunnis – sulking over the loss of power in Iraq after more than 350 years – also opted for parties based on sectarian loyalties.

By now sectarian or ethnic identity has superseded the national identity. Unlike Kurds, ethnically different from Arabs who have traditionally been the inhabitants of the northeastern mountainous region, Sunni and Shiite Arabs have co-habited the Mesopotamian plains since the rise of Islam in the 7th century.

Greater Baghdad, accounting for a quarter of the national population, has been a mosaic of Sunni, Shiite and mixed neighborhoods. Now the mixed Sunni-Shiite districts are turning into single-sect neighborhoods.

The mosques that once attracted both Sunni and Shiite worshippers now no longer do so. There are already Shiite checkpoints and Sunni checkpoints, with many Iraqis equipping themselves with two sets of identity documents, with one of them carrying the name of Omar, detested by Shiites for historical reasons.

For their protection, Shiite Baghdadis turn to the uniformed police or army whose personnel are mostly Shiite. Conversely, their Sunni counterparts call on the local Sunni vigilantes for protection. For all practical purposes, a low-intensity civil war is underway in Iraq.

This state of affairs combined with the recent floating of partitioning Iraq by some American defense experts has provided powerful ammunition to authoritarian Arab regimes resistant to political reform. They warn that the American model of democracy will tear apart national identity and create divisive sectarian and ethnic identities, turning the region into mini-states along the post-Yugoslavia model.

Also helping the authoritarian and semi-authoritarian Arab regimes is the intense anti-Washington sentiment prevalent throughout the Muslim world due to the Bush administration’s invasion of Iraq for reasons that turned out to be false. The regimes have little difficulty in marginalizing the advocates of political liberalization by describing them as allies of the much-hated Bush White House, often branding them as anti-patriotic.

All in all, instead of initiating and aiding a democratic wave in the Arab world, Bush’s invasion of Iraq has inadvertently achieved the opposite result.

Dilip Hiro is the author of “Secrets and Lies: Operation ‘Iraqi Freedom’ and After” and “The Iranian Labyrinth: Journeys Through Theocratic Iran and Its Furies, both published by Nation Books.