Should the US Sell Nuclear Technology to India? – Part II

When US President Bush signed a deal in July with Indian Prime Minister Manmohan Singh allowing India access to civilian nuclear technology, naysayers complained that the administration had undermined the principles of the Non-Proliferation Treaty (NPT), which India has not signed. In the part two of our series, Ashley J. Tellis argues that, such critics fail to see the shrewdness of rewarding India’s record of voluntary non-proliferation with urgently needed civilian nuclear programs, while placing India’s future nuclear development within an international framework. By ensuring that India’s nuclear program enjoys the same benefits and is bound by the same obligations as the other powers in the non-proliferation regime, the US is invoking one of its top national security priorities: the prevention of nuclear commerce between India and a rogue state or non-state actor. Critics point out that other NPT non-signatories, like Pakistan or North Korea, will demand the same recognition and benefits for their nuclear programs that the deal has provided India. Tellis argues that such fears are groundless, since India, a democratic and rapidly developing nuclear power with a good non-proliferation track record outside the NPT, is almost universally acknowledged to be an exception, not the rule. Ultimately, Tellis calls for a global consensus supporting the Bush-Singh agreement, and encourages the critics, within the US Congress itself, to recognize the American national security benefits of bringing India into the recognized nuclear fold. – YaleGlobal

Should the US Sell Nuclear Technology to India? – Part II

The sale would serve both the countries’ national security interest as well as the goal of non-proliferation
Ashley J. Tellis
Thursday, November 10, 2005 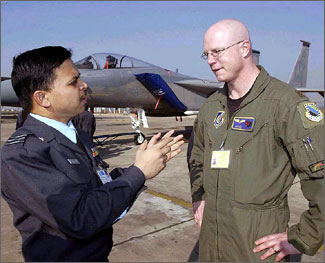 WASHINGTON: The Indo-US bilateral agreement providing New Delhi access to the long-denied civilian nuclear technology has emerged as a contentious issue in the Congress. But it need not be because the deal is good for both countries’ national security interests as well as for preventing nuclear proliferation.

The July 18, 2005 agreement, many critics assert would undermine the global nonproliferation regime and ultimately American security. At the first hearing on this subject on September 8, 2005, Congressman Henry J. Hyde correctly noted that among the critical questions surrounding this agreement was whether its “net impact on our nonproliferation policy is positive or negative.” On October 26, 2005, at the second hearing on this issue, four out of the five witnesses empanelled by the House Committee on International Relations affirmed the conventional wisdom that such a deal weakens nonproliferation rather than strengthening it. 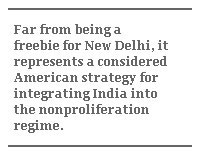 Contrary to these gloomy prognostications, the President’s new agreement with India is actually a bold step that will have the effect of strengthening the nonproliferation order for many decades to come. Far from being a freebie for New Delhi, it represents a considered American strategy for integrating India into the nonproliferation regime, which India has not been part of since the nuclear Non Proliferation Treaty (NPT) was signed in 1968. The NPT was intended to prevent global proliferation by compelling all non-nuclear weapon states to give up their nuclear weapons ambitions as the price for enjoying access to civilian nuclear technology. This trade-off worked for most countries and represents a profound diplomatic accomplishment for which succeeding Republican and Democratic administrations should be credited. For a variety of political and philosophical reasons, however, India chose not to sign the NPT and went on to build both a large civilian nuclear infrastructure and a nuclear weapons stockpile based mainly on indigenous expertise. Thus, the restrictions on nuclear commerce that the United States orchestrated since 1974 progressively lost their relevance as far as India was concerned. In effect, India became an exceptional case regarding nuclear weapons and nonproliferation.

Nevertheless, New Delhi established through this entire period an exemplary record of controlling onward proliferation. . India’s commendable nonproliferation history, however, is owed entirely to sovereign decisions made by its government, not to its adherence to international agreements. As a result, any unilateral change in the Indian government’s policy of strict nonproliferation could pose serious problems for American security. This concern has acquired particular urgency in the post-9/11 era because of the incredibly sophisticated capabilities present in India today and because India remains at the cutting edge of research and development activities in new fuel cycle technologies. Bringing New Delhi into the global nonproliferation regime through a lasting bilateral agreement that defines clearly enforceable benefits and obligations, therefore, not only strengthens American efforts to stem further proliferation but also enhances U.S. national security. 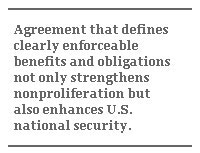 The President’s accord with India advances these objectives in a fair and direct way. It recognizes that it is unreasonable to continue to ask India to bear the burdens of enforcing the global nonproliferation regime in perpetuity, while it suffers stiff and encompassing sanctions from that same regime. So the President proposes to give India access to nuclear fuel, technology, and knowledge in exchange for New Delhi institutionalizing rigorous export controls, placing its civilian reactors under international safeguards, and actively assisting the United States in reducing proliferation worldwide. In other words, he offers India the benefits of peaceful nuclear cooperation in exchange for transforming what is currently a unilateral Indian commitment to nonproliferation into a formally verifiable and permanent international responsibility.

This deal, obviously, does not imply a lessened U.S. commitment to maintain through intense diplomacy in the months and years ahead the vitality of the NPT regime, which remains critical to American national interests. But, it does indicate that extraordinary problems justify extraordinary solutions. The international community has long recognized India’s anomalous position in the NPT framework. Consequently, three out of the five legitimate nuclear weapon states have welcomed the Bush-Singh agreement and even the exception thus far—China—has been silent rather than opposed. Despite this fact, many fear that the agreement could undercut the basic bargain of the NPT and lead several current non-nuclear weapon states to seek those same benefits now offered to India.

This concern must be taken seriously, but it is on balance exaggerated. For starters, there is no international pressure to re-negotiate the NPT from either its nuclear or its non-nuclear signatories. Further, those non-nuclear weapon states that joined the regime and continue to remain members in good standing did so because the treaty emphatically serves their national interests. If anything, these countries should join IAEA Director-General Mohammed El Baradei in applauding the Bush-Singh initiative, because an India that undertakes binding international nonproliferation obligations promotes the security of non-nuclear weapons states as much as it does that of the United States. Not surprisingly, then, many non-nuclear weapon states such as Canada and Australia have endorsed the agreement.

Finally, with regard to worries about other NPT non-signatories demanding similar deals to the one that Bush and Singh have just brokered, it is worth noting that India currently remains the only outlier worthy of such unique treatment. Although India, Pakistan, and Israel have not violated any NPT obligations by developing their nuclear deterrents, New Delhi alone meets the following criteria that justify international cooperation: It has proven mastery over various nuclear fuel cycles, which must now be safeguarded in the global interest. It has an exceptional nonproliferation record, despite having been a target of the international nonproliferation regime. Most importantly, it has enormous energy needs that cannot be satisfied without access to nuclear fuel (and to nuclear power more generally), if it is simultaneously expected to help mitigate the problems of climate change and environmental degradation. 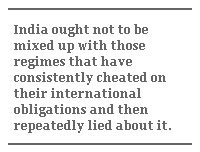 Two other arguments often surface in the debate over proposed U.S.-Indian nuclear cooperation. The first is that it would exacerbate the problems posed by Iran and North Korea. This claim must be decisively rejected since the only thing common to these three cases is the word “nuclear,” nothing more. Iran and North Korea violated their NPT obligations; India did not. This simple fact ensures that whatever the issues relating to accommodating New Delhi may be, they ought not to be mixed up with those of managing regimes that have consistently cheated on their international obligations and then repeatedly lied about it. The second argument contends that the U.S.-Indian agreement will open the door to other nuclear suppliers engaging in reckless transfers of nuclear technology to their own preferred partners. This is possible, but it is not inevitable. A great deal depends on whether the international community will join the United States in viewing India as the only country worthy of special treatment. At present, an emerging agreement on this issue is in the works and the prospects for a consensus are bright because India is a democratic state, has not violated international agreements, and has exhibited responsible custodianship of its nuclear assets. In any event, the administration is committed to working with its international partners to reach closure on this issue and, hence, it ought not to be assumed that the understanding with New Delhi will automatically open doors to other nuclear suppliers engaging in emulative arrangements.

On balance, there are many reasons why Congress should expeditiously support the President’s historic civil nuclear agreement with India. It would be unfortunate if the legislative branch overlooked the fact that strengthening the global nonproliferation regime is clearly one of them.

Ashley J. Tellis is a Senior Associate at the Carnegie Endowment for International Peace and served in the U.S. Department of State as senior advisor to the Ambassador at the Embassy of the United States in India. He is author of “India’s Emerging Nuclear Posture” (RAND, 2001).