European Union member states disagree about the bloc’s enlargement in the Balkans and may add new hurdles to what is already a lengthy membership process. France has proposed changes to the accession process, suggesting that the EU should concentrate on integration for current members rather than external expansion. Proponents of enlargement, including Germany, are distracted by domestic issues while Great Britain struggles to exit the union. The Paris proposal sets out a multistage membership process to ensure economic and democratic integration. France has suspended the launch of accession talks with North Macedonia and tried to block Albania from beginning similar negotiations. Although French officials claim such moves do not close the door on enlargement, candidate countries express disappointment, especially because some countries, including North Macedonia, have been making preparations and policy changes for more than a decade. Delays could destroy motivation, pushing would-be EU members to embrace Russia, China and other nations that seek to increase influence in the region. – YaleGlobal

Read the article from the Wall Street Journal about the European Union revising its membership process, adding to delays for Balkan nations that want to join.

Laurence Norman is the correspondent in Brussels for the Wall Street Journal, covering news related to foreign policy, enlargement and more. Valentina Pop contributed to this article. 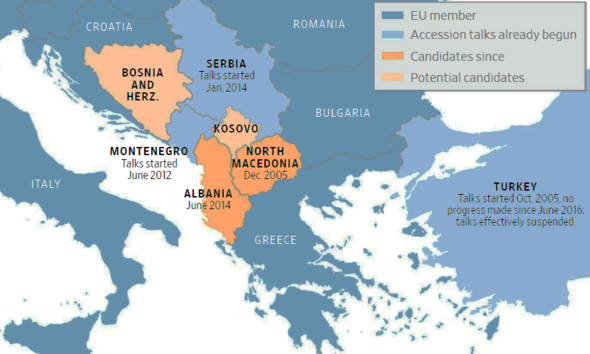 Can Europe Age Gracefully? – Part I

Rid of Violence, a Reforming Bosnia Emerges as a Model

The Pull of the West

Running Out of Reasons to Say "No" to Turkey