“Slumdog Millionaire” is a rag-to-riches love story that has captured the world’s imagination. An orphan growing up in the squalor of Mumbai’s poorest neighborhoods overcomes overwhelming odds that life throws at him, learning in the process much that prepares him to compete in a popular game show and reunite with childhood sweetheart. Even as international audiences cheer the orphan’s goal – not securing wealth or escaping roots, but rather finding a lost love – Indian audiences are less than enthusiastic. The film is a metaphor for a globalized India, explains author Sadanand Dhume, underscoring the promises and pitfalls of international collaboration and the painful fact that though India has come a long way, it still has far to go. A latecomer to globalization, India raced to catch up, embracing technology and education, increasing the ranks of its middleclass and inspiring new successes in literature, film, science and industry. Yet poverty and inequality remain pervasive, with opportunity still limited for many. The international attention that accompanies an appealing film, with universal themes, reveals both the good and the ugly of an India in transition. Denial prolongs the difficulties, while openness inspires change. – YaleGlobal

Every city, every nation, has its riches and flaws – and globalization exposes them all
Sadanand Dhume
Wednesday, February 4, 2009 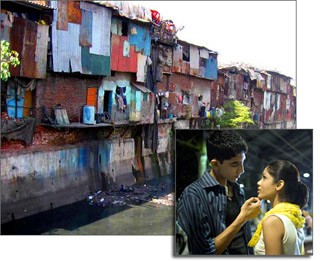 Love in a slum: Dharavi slum in Mumbai and scene (inset) from Slumdog Millionaire

NEW DELHI: The unexpected international success of “Slumdog Millionaire” has pleased some Indians while provoking unusually strong protests from others. The critical and commercial success of the film, contrasted with sharp criticism and a lackluster run in Indian theaters, captures the inherent contradictions of an increasingly globalized country. India basks in the glow of international recognition, but resents the critical scrutiny that global exposure brings.

Not since Sir Richard Attenborough’s “Gandhi” has a film about India captured the world’s imagination as strongly as “Slumdog Millionaire,” director Danny Boyle’s gritty yet uplifting drama about a boy from the slums of Mumbai who makes good as a game-show contestant on the Indian version of “Who Wants to Be a Millionaire.” The low-budget production – which cost $15 million to make, a pittance in Hollywood terms – has garnered both commercial and critical success, grossing $96 million worldwide as of February 1st, and picking up four Golden Globe awards and 10 Oscar nominations. In one among a raft of glowing reviews, Wall Street Journal’s Joe Morgenstern hailed “Slumdog” as “the world’s first globalized masterpiece.” 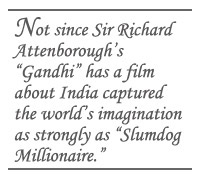 In India, however, the response to the film has been ambivalent. Commercially, it has failed to replicate its American success. Despite a wave of publicity and an ambitious nationwide rollout, “Slumdog” is showing in half-empty theaters. It trails the box-office receipts of an obscure Hindi horror movie released the same day. And though some Indian reviewers praised the film for everything from inspired casting to an improbable Bollywoodish storyline, it also attracted its share of brickbats. On his blog, Bollywood star Amitabh Bachchan struck a populist note: “if SM projects India as [a] third-world, dirty, underbelly developing nation and causes pain and disgust among nationalists and patriots, let it be known that a murky underbelly exists and thrives even in the most developed nations.” The critic Meenakshi Shedde dismissed the film as “a laundry list of India’s miseries.” Interviewed in the Los Angeles Times, film professor Shyamal Sengupta called the film “a white man’s imagined India.”

In many ways, “Slumdog Millionaire” is a metaphor for India in the age of globalization. The director, Danny Boyle, and screenwriter, Simon Beaufoy, are British. The male lead, Dev Patel, who plays the part of the quiz-show contestant Jamal, is a Gujarati whose family migrated to London from Nairobi. His love interest, Latika, is played by Freida Pinto, a Catholic girl from Mumbai, India’s most cosmopolitan city. The novel upon which the film is loosely based, “Q and A,” was written by an Indian diplomat currently stationed in South Africa. The television game show “Who Wants to Be a Millionaire,” which supplies the film’s narrative backbone, is another British creation. Adapted in more than 50 countries, the show is recognizable to audiences from Beijing to Buenos Aires. 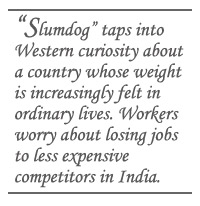 The film’s success also underscores India’s emergence on the world stage. Indeed, the superficial similarities with Ang Lee’s “Crouching Tiger, Hidden Dragon,” the 2001 blockbuster set in Qing dynasty China, are striking. Both films draw on the talents of a widespread diaspora: Michelle Yeoh, Dev Patel. Like “Crouching Tiger,” “Slumdog” taps into Western curiosity about a country whose weight is increasingly felt in ordinary lives. Service workers in the West worry about being “Bangalored,” or losing their jobs to less expensive competitors in India. Credit-card and consumer-appliance users routinely deal with customer-service professionals in Gurgaon or Hyderabad. In America, one no longer has to live in a big city to be familiar with yoga or chicken tikka masala. An Indian company, Tata Motors, owns the iconic automobile brands Jaguar and Land Rover. India-born professionals helm Pepsi and Citibank. Salman Rushdie and Jhumpa Lahiri occupy a similarly exalted place in fiction. To sum up, it seems unlikely that a story set in the slums of Manila or Jakarta would find nearly as large an audience in Boston or Baton Rouge.

For India, one of the most autarkic and culturally inward-looking countries in Asia until the advent of economic reforms in 1991, the benefits of globalization are easily apparent. In purchasing power parity terms, per capita income more than doubled from $1400 in 1991 to $3800 in 2006. The ranks of the middle class, broadly defined, have swelled to more than 250 million people. More Indians buy cell phones each month than any other people. 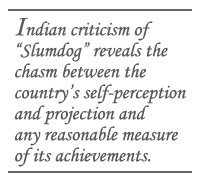 The same story can be told on the corporate and macroeconomic level. Since liberalization, a dozen Indian firms – spanning banking, pharmaceuticals, software and services – have listed on the New York Stock Exchange, and three on the technology-heavy NASDAQ. The United Nations Conference on Trade and Development estimates that a record $36.7 billion of foreign direct investment flowed into India in 2008. Foreign-exchange reserves stand at a robust $250 billion.

There are less tangible changes as well. For generations after independence from Britain in 1947, more or less the only way for an Indian to make a mark on the world stage was to emigrate. A.R. Rahman, the Chennai-based composer of the “Slumdog” soundtrack, has not needed to change the color of his passport to snag a Golden Globe or multiple Oscar nominations. In a broader sense, the same holds true for many of the scientists and engineers who work for General Electric or Microsoft in Bangalore, or for the employees of a clutch of ambitious homegrown pharmaceutical companies with global ambition. India may not quite be center-stage – its contribution to world trade remains a slender 1.5 percent – but neither is it off-stage anymore. If an ambitious government target is met, the country’s share of world trade will more than triple to 5 percent by 2020. 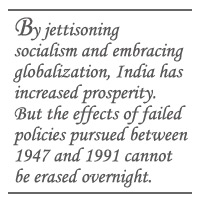 Notwithstanding the giant strides made over the past 18 years, Indian criticism of “Slumdog” also reveals the chasm between the country’s self-perception and projection and any reasonable measure of its achievements. India may boast homegrown programs in space exploration and nuclear power, but – as a first time visitor to India immediately notices and as the film mercilessly reveals – it also struggles to provide its people with electricity, sanitation and drinking water. About half of Indian women are illiterate, a higher percentage than in Laos, Cambodia or Myanmar. It is at number 122 – between Nepal and Lesotho – on the World Bank index that measures ease of doing business, and 85 on the global corruption index maintained by the anti-graft NGO Transparency International. To put it bluntly, the squalor of the slums depicted in “Slumdog” is closer to reality than an elaborately choreographed Bollywood dance sequence shot on location in Switzerland.

To sum up, by jettisoning socialism and embracing globalization India has become more prosperous than at any time in more than six decades of independence. But the effects of failed policies pursued between 1947 and 1991 cannot be erased overnight. As “Slumdog” reveals, India is doing better than ever only when benchmarked against its own dismal past. When compared to the West, or to East Asian countries that have truly transformed themselves – Japan, Taiwan and Korea – the gap between India's rhetoric and its reality remains jarring. “Slumdog” may wound national pride, but the answer is more openness not less. As long as chronic poverty remains a central fact of Indian life, the spotlight that globalization brings will shine on India’s software success as well as on its slums.

Sadanand Dhume is a Washington, DC, based writer and the author of “My Friend the Fanatic: Travels with a Radical Islamist.” His next book will examine the impact of globalization on India.