A Source of Energy Hiding in Plain Sight

Countless dollars in energy from limited fossil fuels are wasted – a result of aging and inefficient factories, homes not being insulated and vehicles manufactured without any regard for conservation. The cost of oil is down now because global demand is down, but energy-importing nations could continue to control prices by conserving more energy, argue professors Marilyn Brown and Benjamin Sovacool in this article for YaleGlobal. The US, which consumes about a quarter of the world’s energy, could lead in smart-energy use, and legislators could promote and innovators could develop and improve alternative fuels. A side benefit is that energy efficiency creates more than twice the number of jobs than traditional plants that rely on fossil fuels or nuclear energy. Widespread recognition about the real costs of energy and conservation tips could both strengthen the economy and protect the environment while providing energy security. – YaleGlobal

A Source of Energy Hiding in Plain Sight

Efficient use of energy would save money and create jobs
Marilyn A. Brown
Wednesday, February 18, 2009 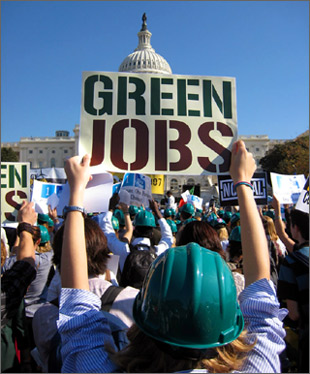 Go Green: Green-energy industries are more labor-intensive than the traditional energy supply industries and the push is on for green jobs

ATLANTA: Imagine an energy resource so revolutionary it could improve energy security, strengthen the economy and protect the environment simultaneously.

This resource is widely abundant in the United States and, according to some studies, offers more potential than any other known resource. It's commercially available, ready to be utilized without the need for subsidies or further research.

It could provide thousands of high-paying jobs and does not need to be drilled, dug or drained out of the earth. It would not melt down in Pennsylvania, spill into the Prince William Sound, spit toxic-sludge into Tennessee rivers, seep contaminants into California’s water supply, create Superfund sites in New Jersey, destroy Appalachian forests or release greenhouse gases into the atmosphere.

It would operate automatically, always “on,” ready to be “dispatched” without delay or intervention by energy providers. Yet it’s existed for years, with multiple time-tested, empirically proven and reliable varieties for use.

This resource is energy efficiency. 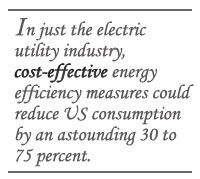 The term does not necessarily mean “doing less” or “suffering without,” but instead what physicist Amory Lovins calls “doing more with less through smarter technologies.” It’s getting more bang for the buck, more economic activity out of less energy – with light bulbs that need less power, weather stripping around doors and windows, hybrid electric vehicles instead of the gas-guzzling behemoths, properly inflated automobile tires, more efficient industrial motors and renewable energy instead of coal and oil.

In just one sector, the electric utility industry, cost-effective energy efficiency measures could reduce national consumption by an astounding 30 to 75 percent. These measures are cheaper to implement than purchasing any form of electricity supply and could save up to three-quarters of the country’s power bill.

Energy efficiency is a centerpiece of President Barack Obama's short-term action plan. His goal of reducing electricity demand 15 percent from projected levels by 2020 is a good start, and should be supported.

Obama has also supported investments in energy efficiency through his just-signed stimulus bill to “jump-start” the economy. More than $45 billion in tax breaks and new spending will go towards alternative energy. Key components include modernizing electricity transmission lines to reduce leakage, doubling the number of wind farms, replacing the federal fleet with more efficient vehicles, and providing financial assistance to low-income families so they can insulate homes and purchase better quality appliances. 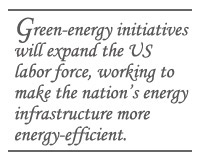 These green energy initiatives will expand the US labor force working to make the nation’s energy infrastructure more energy-efficient, with new jobs for home energy auditors and inspectors, electricians and linesmen, civil and mechanical engineers, and hybrid electric autoworkers and apprentices. The stimulus bill even includes funds to create Job Corps Centers, where workers will be trained for careers in energy efficiency.

One reason these initiatives will produce so many new jobs is because green energy industries are more labor-intensive than the traditional energy supply industries. For instance, utilities providing natural gas and electricity employ up to five jobs for every $1 million of spending. But, sectors vital to energy-efficiency improvements support twice as many – 8 to 13 jobs per $1 million of spending.

While a good start, Obama’s plans do not go far enough.

For example, he hasn't focused on reforming existing laws and policies that place energy efficiency practices and technologies at a comparative disadvantage. Newer, cleaner, more efficient energy technologies face numerous barriers as they compete with incumbent products in the marketplace.

Perhaps the most troubling of these obstacles are those that US legislatures and regulators impose, often as unintended consequences of well-intended policies. Just a few examples:

• The Clean Air Act and its various amendments promote continued operation of some of the country's least efficient power plants. Exempting oldest plants from meeting pollution limits enables continued operation of some of the most polluting generators in the country far beyond their normal life. Pollution controls today are targeted where they’re least needed, artificially inflating the value of the oldest, dirtiest plants.

• Failure of local and regional agencies to control sprawl, the spreading of suburban areas over rural land, has contributed to growth in vehicle traffic and to energy-inefficient urban systems. The federal government redistributes gasoline tax revenues to states and municipalities based on highway use, doing little to boost public-transit alternatives.

• In 2005, the US Department of the Interior’s Minerals Management Service was given oversight for developing rules to regulate coastal siting of wind farms. More than three years later, the agency still has not finalized its site-permitting procedures, and the US still does not have any wind turbines generating electricity in its territorial waters.

• In most states, natural gas and electric utilities face little incentive to promote efficient use of energy by their customers because utility profits are tied to sales. A utility’s rates are typically set based on an estimation of cost of providing services over some period of time, divided by an assumed level of sales over that period. If actual sales are less than projected sales, the utility earns less. Today, profits of most utilities shrink when customers make their homes more efficient by upgrading to Energy Star appliances or generate their own electricity with rooftop solar panels. 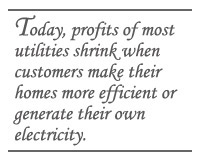 Fixing these problems would not be overly difficult. Clean Air Act exemptions could be eliminated. Federal agencies could design policies to promote public transit and curb suburban sprawl. Electricity sales and profits could be decoupled, and consumers encouraged to use electricity at off-peak hours.

Individuals can also do their part. Homeowners can install geothermal heat pumps, integrate solar panels into roofs and improve the energy efficiency of residences with compact fluorescent light bulbs, appliances, insulation and other devices.

As taxpayers and voters, they can write letters, march, and cast a local, state, or national ballot for those candidates that best promote energy efficiency.

As shareholders, employers, employees and investors, they can support clean-power companies or changes at the workplace.

As citizens, Americans can participate in meetings to discuss the permitting of wind farms and attend state hearings.

To those who scoff at these ideas, consider that more severe actions have been taken to promote energy efficiency at other times and in other places.

After the energy crises of the 1970s, French regulators created the equivalent of an “energy police” to patrol streets at night, issuing fines to people who left lights on or drivers who left cars idling when they ran inside.

In contemporary Beijing, China, a 20-member “energy-saving police team” monitors office buildings, schools and hotels to make sure heating and cooling systems do not exceed government standards – colder than 79 degrees Fahrenheit in the summer or warmer than 68 degrees in the winter.

While these options are extreme, dozens of other countries from Japan to Sweden rely on softer, more effective approaches such as mandates, pricing incentives and educational programs to improve energy efficiency. 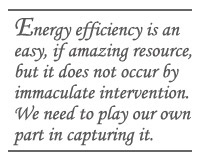 The point is that the country has far more energy efficiency potential than President Obama and his advisors seem to realize. This potential can be harnessed through regulatory changes from the top-down, and further enhanced by simple personal changes from the bottom-up.

Energy efficiency is an easy, if amazing resource, but it does not occur by immaculate intervention. We each need to play our own part in capturing it.

Marilyn A. Brown is professor of energy policy at the Georgia Institute of Technology, as well as a visiting distinguished scientist at the Oak Ridge National Laboratory. Her research interests include energy, innovation and climate policy. Benjamin K. Sovacool is an assistant professor at the Lee Kuan Yew School of Public Policy at the National University Singapore. There, he researches issues relating to energy policy, the environment, and science and technology policy. Click here for a YaleGlobal review of his most recent book, “The Dirty Energy Dilemma: What’s Blocking Clean Power in the United States.”

© 2009 Yale Center for the Study of the Globalization