Still Not Too Late to Prevent a Doomsday

When it comes to the global environment, optimistic views are few and far between. In his new book, Red Sky at Morning, James Gustave Speth, Dean of the Yale School of Forestry and Environmental Studies, tackles the challenges posed by global environmental problems with rare optimism. In this essay adapted from his book, he acknowledges that there is much to be pessimistic about. Although some progress was made on the environmental front, he says, climate change, devastation of natural resources, deforestation, loss of species, and land deterioration have gone largely unchecked by governments in the past two decades. Of late, leaders of many nations, most notably the US, have begun to downgrade a cooperative interstate approach to global environmental concerns. Notwithstanding a possible doomsday scenario for planet Earth, Speth writes that there has never been a more exciting time to work for the good of the global environment. Technology has vastly improved, population growth and poverty have declined, international environmental law has expanded, and there is a new movement of consumers committed to sustainable living. “We are seeing the slow but steady emergence of a global civil society, as like-minded organizations in many countries come together,” writes Speth. This new civic force can be used to apply pressure on governments and corporations to commit to action. - YaleGlobal

Still Not Too Late to Prevent a Doomsday

With an emerging international movement of citizens and scientists, all hope is not lost for saving the environment
James Gustave Speth
Wednesday, March 10, 2004 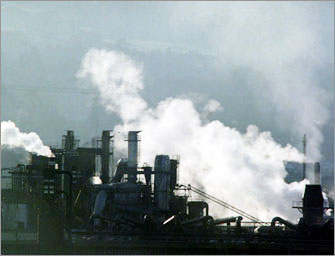 NEW HAVEN: Now that there is a greater awareness of the seriousness of the challenge of global warming and other environmental threats, there is also an emerging sense of helplessness. The task ahead appears too daunting to take on. But it should not. Despite the gravity of our predicament, the situation is far from hopeless. Solutions - including the policy prescriptions and other actions needed to move forward - abound. We need but use them.

It has taken us time to realize that the premier environmental challenges are the global-scale ones. Throughout the 1970s, the US worked exclusively on domestic environmental issues, and we made good progress. So the realization around 1980 that even larger challenges were massing on the global front came as a rude awakening. Climate change, devastation of ocean fisheries, deforestation in the tropics, loss of species, land deterioration, and other unwanted processes were occurring on a frightening scale and pace. We were building a fool's paradise here in America by concentrating on local environmental concerns while ignoring these global-scale ones. 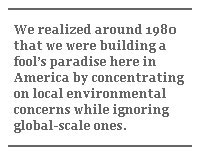 Beginning in the 1980s governments acknowledged these larger issues and the need to address them. Measures were put in place, principally broad treaties framed by the problems (and not aimed at their underlying drivers). The steps that governments took over the past two decades represent the first attempt at global environmental governance. It is an experiment that has largely failed. The disturbing trends that motivated the international community twenty years ago continue today essentially unabated. Thirty six nations lost 10 percent or more of their forest cover in the 1990s. About three-fourths of the world's dry lands are degraded, and about a fourth of all land is degraded to a degree sufficient to reduce its productivity. Water withdrawals climbed six fold in the twentieth century, twice the rate of population growth. Acid rain and smog on a regional scale are damaging plant and animal life over significant areas of the globe. Protection of the ozone layer is the notable exception to this sad conclusion.

In the end, what can reliably be said about the prospect for humans and nature? A pessimist might conclude that the drivers of deterioration are too powerful to counter, that our economy is too dependent on unguided growth and laissez-faire, that our politics cannot accommodate long-term thinking, and that our society responds only to major crises.

Weighed against this, there are hopeful signs and encouraging developments. Scientific understanding is greatly improved. Population growth is slowing, and the proportion of the world's people in poverty is being reduced. Technologies that can bring a vast environmental improvement in manufacturing, energy, transportation, and agriculture are either available or close at hand. We are learning how to harness market forces for sustainability, and major schemes for capping and trading emissions of climate-changing gases are emerging. International environmental law has expanded and is ready for a new phase. Environmental and other civil society organizations have developed remarkable new capacities for leadership and effectiveness. Private businesses, environmental organizations, and local governments the world over are taking impressive initiatives often far ahead of international agreements or other government requirements. The environment is emerging as a force in business strategic planning. Europe, at least, is providing real leadership on the policy front.

Helpful trends outside the environmental arena are becoming discernable. Globalization of many descriptions is eroding sovereignty. We are seeing the slow but steady emergence of a global civil society, as like-minded organizations in many countries come together. In many places, especially in Europe, one can see psychological disinvestment in the nation-state and the strengthening of local and global citizenship. These trends should enhance prospects for international cooperation, both official and unofficial. 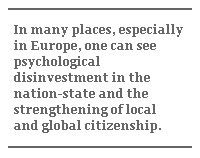 However, one thing is clear: the needed changes will not simply happen. No hidden hand is guiding technology or the economy toward sustainability. The issues on the global environmental agenda are long-term, chronic, and complex, where genuine, farsighted leadership from elected officials is at a premium. But we have not seen this leadership emerge, and we have waited long enough. What we need now is an international movement of citizens and scientists, one capable of dramatically advancing the political and personal actions needed for the transition to sustainability. Environmentalists are often said to be part of "the environmental movement." We need a real one.

Eventually, leaders in the political and business worlds will see that it is in their self-interest to promote the transition to sustainability. But the evidence to date is that, absent some new force in the picture, they will be much too late in coming to this realization. The best hope we have is a coalescing of a wide-array of civic, scientific, environmental, religious, student, and other organizations with enlightened business leaders, concerned families, and engaged communities, networked together, protesting, demanding action and accountability from governments and corporations, and taking steps as consumers and communities to realize sustainability in everyday life.

A new movement of consumers and households committed to sustainable living could drive a world of change. Young people will almost certainly be centrally involved in any movement for real change. They always have been. New dreams are born most easily when the world is seen with fresh eyes and confronted with impertinent questions. The Internet is empowering young people in an unprecedented way - not just by access to information but by access to each other, and to a wider world.

An immediate priority should be to get the United States back into the game with Europe and Japan. In the long run the United States being an outlier is not helping US industry or the US economy. The US is falling behind, for example, in environmental and energy technology - a big business - as well as new approaches to environmental protection - both areas where the United States once had the lead. More fundamentally, the world will not get far in this field without American leadership. Not only is the US a big source of problems (as with climate change), but it is also essential to cooperative solutions (as with reversing resource deterioration in the developing world). The world needs a United States that leads by example and diplomacy, with generosity and compassion.

A phenomenal expansion of economic activity is projected for the decades immediately ahead. Down one path, this growth can protect, regenerate, and restore the environment. It can provide sustainable livelihoods for the world's poor and lead to large improvements in quality of life for all. There is still world enough and time to realize this future. But it will not be won without a profound commitment to urgent action. President John F. Kennedy often told the story of the aged Marshal Lyautey of France debating with his gardener the wisdom of planting a certain tree.

"It will not bloom," the gardener argued, "for decades."

"Then," said the marshal, "plant it this afternoon."

James Gustave Speth, Dean of the Yale School of Forestry and Environmental Studies, served most recently as administrator of the United Nations Development Program. He founded the World Resources Institute and co-founded the Natural Resources Defense Council. This article is adapted from his latest book, “Red Sky at Morning: America and the Crisis of the Global Environment” (Yale University Press, 2004).

YaleGlobal Online © 2004 Yale Center for the Study of Globalization