US healthcare costs are nearly double that of other developed nations, and are without any attendant benefits: US life expectancy is no greater. Hence, the burden to the government and corporations is clear and reform is needed, according to economist David Dapice. That this burden is growing faster than inflation makes the need for a timely solution even more pressing. As uncontroversial as this might be, the healthcare industry argues that lowering spending may harm innovation. Yet it is known that the industry focuses on developing costly new treatments, rather than on prevention. What is less understood is how lowering US health care costs may help the world. In one sense, the US is starving investment in growth by swallowing up so much of the world’s savings. With a lower budget deficit, capital flows that are directed to funding US debt might now go toward developing nations, according to Dapice. In the end, failure to achieve meaningful healthcare reform would mean weaker US companies and a weaker US, an unwelcome trend for the world if no one can fill the vacuum. – YaleGlobal

US healthcare reform can help the world
David Dapice
Tuesday, May 26, 2009 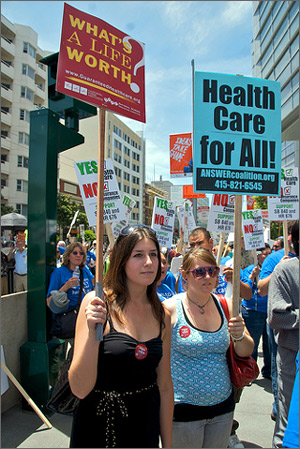 Healthcare for all: Reducing costs while expanding coverage could breathe life into the world economy

MEDFORD: In insurance, a death spiral happens when the cost of insurance goes so high that “regular” people stop buying insurance and only those most likely to claim continue to pay the premiums. That worsens the underwriting experience, so the price of insurance is raised again, and more people drop out and the cycle repeats. This actually happened with some health insurance that gave people the right to use any doctor and get any procedure without outside review. It turns out that people spend a lot when the extra cost of using a service is zero, or seems to be at the time.

What is happening now is bigger. The US is close to a death spiral for companies and the entire US budget due to rising health care costs. Tackling the strangulating health care cost has emerged as a key task of the new US administration and their success and failure would have tremendous consequences not only on the US budget and economic health, but also on the competitiveness of American corporations. 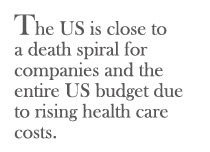 While many are aware that health insurance has become more expensive, the comparative numbers still astonish. Most other rich countries to which the US compares itself spend about $3000 to $4000 per inhabitant, while Americans spend over $7400 in 2007. Recent US life expectancy was 77.4 years compared to 78-81 years in these other countries such as Canada, Australia, the UK, the Netherlands or Sweden. Not only do Americans spend more than twice as much, but the US is rapidly increasing spending as well. In 2007, health care costs rose to 16% of US income compared to 12% in 1990. Per capita US health spending rose from $2700 to over $7400 in that period. While the reasons for this cost explosion are debated, it appears that one major reason is that few people pay the full cost of health care directly. With little effective cost management from insurance companies or government, industry focuses on costly new treatments while cheaper preventative strategies get short shrift. Projections are for health costs to double as a share of GDP by 2035. In short, private companies are literally going broke providing health care and the US budget will also face extreme pressures from these rising costs. General Motors has argued that health care costs add about $1400 more per vehicle than foreign transplant factories, in part because their work force is older and GM’s health payments support many retirees. Even so, it is clear that many companies are dumping or minimizing costs of health insurance. Fewer than 60% of workers now have company insurance. Something has to give. 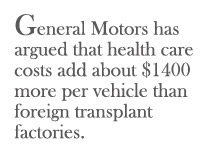 This logic of impending disaster lies behind the admirable initiative of the Obama administration to rein in health care costs. Some parts of this are politically, if not technically, easy. Giving incentives to computerize health records and reduce duplication and mistakes or allowing different doctors to share medical tests are examples. Extending insurance to all, so that expensive emergency rooms are used less and clinics more should also be uncontroversial. But other policies will force tough choices by both consumers and providers. Other necessary policies, such as only providing drugs or procedures that are proven to work, might be harder. Industry has lobbied against research that would better define such practices. Using palliative rather than aggressive end-of-life care is another difficult area, but one with potentially large savings.

However tough it is to change things, the current situation is absurd. More than forty million people under 65 live without any health insurance and many more have high deductible policies that discourage timely care. In contrast, Costa Rica a middle-income country with a good health care system spends less than a tenth per person of the US on health and has a life expectancy of 78 years! Clearly change is needed.

But what difference does this make except to patients and the health industry? Because the sums involved are so large, they make a difference to the US budget, economy and overall global capital flows. In 2007, US health care spending was $2.2 trillion and if tax breaks are included, the government covered nearly three-fifths of this. (Company payments for employee health insurance are not taxed as personal income.) 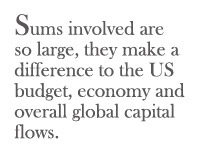 If the growth in health care costs over the next decade could be held to 3% (close to general inflation) instead of the expected 6%, US health care spending would be $1 trillion lower in 2017. Given the move to expand coverage, a substantial majority of that savings would show up in lower federal spending, deficits and borrowing. The Congressional Budget Office projects a $1 trillion deficit in 2018 under President Obama’s proposed budget and lower health costs could cut this by one-half to two-thirds. The cost savings would lower pressures on global capital markets and take less from domestic savings that might be invested. Even with such a slowdown, US health care spending would still be the highest in the world after ten years. The projected bankruptcy of Medicare, as recently forecast, would also be avoided and longer-term solutions to its solvency would be within reach.

Another perspective comes from developing nations. They too would benefit when borrowing in international capital markets. The benefits of capital flows are debated, but there is little doubt that sensible borrowing and investing can boost growth. If the US claimed $500 billion less in 2017 from international capital markets, that would mean more available for developing nations and on easier terms. This in itself might provide political and security benefits that would help reduce the need for US defense spending. 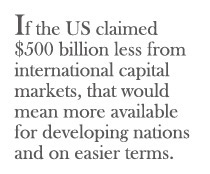 However, slowing down real health care spending so that it is about level in per capita terms has its dangers. Industry argues that restricting spending will dampen innovation, and it might. Private research is likely to decline if there is less revenue and profits. This could be made up partly through more public research or through tax credits. Or, perhaps, other parts of the world will begin to increase R&D and help to produce the global knowledge that ultimately advances human welfare, however uneven the initial gains.

Whatever the outcome, this is a game with very high stakes. If the US can find a way to make health care available to all for a moderate cost, it would make it easier to solve a huge number of related issues. Tax burdens could be lower. Other types of public spending could be higher. The burden of debt on the next generation would be less. And the US would have fewer frictions with other nations as it took a smaller chunk of global savings. Everybody should be hoping that these initiatives to control costs are successful. Failure would mean a weaker United States; weaker US companies; more inequality and suffering and a massive stain on the US political system, unable to solve a critical and massive problem that many others have figured out. It would suggest special-interest sclerosis so severe that it might be terminal.