Stopping the Iranian Bomb – Part I

In early January, Iran resumed its uranium enrichment program, claiming civilian purposes. Iran’s long record of clandestine activity in this regard, however, leaves only one conclusion – it is the first step toward weapons capability. The challenge that the world now faces is how to stop an oil-rich Iran from exploiting the current nervousness about oil price rise from going ahead. In a series, two non-proliferation specialists present their views on dealing with the challenge. In the first article, Gary Samore of the MacArthur Foundation recommends that the great powers of the world confront Iran with strong, unified opposition. The strength of such a coalition rests on Russia and China taking firm stances toward Iran, demonstrating the limit to any of Tehran’s strategic ties. Sanctions alone cannot compel Iran to abandon its nuclear program, but can play to Iran’s fear of international isolation. Pressure from the UN Security Council should accompany the resumption of multilateral negotiations with Iran, provided that enrichment activities are again suspended - and the US should add its weight to these negotiations. The world must convey to Iran that the risks of pursuing nuclear weapons outweigh the benefits. One goal of diplomatic initiative would be to gain time by reestablishing the suspension of enrichment activity as the basis for a negotiable solution. – YaleGlobal

Stopping the Iranian Bomb – Part I

Diplomacy may be difficult but the best course for the moment
Gary Samore
Tuesday, January 24, 2006 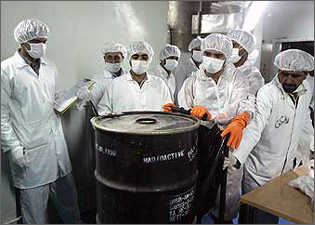 Unsealing a nuclear threat: Iran threw down a gauntlet by breaking the IAEA seal on a uranium enrichment facility

CHICAGO: In early January, Iran crossed the enrichment “redline.” This opened the way for Iran to acquire technology to make fissile material for nuclear weapons. In the face of the Iranian challenge to the non-proliferation regime, the international community’s options are limited. But however difficult, diplomacy may still persuade Tehran to step back - at least buying time before Iran reaches the point of no return.

There is reason for pessimism. Iran seems to have taken well calculated steps to acquire a nuclear weapons option. In early January it removed International Atomic Energy Agency (IAEA) seals on equipment and material at the Natanz enrichment facility and two related sites. In response, the foreign ministers of the EU-3 (the United Kingdom, France, and Germany) declared that two and a half years of negotiation with Iran to resolve the nuclear issue had reached a “dead end” and called for referral to the UN Security Council. The collapse of Europe’s diplomatic initiative reflects Tehran’s calculation that the balance of power has shifted in its direction. In October 2003, following the invasion of Iraq, when Tehran felt vulnerable to American pressure, Iran reached agreement with the EU-3 to suspend its enrichment-related activities in order to avoid referral to the UN Security Council. But after two years of fruitless discussion during which Iran rejected many European inducements to give up on the uranium enrichment effort, Iran toughened its position with the June 2005 election of President Ahmadinejad and removal from office of “pragmatic conservatives,” who may have been more willing to seek a compromise and avoid a confrontation.

Now, with the Americans tied down fighting the insurgency in Iraq and with the prospect of a friendly Shia-dominated government emerging in Baghdad, Tehran calculates it has a window of opportunity to advance its nuclear program while Washington is distracted. Once Iran has crossed this technological threshold, mastering the basic technology of centrifuge enrichment, stopping or significantly retarding the program through diplomatic or even military means will become more difficult.

In addition, Tehran calculates that the tight international oil market will protect it from serious economic sanctions, which could send oil prices through the roof. To buttress its position, Iran has cultivated better ties with Russia and China, who have taken the lead in opposing Western efforts to refer Iran to the UN. According to many Iranian experts, the hardliners around President Ahmadinejad may even welcome a measure of international confrontation over the nuclear issue, which they can manipulate to rally nationalist support for the government and re-orient Iran away from the West towards Russia and China.

What can be done? First and foremost, Iran must be made to feel that its pursuit of a nuclear weapons capability runs significant risks against a strong international coalition of the great powers. The key to building such a coalition is Russia and China. Fortunately, both Moscow and Beijing oppose Iranian acquisition of a nuclear weapons capability, which would damage their own national interests, by introducing a new source of instability into a region of vital economic and geostrategic importance. Moreover, both are annoyed at Tehran for ignoring their private warnings and precipitating an international confrontation by crossing the enrichment redline. Neither Russia nor China accepts Iran’s claims that its nuclear program is “purely” peaceful.

A week after Iran began removing seals from Natanz, representatives of Russia and China, along with the EU-3 and the US, met in London and agreed to call on Iran to restore the suspension and to schedule an emergency meeting of the IAEA Board of Governors in early February to consider referral to the UN Security Council if Iran does not comply. Sensing the danger, Iran rushed to express new interest in a Russian proposal to build a jointly owned Iranian-Russian enrichment plant in Russia for the production of nuclear power fuel, thus replacing the need for Iran to build its own enrichment facility. The two sides agreed to meet in mid-February to discuss the proposal, and Moscow now argues that an IAEA decision on referral should be deferred to the regular IAEA Board meeting in early March, to give Moscow more time to persuade Tehran to restore the suspension and avoid confrontation.

If it becomes clear that Tehran is merely playing for time, Moscow will find it increasingly difficult to resist the logic of referral, in order to reinforce IAEA resolutions that Russia has itself supported. Faced with a choice between his G-8 partners, who urge referral, and Iran, which refuses to restore the suspension, President Putin is likely to conclude that Russia’s ultimate interest lies with the G-8, especially since Moscow itself prefers preventing Iran from acquiring a nuclear weapons capability. Once Russia decides to support or abstain on a resolution of referral, China is likely to follow suit to avoid diplomatic isolation.

Inevitably, if Iran escalates and rejects the Security Council’s demands, the UN will need to consider targeted sanctions, such as imposing travel bans and freezing assets of Iranian officials and businessmen associated with the nuclear program. By themselves, such limited sanctions cannot compel Iran to restore the suspension if Tehran is determined to move ahead, but Iran is remarkably sensitive to avoiding the symbolism of international isolation.

To be effective, a strategy of gradually increasing pressure by the Security Council must be linked to an offer to resume multilateral negotiations with Iran, on condition that Iran restores the suspension of enrichment-related activities and provides greater transparency and cooperation with the IAEA.

Officials in the Bush Administration have advanced three objections to participating in bilateral or multilateral nuclear negotiations with Iran: First, they argue, engagement with Iran would help legitimize the Iranian regime and undercut US efforts to encourage democratic reforms. Second, they say, if the US spends some of its inducements to seal a nuclear deal, it would weaken American leverage on other issues of concern, such as Iran’s support for terrorist groups and opposition to the Israeli-Palestinian peace process. Finally, they argue that Iran is not serious about reaching a nuclear deal that would sacrifice its aspirations to acquire a nuclear weapons option and would likely cheat on any agreement.

While these objections have merit, they do not overrule the advantages of US participation in a multilateral negotiation. To avoid the mistake that allows North Korea to keep on producing plutonium while talks continue, any US willingness to participate in multilateral nuclear negotiations with Iran must be conditioned on Iran agreeing to restore the suspension of its enrichment-related activities.

For many Iranian officials, an American offer to participate in international negotiations would be unwelcome because Iran has used the absence of the US as one of its excuses for abandoning the EU-3 talks. Rather than rejecting the proposal outright, Iran might counter-propose a different international configuration to include countries more sympathetic to Tehran’s position. Even if new multilateral talks can be arranged, an easy solution should not be expected, because Tehran clearly prefers to retain its indigenous enrichment program. Only if Tehran calculates that the risks of pursuing a nuclear weapons option outweigh the benefits, will the Iranians negotiate seriously to see what they can get in return for giving up or deferring their fuel cycle program. In the meantime, the main objective is to buy time by restoring the suspension as a condition for seeking a negotiated solution.

Dr. Gary Samore is vice president for Global Security and Sustainability with the MacArthur Foundation. He was a non-proliferation specialist with the State Department and the White House under the Reagan, the first Bush and Clinton administrations.