Is Strategy For Victory in Iraq an Empty Package?

Nearly three years after the US-led invasion of Iraq, the White House has released its plan to bring stability and democracy to Iraq. Yet, while that plan adequately addresses the role that Iraqis are to play in securing their country, it must now be followed by a strategy that addresses the roles that the American public and army will play in that same long fight. At the moment, the American army is at war alone—without the support from American civilians that the military will need if it is to see the fight through to victory. Security expert Joan Johnson-Freese argues, the American people must now be called upon to make the kinds of sacrifices - both with life and money - that have served the country in wars past, and they must prove that they are still able to sustain such sacrifices for the long haul. The conflict in Iraq may have begun as a war of choice, but there is good reason to believe that it has now become a war of necessity. If America really needs to win in Iraq, the American people must be asked to give up much more than they have to make that victory possible. – YaleGlobal

Is Strategy For Victory in Iraq an Empty Package?

American people will have to support it with their children and wallets
Joan Johnson-Freese
Tuesday, December 6, 2005 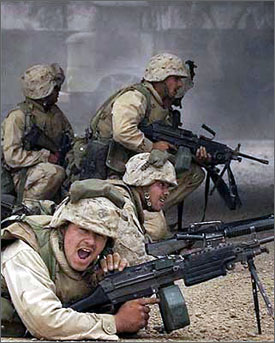 Need backup from home: US soldiers fighting in Iraq get rhetorical support, but there is no big queue of recruits to replace them

NEWPORT: The March 2003, U.S.-led invasion of Iraq was a big bet to change the fabric of the Middle East to one more amenable to U.S. and global security in the long term. Overthrowing Saddam Hussein was achieved with lightning speed. Nearly three years and 2,100 American casualties later the White House has released a strategy for securing and rebuilding Iraq as a viable democracy. The question now is, can this new strategy work?

Though many people felt it was initially a war of choice, and an unnecessary choice at that, many now believe it has become a war of necessity. For the U.S. to leave Iraq in the near term would almost certainly result in chaos, including some combination of civil war, fragmentation, despotic rule, external influence and minority oppression. The U.S. would lose considerable international credibility regarding its support for democracy and human rights; credibility already in short supply. Iraq could also become a haven for terrorists. 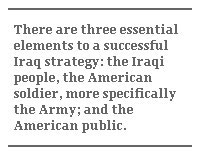 Accomplishing the new strategy goals will be hard. Iraq is a virtual Rubik’s Cube of cultural, economic, military and political dilemmas, with roots dating back to before the United States even existed. The new strategy seems to provide a way to start moving Rubik’s Cube pieces in a way that could, over a very long time, be successful. But, as Andrew Krepinevich reminds us in a recent Foreign Affairs article entitled “How to Win in Iraq,” there are three essential elements to a successful Iraq strategy: the Iraqi people, the American soldier, more specifically the Army; and the American public. The President’s strategy addresses the first of those, but what is clearly needed now is a plan for addressing the second and third elements essential to victory.

Osama Bin Laden’s 1999 fatwa predicted the United States would not have the staying power to fight a protracted war against terrorism, a prediction reiterated repeatedly since, including in 2004 when Bin Laden vowed a war of attrition. And while it sometimes seems true that the United States is a crisis-response society, expecting quick victories with low casualties from its all-volunteer military, the U.S. has also demonstrated staying power when the need was clear, as in the World Wars and later in Korea, where U.S. troops have now been stationed for 55 years. These were wars of necessity. In those wars, however, the entire United States was at war. The American people bought bonds, altered their way of life, and shared a commitment with the troops, who were called upon – and drafted – to serve in large numbers. 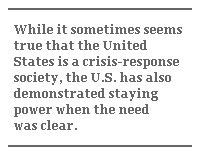 In the Iraq War, the military is at war but there is little to remind the American people of that fact. Other then higher oil prices and lines at the airport, life goes on largely untouched, with taxes even cut as the war costs escalated. Support for the troops was and remains high, but it is also easy to give, with patriotic stickers on cars replacing long lines to enlist, rationing, war bonds and the like, actions taken when “war” implied a clear understanding that sacrifice, economic and personal, was necessary. This is unlikely to continue much longer, as the willingness of the American people to spend almost $6 billion per month in Iraq, while roads, schools and the availability and affordability of health care in the United States are deteriorating, probably has limits.

More alarming is that these limits are already showing up in the Army’s ability to recruit. Even with signing bonuses of tens of thousands of dollars, the army is not meeting its recruitment numbers and it has had to raise the percentage of “Category 4 recruits” it accepts (that is, the least qualified). This is occurring while the army is becoming increasingly high-tech and, therefore, requiring increasingly well-qualified soldiers. It has also raised the enlistment age to 42 and offers bonuses to soldiers who get their friends to sign up. And yet, despite these efforts, it cannot get the numbers to sustain the current effort in Iraq much beyond another two or three years. Instituting a draft, especially for a war that was never fully sold to the American public, would be political suicide for anyone who proposes it (save for anti-war critics who hope that a draft will force the issue and raise national protests). Where, then, will the manpower requisite to execute the new strategy come from?

The U.S. went into Iraq leading a coalition of troops and the new strategy talks about expanding international support. While the U.S. still has 160,000 troops in Iraq, another 50,000 come from coalition forces. Perhaps increased coalition forces are considered the answer. But at least two of America’s allies in Iraq, Bulgaria and Ukraine, are withdrawing their combined 1,250 troops by mid-December, and a half-dozen others are debating pullouts or reductions. Last Spring, the Netherlands – a strong supporter of the invasion – had 1,400 troops in Iraq but today only 19 Dutch soldiers remain in the theater. Among other U.S. coalition allies, public support for operations in Iraq is deeply divided. Were Australia, Britain, Italy, Japan, Poland and South Korea to cut their troop strength more than half of the non-American coalition forces could be gone by next summer. Britain and Australia provide critical fighting and support forces. Japan and South Korea help with reconstruction efforts critical to winning the hearts and minds of the Iraqi people. Poland and Italy train Iraqi troops and police critical for an eventual handover of security responsibilities from the U.S. to Iraq, and eventual U.S. withdrawal. While President Bush praised Mongolia for its assistance in Iraq during his recent visit, a force of 120 Mongolians is insufficient to sustain the kind of presence needed during a U.S. drawdown. Relying on coalition partners, however politically attractive it may be, does not appear a viable long-term answer to the manpower question vital to strategy success.

So how will this long-term effort in Iraq be accomplished? Questions about the viability of maintaining support for the strategy at home, and within the military, loom large over the new strategy for victory in Iraq. A strategy is only as good as the ability to carry it out.

Whether the Iraqi War is really now one of necessity, rather than choice, will become evident based on whether the strategy announced on November 30 is followed, quickly, by a “Part 2” implementation plan. Unless the administration intends to count on an indefinite reliance on the redistribution of federal funds to support the war effort – which Congress appears increasingly unwilling to allow -- that plan must include tax increases, calls for sacrifice and, given the impossibility of a draft, creative ways to increase the size of the military. That creativity would likely include higher wages, much higher wages, which then ties back to either raising taxes or cutting spending on domestic programs. Either way, the pain quotient to the American public would rise. But, if it is a war of necessity, the American public must be made to understand that in clear terms – which usually means through both the wallet and their children. If Part 2 never comes, then Part 1 will become a hollow strategy.

Joan Johnson-Freese is Chair of the National Security Decision Making Department at the Naval War College in Newport, Rhode Island. The views expressed in this article are the author’s alone and do not represent the official position of the Department of the Navy, the Department of Defense, or the U.S. government.