As the fourth annual Summit of the Americas get under way in Mar Del Plata, a pressing question lingers in the background: Are regional meetings truly worth the trouble? According to Jeffrey E. Garten, Juan Trippe professor in the practice of international trade and finance at The Yale School of Management, world leaders' efforts would be better spent at home, developing and implementing forward-looking remedies for economic woes. Essentially, Garten writes, regional summits are most often a case of all talk, little action, and further, they undercut the already waning authority of multilateral institutions, such as the IMF and World Bank. More crucially, the gatherings obscure a fundamental fact: "Although countries in various regions naturally have common issues to discuss, the big economic questions are global – not regional – in scope," says Garten. He calls for a two-pronged strategy, with economic reforms at the national level combined with concerted action on a global scale, and points to December's WTO ministerial for a signs of progress – or lack thereof. Garten concludes, "The outcome could say a lot about globalization for the rest of this decade." – YaleGlobal 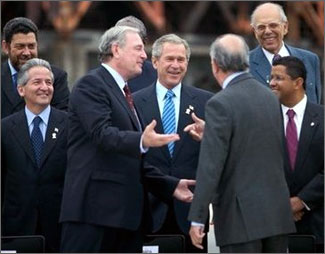 Trouble at home, fun abroad: President Bush with Latin American leaders at the Summit of the Americas at Monterey, 2004. Will this year's be different? (Photo: White House)

NEW HAVEN: From Brussels to Buenos Aires, world leaders have once again been packing their bags for rounds of summitry. They would do the world a lot of good if they stayed home and took the necessary but unpopular steps to right the listing global economy.

In late October, the leaders of the European Union gathered to discuss trade, finance, and jobs – and they are scheduled to meet again before year's end. This week, the heads of state of the western hemisphere, except Fidel Castro, are meeting to debate governance, jobs, poverty, and trade. And next month, the first-ever East Asian Summit, comprised of sixteen nations (and pointedly excluding the US) will be held in Kuala Lumpur, Malaysia. To be sure, these meetings constitute only a snapshot of the state of economic globalization in these waning months of 2005, but it is not a pretty picture.

In the first place, these regional summits demonstrate the limits of such meetings in terms of grappling with the most difficult challenges in the respective regions. The EU, for example, knows that a more competitive union is essential to compete with the US, on one side, and with Asia on the other. The leaders of Germany and France are most eloquent in outlining the particular measures that all countries on the continent should take – the need for more investment in R&D, for example, or the requirement for a more flexible workforce. But their own national policies are an entirely different issue. For almost a decade now, the EU has purported to have a program to at least rival US competitiveness, and every summit meeting features hand-wringing about failure to meet the targets. And as for the national policies of key countries, the directions are pathetic. In the most recent summit, for example, French President Jacques Chirac protested that trade liberalization was going too far. Germany's imminent coalition government was falling apart because of failure to agree on any major future policy.

These regional get-togethers also help clarify the winners and losers in the global economy today. For example, East Asia is a clear winner, and Latin America is clearly a loser – and Europe is quickly becoming one. Losers spend too much time contemplating their unique political, social, and economic models; they look inward rather than outward. Latin America, for example, keeps defining itself against policy prescriptions coming from Washington. Meanwhile, a positive vision for the continent is hard to discern. Europe is obsessed with debating the pros and cons of the Anglo-Saxon model. In both cases, there seems to be a search for an elusive third way between capitalism and socialism. Yet in most of East Asia, the focus is on growth, investment, and dropping trade barriers. No time for navel gazing there.

Third, there could well be a disturbing emerging trend, wherein both Asia and America, the two most vibrant parts of the world, disengage from more comprehensive global involvement. This could be happening for different reasons in each region. In the Pacific, for example, enormous effort is going into building closer economic ties among neighbors. A China-centric development pattern is arising, as many other Asian nations – not just developing Southeast Asian nations, but also Japan and South Korea – are becoming increasingly intertwined with the Middle Kingdom. There is growing economic interaction between China and India. Even the two Koreas are beginning to integrate, albeit slowly. Though the region will not be disengaging from the rest of the world, it is more preoccupied with its own backyard than with a broader notion of globalization.

The US is another matter. Although the Bush administration has toned down its anti-multilateral rhetoric, the United States has retreated from its leadership role in building an open world economy. This retreat is partly due to Washington's preoccupation with the Iraq war and other Middle East issues. Also, the administration deep down favors unilateral measures when possible, and relies on international help only when it gets in trouble (hence, the call for UN help with Iraqi elections and for other nations' assistance in containing Iran and North Korea). And US leadership has waned also due to its exceptionally large fiscal and current account deficits; the United States now borrows more than US$2 billion every working day to service its debts – thereby weakening its leverage in global economic matters.

The centrifugal forces enveloping America and Asia, combined with other regions' weaknesses, collectively constitute a big danger to the global economy. Although countries in various regions naturally have common issues to discuss, the big economic questions are global – not regional – in scope. The enormous financial imbalances between the US, Asia, and, more recently, the oil-producing nations can only be dealt with on a global scale. The issues of the environment, energy, poverty, pandemics, natural disasters, to name just a few, cannot be handled on a regional scale alone. And yet there is a huge void in relevant global capabilities, and no single nation or international organization is now able to constructively fill that vacuum.

The IMF and the World Bank, for example, are seriously reviewing their roles, and many of their sovereign shareholders too are unsure of the answer. The United Nations is mired in scandal, although some parts of it, such as the World Health Organization, still enjoy considerable support and confidence. A particularly egregious case of incompetence and eroding prestige at the center of the world economy is the Group of Eight. Forget for a minute that countries such as China, India, and Brazil are not even members – a fact that alone discredits the group's legitimacy. This year, the G-8 chair is none other than Russia's Vladimir Putin – a leader who is engaged in a rear-guard effort against two of the great trends sweeping the globe: increasing economic openness and democracy. both.

The absence of leadership at the center of the global economy may in fact be the crucial factor in evaluating regional summits. What the world needs most are more economic reforms at national levels and increased action on the global level. For a clear demonstration of this fact, look to Hong Kong in December, when trade ministers of the 146 countries of the World Trade Organization will meet to give a final push to the global trade negotiations dubbed the "Doha Development Round." In order for a satisfactory resolution, key nations will have to make big trade concessions – and this, in turn, will require adjustments in national policies.

If the Doha negotiations fail, or if the deal in Hong Kong is weak, the impetus toward more regional trade arrangements will grow, as would the centrifugal forces surrounding America and Asia. This turn of events would be dangerous, as these bilateral and regional trade arrangements are balkanizing a healthy, non-discriminatory global trading system. Moreover, the heavily unbalanced global economy requires that Asians continue to export to the West, lending their customers the money to purchase their products. Any hint of protectionism that might follow a breakdown of the Doha negotiations could result in a trade and financial crisis.

So watch the interplay between the events in the regional summits and in Hong Kong. The outcome could say a lot about globalization for the rest of this decade.

Jeffrey E. Garten is Juan Trippe professor in the practice of international trade and finance at The Yale School of Management.