Superclass and the Inequity of Globalization

The free-market principles that drive global trade of goods, services and ideas often run counter to notions of institutional regulation. According to David Rothkopf, author and visiting scholar at the Carnegie Endowment for International Peace, this void in global governance has facilitated the rise of a “superclass” of elites, numbering about 6,000, whose actions impact millions of lives. The global elite draw power in a new way, using international institutional linkages to form in-group affiliations that often run deeper than national allegiances. Without international organizations capable of ensuring checks and balances, along with decisions that win the approval of a global majority, the world is possibly more unequal than ever before, argues Rothkopf. Despite evidence that this “superclass” has wealth comparable to that of many countries, national governments remain wary of relinquishing authority to international governing institutions that could check the rising power of global private companies or individual members of this class. Conventional thinking still favors free-market principles over government involvement, undermining initiative for desperately needed innovation of global systems of governance that might best reduce growing disparities throughout the world. – YaleGlobal

Superclass and the Inequity of Globalization 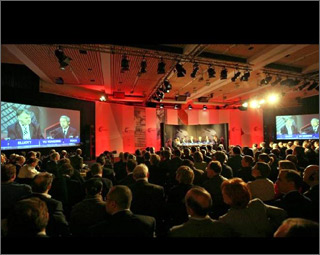 WASHINGTON, DC: Like nature, power also abhors a vacuum. On the global stage this has meant that thanks to weak or underdeveloped international institutions and a general lack of consensus as to how to manage this integrated and interdependent world, a superclass of elites is stepping in to fill the void. They pursue their agendas often unchecked by institutions representing the will of the people at large, operating with a freedom typically impossible in nation-states where the checks and balances of governance have evolved to help counteract the over-concentration of power in the hands of the few. What is more, the market-centric approaches regularly advocated by this private sector–dominated group seem to have resulted what may well be the most inequitable world in history, posing a palpable danger to international stability.

The power structure of a society is like any other product of its citizens, be it a city or a system of beliefs. It’s an artifact, a cultural fingerprint, one which distinguishes the society from past and future eras or from other civilizations and which can offer clues to the society’s rise and fall, the degree of order or chaos within it, and a sense of its collective priorities. Generally all citizens are touched by and help in creating the power structure and its internal dynamics through their actions, reactions or simply their tolerance of others’ actions. 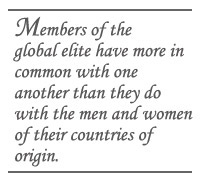 Today’s global elite offers an excellent window into the forces shaping our era and hints at the tensions that may shape the decades ahead. These international elites form a group that shapes globalization more than any other and at the same time is a small, coalescing community that has globalized far more rapidly than any other. Members of the global elite have more in common with one another than they do with the men and women of their countries of origin, reflecting a growing cultural disconnect between this global community and counterparts back “home.” Comparatively fewer members of this elite derive their power from political sources than similar international elites did, even in the fairly recent past. By my reckoning, nearly two-thirds of the contemporary global elite – the superclass of 6,000 described in my recent book – derive power from private enterprises that have grown enormously and frequently rival states in terms of their influence and the resources at their disposal. In today’s world, for example, the top 250 companies have annual sales equivalent to about a third of global GDP. More than 100 companies report annual sales in excess of $50 billion dollars, whereas only 60 or so countries report an annual GDP in excess of $50 billion.

Even accounting for the fact that sales and GDP are apples and oranges in economic terms (the latter measuring value-added), this gives a useful thumbnail measure of comparative wealth. The people who control these institutions rival in power most officials of big governments and far outstrip those from small governments. Exxon Mobil, for example, had profits last year that were greater than the GDP of Bahrain and Yemen combined. 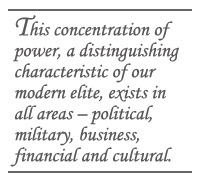 This concentration of power, another distinguishing characteristic of our modern elite, exists in all areas – political, military, business, financial and cultural. Of some 4,300 religions, only 20 have more than one million adherents, and only two have more than one billion. The 26 member states of NATO are responsible for 85 percent of all global defense spending, while one, the US, is responsible for more defense spending than all other nations put together.

Past elites were dominated by members who inherited power, and status was often linked directly to holdings of assets, notably land. Today’s elite draws more power from institutional affiliations and therefore is a more transient group, with members resigning, retiring or being dismissed from jobs and thus losing their influence. Networks have always played a role in enabling relationships among past elites, but thanks to modern travel and telecommunications, networks within this group cover far greater distances and enable alliances that touch far more people.

The requirement I used to define membership in the superclass is the ability to influence millions of lives across borders on a regular basis. Few people would have met such a standard even 100 years ago. I identified more than 6,000 individuals with comparative ease. But the exact size of the group was of far less interest than the changing nature of modern power and what that might imply. As a group, the 6,000 are unrepresentative of the global population at large: 94 percent are male, over 60 percent live on one side of the Atlantic or another, the average age is over 60 and, according to an analysis of a substantial sample, 30 percent went to one of just 20 universities. 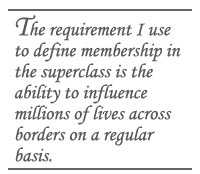 Even as globalization and the spread of market mechanisms have reduced absolute poverty in the world and raised the bottom in many societies, this era’s elites preside over a system that is the most unequal in modern history. Inequality has grown within countries and among them. A century ago, the wealthiest nations were on average nine times richer than the poorest; today they are more than 100 times as rich. Only 30 years ago, the richest nation in the world had 88 times the wealth of the poorest; today it has more than 270 times the wealth. In the US, nearly all the benefits of growth in the past decade have accrued to the top 10 percent of society; while the top .01 percent has seen incomes grow 112 percent, the incomes of the bottom 90 percent grew by only 2 percent. The benefits of global growth accrue to fewer people. The richest 1,100 people in the world today have a net worth that’s almost double that of the 2.5 billion people earning the least.

Such facts raise serious questions about the viability of the current global power structure, as most of history is littered with the story of elites that rise, over-reach and are brought down. But today, mechanisms to counterbalance these transnational actors have yet to emerge. Most countries are reluctant to cede sovereignty to the kind of global-governance mechanisms that might ensure that the future is shaped by the will of the many rather than that of the few. We have yet to reach the intellectual or philosophical threshold where we can even begin to question the widely accepted view, born of Western elites, that markets should be an ever less-fettered arbiter of the distribution of wealth, or champion an alternative to the failed policies of communism. 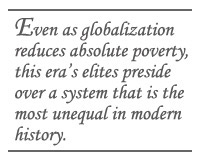 There is increasing evidence to suggest that high functioning markets, seeking efficiency as they do, favor enterprises of scale, which in turn puts more resources and power in the hands of fewer people, providing the broad benefits promised as their most important by-product at an unsatisfactorily slow rate. Yet markets offer great benefits, and governments to date have often been inefficient, corrupt or both. Supporting what is often deficient in order to manage the flaws of what is often super-efficient seems like a bad option, but there is no better one. We must begin to focus on how to innovate in the area of global governance with the same kind of creativity that we would expect of innovators in business, finance, science or the arts. But the first decades of the global era suggest a troubling phenomenon, and our tolerance of that phenomenon, our collaboration in accepting it, and the gross inequities that mark our era may well be seen in the future as one of the artifacts of our time by which history defines us all.

David J. Rothkopf is a visiting scholar at the Carnegie Endowment for International Peace and is the author of “Superclass: The Global Power Elite and the World They Are Making” (Farrar Straus & Giroux, 2008). His most recent previous book is “Running the World: The Inside Story of the National Security Council and the Architects of American Power.”