Taiwan’s Challenge to China and the World - Part I

With Taiwan's approaching referendum and presidential election set for March 20, the world is watching to see what Taiwanese voters will do and how China will react. The incumbent, President Chen Shui-bian, originally planned to ask Taiwanese voters whether they disapproved of Chinese missile deployment, but after intense US and EU pressure, he watered down the referendum's wording. Beijing is still upset, however, worrying that the establishment of referendum procedures could eventually lead to a declaration of Taiwan's independence. Washington has long insisted on a 'one China' policy and played to both sides of the conflict, while the EU has likewise drifted between supporting one or the other. Since the 1989 Tiananmen Square incident in China, EU and US officials have refused to sell arms to China. However, France and other countries have used loopholes in the embargo to sell dual-use technology to Beijing - and help keep their national defense industries afloat. In this first of a two-part series, Jean-Pierre Cabestan, a senior researcher at the French National Center for Scientific Research in Paris, argues that with increasing tensions, the sale of arms will become an even more destabilizing factor in the region. - YaleGlobal

Taiwan's Challenge to China and the World - Part I 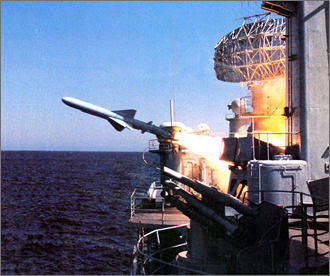 When Taiwan's 22 million people take to the polls on March 20, the whole world should be interested in the outcome. The presidential election - and the concurrent referendum on national security issues added by incumbent President Chen Shui-bian - will be a test not only of his domestic achievements but also his success in dealing with the Chinese threat and pressure from Washington. Taiwan is concerned that while the Chinese People's Liberation Army's ability to project its forces across the Strait is rapidly increasing, for reasons of its own the European Union is contemplating lifting the arms embargo imposed upon China in the aftermath of Tiananmen.

Last September, after Chen made public his intention to revise the constitution and draft a referendum law, Beijing renewed its verbal threats to resort to war to solve the "Taiwan issue". Taiwan is an integral part of China, says the government in Beijing, and any steps towards a declaration of independence could be cause for immediate military action. The referendum, Beijing feared, would be an occasion for Taiwanese voters to announce to the world that Taiwan is a sovereign nation-state. 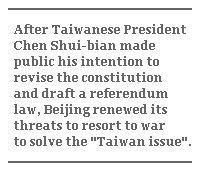 Even though Chen initially intended the referendum only to ask the Taiwanese whether they disapprove of China's deployment of some 500 missiles against the island, Beijing intensified its bellicose rhetoric at the highest political and military levels. This renewed deterioration of relations across the Taiwan Strait so alarmed US President George W. Bush that he issued unexpectedly blunt criticism against Chen on December 9th, when Chinese premier Wen Jiabao was visiting Washington. Ultimately, under pressure from both sides of the Pacific, by mid-January the Taiwanese president had moderated the content of the referendum, focusing the questions on whether Taiwan should buy more anti-missile weapons from the US and open peace negotiations with the mainland.

Europe has not been a bystander in this Pacific drama, despite how seemingly far removed it may be. Most notably, France has clearly taken the lead in pushing for the lifting of the embargo and letting the European Union's arms exports be regulated by the fairly liberal "code of conduct" approved in 1998. At first glance, Paris' motivation for supporting China's military build-up is two-fold: firstly, garner from China the political and economic rewards for such a stance; and secondly, address the French and European armament industry's hopes of selling sensitive military and dual-use technologies to China. France already has a few large deals in view, among them the Beijing-Shanghai high-speed train and the coming extension of China's nuclear energy program.

France's allegiances are somewhat fickle, however. In the early 1990s, the French government ignored Beijing's protests and agreed to sell warships (six La Fayette frigates) and jet fighters (60 Mirage 2000s) to Taiwan in order to save important pillars of France's national defense industry. There was no strategic calculus in these decisions. Thus, French President Jacques Chirac's latest support of Beijing may be seen as simply another manifestation of his country's shopkeeper diplomacy.

However, geopolitical concerns about France's and Europe's role in world affairs - in particular vis-à-vis the United States - explain, probably to a larger extent, Chirac's stance. He has not only pushed for the end of the embargo but also, on the occasion of Chinese President Hu Jintao's visit to Paris in late January, criticized President Chen Shui-bian's referendum plan in terms that went well beyond George W. Bush's critical remarks or even the recommendations of the French Foreign Ministry. He asserted that even Chen's revised initiative was "irresponsible", "aggressive", and "dangerous for everybody." Though this statement surprised many people - including people within his own Neo-Gaullist Party - it was a clear illustration of Chirac's multipolar worldview. Chirac aims to privilege closer relations not only with China but any country able to resist US domination of world affairs, whatever their political regime may be. Conversely, Taiwan is perceived by Chirac and the "European Nationalists" as a troublemaker and an impediment to their efforts to re-balance world power. 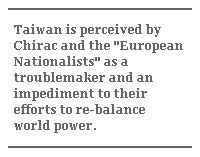 Although most EU member-states do not espouse this position, they are heading towards lifting the embargo. True, no EU consensus has so far been reached, and the next EU summit in late March will probably not manage to do so. France has easily convinced Germany to rally to its position, mainly because Berlin's very strict national regulations on arms exports would almost certainly forbid any weapons sale to China. But other EU nations are more hesitant, in particular because of China's lack of progress on human rights (a top Scandinavian concern) or the pressure exerted on them by the US (e.g., the UK). Moreover, though rather powerless, the European Parliament, echoing noticeable segments of European public opinion, has been another source of opposition to this decision, adopting several resolutions critical of China and supportive of Taiwan. Finally, the EU's inclusion on May 1 of ten new members, the majority of which belongs to the more pro-US "new Europe", will probably make any consensus more difficult to reach without addressing not only China's human rights problems but also the implications of ending the arms embargo for the military balance in the Taiwan Strait.

Still, the embargo may be lifted before the end of the year, in particular if a stricter EU code of conduct is drafted, giving more guarantees to and allowing more coordination with the US (and pro-US EU members). In any event, in the current post-Cold War environment, one can expect some EU arms exporters, such as France, to take advantage of the grey area of dual-use technologies. There are precedents to that: In 2003, the EU asked China to take part into its Galileo GPS observation satellite project, which is far from being solely a civilian operation. Beijing was too happy to oblige, investing US$150 million in it, putting pressure on the EU to get access to Galileo's military technologies so that China may spy more efficiently on Taiwan's defense infrastructure. 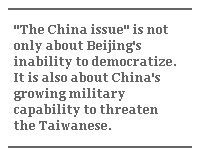 Having said that, China's shopping list will probably remain disappointing in the eyes of European arms traders: unlike Taiwan, China is not about to pay cash for a hundred Mirages or a fleet of European diesel submarines. It will continue to concentrate its demands on radar and sonar technologies (already provided by the British and the French, respectively, in spite of the embargo), avionics, guiding systems, aircraft engines, and satellite technology. Beijing wants to leapfrog to the most advanced military technologies without becoming over-dependent upon a Europe that, because of its NATO ties, may side with the US in a war over Taiwan.

Finally, regardless of what the EU might do, with the crucial help of Russia, and some EU as well as US companies, China has already managed to take advantage of economic globalization to acquire many of the technologies it needs to modernize its defense and intensify its military pressure on Taiwan. Chen Shui-bian's initiative has certainly been a clumsy one, especially as far as the consolidation of Taiwan's democracy is concerned. Nevertheless, it has reminded everyone - both European and US political leaders as well as high-tech and military technology exporters - that "the China issue" is not only about Beijing's inability to democratize. It is also about China's growing military capability to threaten its neighbors, and above all, the Taiwanese - a people that the Beijing authorities claim as their family.

Jean-Pierre Cabestan is a senior researcher at the French National Center for
Scientific Research, Paris.