Taiwan’s Challenge to China and the World - Part II

Beijing claims that 'the Taiwan issue' is an internal political affair, but many in Taiwan beg to differ. In the second installment of a two-part series, Linda Jakobson, co-author of the International Crisis Group's recent Taiwan Strait IV report, suggests a possible way out of the present imbroglio. On March 20, Taiwanese will take to the polls to vote for the next president and to voice their opinion on a controversial referendum on national defense policy. Taiwanese are wary of China's designs for Taiwan, Jakobson says, especially after witnessing Beijing's inflexibility with Hong Kong's democracy movement. What is needed to resolve the disputes over sovereignty and representation is “the loosest of unions, with all the ceremonial trappings necessary to facilitate the image of a unified China.” In this ‘Greater Chinese Union', China as a united culture would take precedence over China as a nation-state; the union would have a common flag and anthem, and China and Taiwan would be equally represented in a Supreme Council. Off the record, Jakobson maintains, Beijing would welcome such a loose association. But for such a bold re-configuration of political space to become a reality, she argues, the international community must offer safeguards to Taiwan and encouragement to Beijing. - YaleGlobal

Taiwan's Challenge to China and the World - Part II 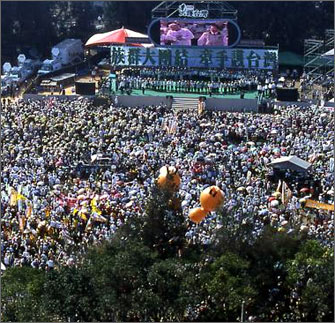 HONG KONG: As Taiwan prepares to hold its presidential elections and a controversial referendum later this month, tension is rising in the Taiwan Strait - an unwelcome development for global security. Despite Beijing's claim that the Taiwan question is an internal affair, it is a matter of concern for the whole world - intimately linked as it is with China's and Taiwan's stability. It is time for the international community to take a more pro-active role in seeking a long-term solution in the Taiwan Strait. For a start, China needs to discard the "one country, two systems" formula as a basis for unification with Taiwan. Beijing also has to find ways to win over ordinary Taiwanese.

The last few months have once again brought to light the fragility of the status quo between China and Taiwan. Domestic politics, not only in Taiwan but in China and the US too, are shaping the cross-Strait agenda more than ever. As Michael Yahuda wrote in YaleGlobal in February, now that Taiwan is a democracy its politics are even more unpredictable. The risk of a genuine crisis is real. 'Kicking the can down the road' for as a long as possible, as a high-ranking US administration official described US policy on Taiwan, can no longer be considered viable. 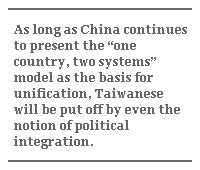 Any long-term solution to the impasse in the Taiwan Strait is based on the assumption that China has to first implement political reform. But during the years, perhaps decades, it takes for Chinese society to become more like Taiwanese society politically, much needs to be done to ensure that the two sides don't grow totally alienated from one another.

As long as China continues to present the "one country, two systems" model as the basis for unification, Taiwanese will be put off by even the notion of political integration. This federal model, with the autonomous entity subservient to the central authority, is the late Deng Xiaoping's recipe for integrating Hong Kong, Macau, and eventually Taiwan with China despite differences in political systems. Beijing's recent intolerance toward political reform in Hong Kong has convinced even those Taiwanese who are in principle not opposed to unification that the "one country, two systems" formula is a non-starter. Taiwan will not be subjugated in Hongkongnese fashion. 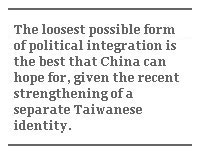 Several mid-level officials in Beijing acknowledge, in off-the-record conversations, the need to formulate a new unification model. They agree that the loosest possible form of political integration is the best that China can hope for, given the recent strengthening of a separate Taiwanese identity. Behind the scenes various options are being contemplated. But these ideas carry no weight as long as China's leadership remains boxed in.

The international community, especially the US and EU, has a role to play in promoting a long-term solution. Besides remaining firm in their opposition to the use of force by Beijing and the pursuit of full-fledged recognition of independence by Taipei, Western leaders should impress upon their Chinese counterparts that the "one country, two systems" formula needs to be replaced. Beijing has to be encouraged, nudged, even pressured.

A good starting point could be deriving inspiration from imperial China's philosophy of governance in the vast and diverse Ming and Qing empires: Orthopraxy (correct practice) was traditionally more important than orthodoxy (correct belief) - form before substance. A recent report by the International Crisis Group suggests as a model the loosest of loose unions, with all the ceremonial trappings necessary to facilitate the image of a unified China, i.e. the union would have its own anthem and flag. Ritualistic meetings of a supreme council, formally in charge of the union, could be held annually on historic anniversaries.

China and Taiwan would be equally represented in the supreme council, with each entity being responsible for the jurisdiction and governance of its own territory - just as they are de facto today. China would remain the sole occupier of the 'Greater Chinese Union's' seat in the United Nations' General Assembly and Security Council, but Taiwanese delegations, under the heading 'Taiwan, Greater Chinese Union', could work within UN sub-organizations like WHO, UNESCO, UNICEF, etc.

With both sides approaching the sticky question of sovereignty in an unconventional way, Taiwan would give Beijing 'face' in its quest for unity by belonging to a 'Greater Chinese Union'. In return, Beijing would acknowledge Taiwan's need to safeguard its political system and enjoy more international space. 'One China' has to be defined in the most abstract of terms, along the lines that China's Qian Qichen touched upon in July 2000: In the world there is one China, and both mainland China and Taiwan are part of China. In Chinese, the character used for 'China' (hua) can also refer to Chinese civilization or culture, not necessarily the Chinese nation.

International safeguards will be a Taiwanese condition to a union of any sort. Beijing, after all, very much depends on the international community to uphold the present status quo, despite its claim that the Taiwan question is an internal affair. Why should Taipei not insist on outsiders' involvement in its future? On this point too, Beijing officials privately acknowledge the need for modification of China's stance.

However, Beijing also has to convince ordinary Taiwanese that it is sincere when it claims it respects Taiwanese society. At present, Beijing's Taiwan policy relies on pressure from the United States against perceived moves toward de jure independence and on the lure of economic prosperity. Beijing is convinced that the more dependent Taiwan becomes economically on the mainland the more willing the Taiwanese will be to accept unification. Already today, Taiwanese investments in China exceed $100 billion, and a million Taiwanese live on the mainland. But economics alone will not woo the Taiwanese over to China's side.

China needs to be more inclusive, not exclusive in its Taiwan policies. Beijing's attempts to isolate Taiwan internationally understandably infuriate Taiwanese. Wherever Taiwanese venture in the world - at conferences, exhibitions, charity events - Chinese officials try to ostracize them, lecturing outsiders on the 'one China' principle.

Taiwanese belong to a well-educated, democratic society; there is no reason for other countries - fearful that access to the Chinese market will be denied - to permit Taiwanese to be treated as pariah.

Embarking on a diplomatic charm offensive, as Chinese leaders successfully did in Southeast Asia last year, would be an impressive beginning to a fresh unification drive by Beijing. Allowing the Taiwanese to indulge in the euphoria of the 2008 Summer Olympics by granting them the baseball event could foster a feeling of Chinese-ness among Taiwanese, something Beijing so intently hopes for. Inviting along a Taiwanese taikonaut (astronaut] on a Chinese space mission would be another ideal sphere of bonding.

Regardless of who wins Taiwan's elections on March 20, Beijing has to come to terms with the winner for the next four years. By acknowledging the voters' choice with a series of goodwill gestures toward Taiwan and, above all, by putting forward a new unification formula, China's leaders could slow down the growing trend of animosity toward Beijing among Taiwanese and start a genuine process of political integration. It will be a long road.

Click here for the The ICG Taiwan Strait IV report in Pdf format.

YaleGlobal Online © 2004 Yale Center for the Study of Globalization